A rundown of 2015 on LPMCC.net and the activities of past members and friends.

The past year saw LPMCC.net making steady progress. We began on a high note with our best ever visitor numbers in January when 11,506 people clicked onto the website. We also busted 10,000 in June and July and numbers have only just dipped below 9000 per month.

Many of our visitors are from continental Europe, drawn to the website by our European Rally List. We try to help those who do not speak English by providing a Google translation service - that's what the oval country plates below the left hand menus are for.

Content is king so we are especially grateful to everyone who has contributed new material to LPMCC.net over the past twelve months, whether it is a whole page with photographs or a single line comment.

However special mention must be singled out for Hans Veenendaal and Phil Drackley.

Hans continues to labour diligently to keep our list of continental (and UK) rallies in demand across Europe, even while he is off on one of his tours of the forests on his faithful combo. Phil (the Spill) maintained an unceasing production of fully illustrated rally reports from days of yor despite moving house and home in the middle of the year. I'm pleased that neither of them show any signs of flagging.

As reported every year we still have a backlog of badges to add to the extensive collection. It's one of those jobs that I always seem able to nimbly dodge. Maybe a subject for a New Year Resolution?

Let that be an incentive for you scan or photograph your badges to add to my guilt trip.

For our July 2015 National Rally Control we welcomed assistance from the guys and girls of the East Midlands Bikers who also fielded four riders in the competition. I am hoping they will be enthusiastic enough to volunteer assistance this year as we need all the help we can get to handle the crowd that flows through Kegworth Control.

We again produced an interactive matrix for the NRR that is a great help in plotting an optimum route. It is even possible to plot it backwards from where you want to finish and then reverse it. Then transfer your route to your smart phone or tablet to take with you!

Riders passing through Kegworth were snapped on camera and indexed in our searchable photo page. On request we email the full size picture to competitors who can identify their photos.

What it's all about.

Past members and friends have had many motorcycle rides and holidays through 2015. More than a few have bought new motorcycles and this year's Motorcycle Live saw moths flying out of cheque books as they emptied the stalls of helmets and other kit. 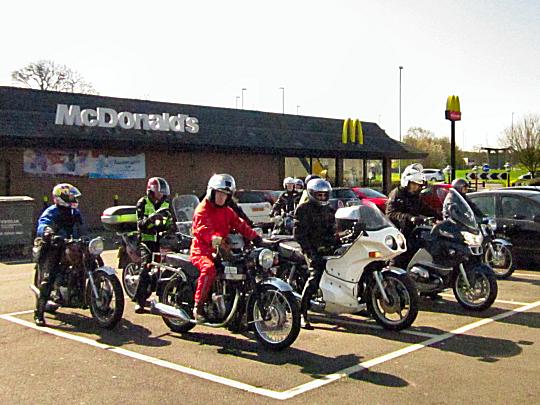 Most of our motorcycling photos are on our Facebook page.

Motorcycle rides, usually on weekday, are planned at a moments notice using texts and telephone calls. If you want to join us on a ride you'll need to let us know your contact details.

Going over the hill, at snail's pace.

The Embers Cycle Group has had some ups and downs this year and I don't just mean the hills! Our Spring Tour based in Exmouth was little short of a disaster when most of the group were hit by an illness.

Photo from Exmouth before the bug struck. Roll your mousewheel to zoom into this photo.

The group pedalled on through the year, sometimes in rain, often with punctures but always with high spirits.

We managed to get through 2015 without the frequent website outages that plagued the previous year, but that was probably by good luck. Hackers are beginning to attack website servers in the hope of extorting money but so far we have not been targetted. If you find LPMCC.net off-line in 2016, please be patient and come back later.

Not so many changes to the website and you probably didn't notice most of them.

There were many small improvements and corrections but the general appearance and operation of LPMCC.net has remained unchanged so you didn't need to learn new tricks.

What is coming next

As we plough the rich earth of 2016 we should be able to look back at the straight furrow leading from past rallies and motorcycle events. Dig into your memory and photo albums to share those great times with friends and make an effort to get in touch with old pals.

Soon we will have over 1500 pages for you to explore and hopefully we will climb back to over 30,000 page views per month.

If we are inundated with material for the website we may need to pay for a larger server but we will meet that problem when it happens.

Thank you for supporting LPMCC.net over the past year. Keep coming back for new content and old friends. Pass the word to surviving like-minded souls. Click on an advert from time to time to make sure we can afford that bigger server!