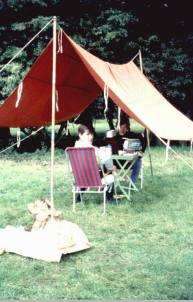 The Coventry Antelope Motorcycle Club had its own headquarter in Coventry and was a popular evening run for the Leicester Phoenix.

Terry Reynolds went to the rally in 1977 and liked it so much he bought the membership as well as writing a report for Megaphone.

I think the campsite was near the Alvis test track. I'm sure I recall hearing the armoured vehicles going round the circuit. For all I know we might have been camped on the grounds and been under their tracks.

Jan Heiland recalls that rallies were at Baggington at the end of October.

Les Hobbs captured some of the rallyists at the first Antelope Rally.

Here is an addition from Paul and Lynda Dunn

I remember going to the Antelope rally in 1975 or 76. The reason I remember it so well was because it was my birthday that weekend! A few of the Phoenix members disappeared on the Saturday afternoon and took Lynda with them.

A bus had been laid on to take us to the pub and during the course of the evening I found out where they had been that afternoon when a "dougal" birthday cake arrived at our table. I seem to recall a some what large biker coming over and asking if he could "eat Dougals head". He meant the one on the cake of course and not Derek Jordan!

I also remember that as we left to get back on the bus someone was "lighting up" the rear tyre on a Benelli Six before letting us all hear it go off down the road.

The rally was indeed held next to the Alvis site and I seem to recall an electric fence and the need to be careful when taking a "pee". Shocking!

Please note that the Antelope Rally is up and running again! The event is held at Barkers Butts Rugby Club, just outside Coventry. It's in June. Tickets are only £10-00 and that includes the badge. We look forward to seeing some more faces from the past!

We never did this rally but it was the Antelope MCC that did all the food for the Three Spires' Mad March Hare rallies. All homemade currys, chillis etc. I remember their chilli con carne would set your mouth on fire.

The very first member of the Antelope MCC I ever met was Maurice Paul Strawson. I met him at the 1974 edition of the Madonnina dei Centauri in Alessandria, Italy. He was riding then a 750cc Suzuki. If I well remember, Maurice was working in Guernesey. I was representing France that year and entered the Castelazzo Bormida cathedral with my 125cc Honda mono. So did Maurice who was representing England.

Later, I met Rodney Taylor, who was one of the pillar members of the Antelope club. Rodney, who was living in Rugby, was one of the rare British bikers in the seventies and eighties to be invited to the elite circle of French rallies by invitation. He was a good friend of legendary bikers such as Christian Blanchot (Kiki), Raspoutine, Beru, and yours truly. He gave me hospitality many times at his home during the years I was riding in the UK to attend motorcycle rallies. So I had a very special bond with the Antelope MCC.

In 1978, I decided to attend their rally. Just two weeks prior to their event, I had an engine problem with my 850 cc Norton Commando. No way I was going to cancel my plans to go to Coventry. I had committed myself to my Antelope mates that I would be coming. So I had to keep my word.

I went there alone. This on a 49.9cc moped Motobecane (no gears). It took me 5 days round trip from Clermont-Ferrand.

Unluckily, the ferry-boats were on strike in Dieppe and Newhaven at that period. So I had to go to Oostende in Belgium to reach England.That round trip ride on a moped was about 1800 kilometers. No need to say I had a sore ass on arrival back home after that many days seated on a moped saddle.

A nice reward though is the trophy of the longest distance by a foreign angler I won at the 1978 Antelope MCC rally.

That's in short some of the memories I have of that great club from Coventry, and the nice friends I had from that club.

The 1973 Antelope was my second rally and the furthest I'd been from home. As for transport it was probably my A10 combo.

Memories fade (well it has been 40 years) but I do recall trestle tables, strip lights and a queue to buy crates of Newky. One or two heroes passed with their arms round their second crates having finished the first.

Was I green? When smeone called me 'our kid' I had to go check with Les Hobbs if he was being friendly.

But I do remember the warm welcome that helped confirm rallies as my main activity for years to come.