This was organised by the 'The BMW Club'.

The ones I have done were held at Glen Helen, on the TT course. This is one of many one make club events that are held on non-race days during TT week on the Isle of Man. It creates a bit of a problem if the races are rescheduled as you can only get to Glen Helen when the roads are open and in any case the car park is full of spectators vehicles on race days.

We used to go to this event even before I got my BMW as we did with all the various other one make club events. Not really being a race fan I always enjoyed these rallies and shows as much as the actual racing.

One year in the late 70s I went there with Bill Stephenson and his wife Cath who both had Honda outfits. The rally was always popular and parking could be a problem with a sidecar. Bill had lifted a rope up out of the way for Cath to get past but had been spotted by a German marshal who was determined not to let any Hondas park in the BMWs only area. He dropped the rope and nearly took Cath's head off! Well, I thought World War 3 was about to happen but after Bill's quite graphic description of what he was going to do to the German with the rope (probably technically and clinically impossible) the German said that Bill was the most rude person he had ever met on the Isle of Man but didn't try to stop Bill parking! 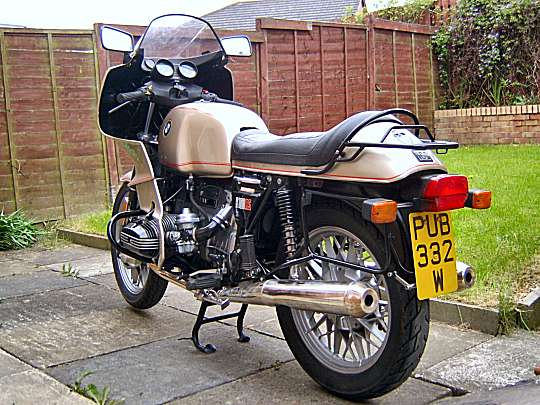 There was always a good display of new and old BMWs from all over Europe. All the BMWs in the car park were judged for a variety of awards which were presented at the evening social at the Glen Helen Hotel.

In 1992 I managed to win 'Best Post 70s Boxer Twin' with my R100RS. It made the morning I had spent polishing it worth while.