The challenge after the Dragon had to be the Elephant Rally. Held during January at the Nürburgring race circuit in the Eifel Mountains of Germany. In the early Seventies, guaranteed deep white snow.

The first time I went on this rally I was on the AJS 500 solo while Dave Parry and Derek Foster rode a Matchless twin combination. I only fell off once on the way there but it snowed heavily before we set off back. 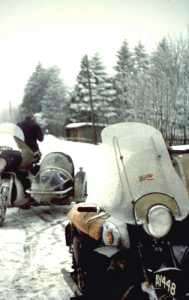 I just couldn't stay upright when I started for home and it took all day to get to Blankenheim where we gave up and enjoyed a warm night in a Gasthof. There we met riders from the Leicester Query Club. It's a small world. Over night there was even more snow and I set off alone for the ferry while Dave and Derek did some sightseeing. I caught the late night ferry for Dover and was really glad to see dry roads in England. I got digs in Dover and was woken early the next morning by the sound of revving engines as the lorries struggled to get traction on the hill out of Dover. It was snowing a blizzard and before I got started the A2 through Canterbury was closed to everything but a desperate solo motorcyclist. I reached the M1 as it got dark and my lights had long since packed up. So I got behind a lorry and followed it the last hundred miles home.

After that experience I did not attempt the Elephant solo again for five years. The following year Derek Foster and I took a Panther 600 cc sloper with a large sidecar. The Panther is a split single with two exhaust pipes from one cylinder. A jacket was brazed onto one pipe and this heated up a gallon can of water in the sidecar. The Panther drew a lot of interest in Germany. After the rally we took a break in Amsterdam and had lots of adventures in the freezing fog.

On one stage of the journey the front brake cable froze solid. I wasn't very concerned as we were only travelling slowly in the freezing fog and doing all the braking with the rear brake. I visited the lavatory when we stopped for fuel and when I returned to the forecourt Derek was furious. "Why didn't you tell me the front brake wasn't working!" he demanded. "The foot brake is fine." I explained. "Not when I'm riding it away from the fuel pumps sitting sidesaddle. We nearly had to walk home from here." 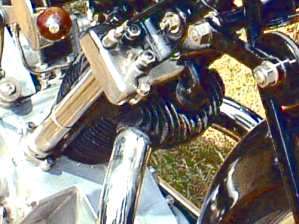 On another stage the carburettor froze open and I rode on for twenty minutes waiting for it to rattle free. In the end I turned off the fuel and hoped it would stop before we passed our turn-off.

The closest squeek we had was when an oncoming articulated lorry jack knifed his trailer across our path. The lorry couldn't stop and neither could we. At the last second the lorry driver hit the accelorator and pulled the trailer back into line.

For the following three years I took the AJS with a Jet 80 sidecar. The Jet 80 was made by Swallow Sidecars who changed their name to SS when they turned to making cars. During WW2 they changed their name again, this time to Jaguar.

Just because we were riding on the continent never stopped us riding on the left. Usually by mistake following a stop for food we would remount in a relaxed state and set off on the wrong side of the road, amused at the antics of the locals swerving out of our way. On one occasion we did it on purpose.

We gave up camping at the circuit for comfort in Brand just outside of Aachen. There we got to know Willy Press as he improved his gasthof Haus Press to a hotel and eventually bought a large hotel in the city. I also met Alan and Cynthia Dean here and listened enthralled to their tales of FIM rallies and Partitours with the International Motorcycle Tour Club. A new chapter opened. Summer continental tours. After years of winter rallies and camping in the snow the tours with the IMTC were paradise.

The last Elephant I did in the mid-Seventies was solo, this time on the 350cc heavyweight Matchless, the same one I rode to the Yugoslav FIM rally.

Here is a video from YouTube that captures the journey.

These are the only pictures I have been able to find at the moment.

In the the third picture you can just see my Matchless in the right hand corner. This is before I twisted the forks on the way back, but rode home not being able to walk straight the next day.

Don't suppose being unable to walk straight had anything to do with duty-free whiskey!

I went to the Elephant at the age of about 8 I think, which would have been 1972, with my father in a party of four outfits. I can remember the whole weekend from start to finish as if was yesterday.

We started our preperation months before with my mum obviously worrying about me going. One outfit was a BMW R60 imported from Germany and then the sidecar was altered to the right which in itself was a task. Another was a brand new Moto Guzzi Le Mans with a Steib sidecar. Then a featherbed framed Norton Commando, again with a Steib sidecar and our gem was an ex AA side valve BSA. All the bikes had leading link forks made by my father and one of the other drivers, Mike Sale. On the outfit with Mike was his son Shane who was a year older than me. The Guzzi was ridden by Clive Sale and his brother Barry in the chair, who went on to be British grasstrack champion in the juniors. The connection between all the friendships was actually the grass track. The BMW pilot was Roger Agget who was originally going on his own until the night we were saying goodbye to the families for our weekend away when Peter Sale decided he wanted to come as well. The only problem was he hadn't any of the kit we had - cup, plate, etc - and more importantly, the layers of clothing we had. But he was determined so off we set from St Pauls Cray to Mottingham to collect Peter's race leathers and boots (Peter was a GP road racing sidecar passenger). That was all he had to wear for the entire weekend.

I was in Germany back in the '70s - and attended the Elephant Rally in '70 and '71. I had a Zundap KS601 with a Steib "Zepplin" sidecar. Unfortunately I returned to Norway for a holiday and my Green Elephant was stolen - well, the engine and front forks were taken - I wound up selling the sidecar.

When I returned to the United States, somebody decided that they liked that pin more than I did... So, it disappeared...

Is there anywhere that I can get a pin with the hangers?

Best chance of replacing lost or stolen badges is to keep a watch on eBay. Otherwise you can make a tee-shirt that will be lighter on your wallet and your shoulders.

Margaret and myself were honorary members of the club that had their clubroom at Machtemesmuhle and started the Elephant Rally at a camp ground that was owned by a friend.

Unfortunately there was a shooting at the Ring one year, so the rally was moved further across Germany.

When Joseph retired the local builder took over and spoilt the clubroom. The club then moved and we gradually lost touch.

Just before he died we did have Joseph over here for a holiday.

Done this great rally several times myself starting in 1981 when it was held in Saltsburgring, always solo starting with a Kawasaki Z400 twin then a BMW R65 then an XJ900F Yamaha

The first time I rode all the way back home with only coffee stops, 19 hours all in - the things you could do when you were younger!

Did this ride back in '72 while in the army. Had a Triumph. Remember it was cold as any Chicago winter that I have ever been in. I have proudly wore the pin I got on my vest up until this last weekend when it must have fell off. If anyone can direct me to somehow replacing my beloved pin I would forever be in your debt, perhaps a place to stay if you're ever in the Arizona U.S.A. area.

In '69 I went on a Triumph Bonneville and Steib fitted on the continental side. My mate had a Norton Atlas outfit.

After a few drinks in the Sport Hotel at 10.30 on a freezing, starry night, I thought a lap of the Ring would be something to do! I set off first with my mate behind. A couple of corners later I slid into the snow at the side of the track and he passed me. A few corners later he did the same. This continued for the rest of the lap. Coming down the end straight flat out it was absolutely freezing!

In over 50 years biking this was one of my most memorable rides. Great being a nutter isn't it?

For the latest information visit the Bundesverband der Motorradfahrer website.

To capture a flavour of the Nürburgring Elephants you should explore the Altes Elefantentreffen am Nürburgring website that has photos, stories (auf deutch) and even the Elephant Song.

It to me is what biking is all about. No matter what the weather, just a great thing to do. Touring in England or on the continent. Just great.
What an adventure, surperb...

Very interesting.
My friends and I are planning a trip to the rally.