It was bloody freezing but what the hell. The main "Gonads" party were in situ and from memory included the likes of Dave and Angela Wood, Brian Burgess, Alan Dunnicliff, Ronnie Burgess, John Jocys, Sid Beaumont, Brother Alan and wife Sylvia and myself. Think Les Hobbs may have been there too.

The pub was small and like a furnace due to the real coal fire so we wrapped up and retreated to the car park at the side of the frozen canal. It was a crisp sunny day and we were expecting the arrival of Andy Beresford with no little trepidation. Andy was nicknamed "snot green" mainly due to his luminous green helmet. A brilliant mind but with zero practicality, he broke, bent or crashed everything he touched. Therefore, anyone who had a similar occurrence was known to have had a "snot green".

I actually won the "snot green" award at the TT that year for losing my wallet!

In short time, like something out of an episode of Wallace and Gromit, Andy's helmet was spotted in the distance. Aboard Mike Shepherd's Honda 750 F1 (he'd crashed his Guzzi the weekend before) and true to form, he pulled into the pub car park. Grabbing a large handful of front brake he locked the wheel on the loose surface and dropped it. His girlfriend slid down the car park as Andy sprang to his feet and said, "where's my pint"?

We sorted the carnage, dusted the girlfriend down and got down to some serious drinking.

Later that evening we once again had to endure the stifling heat of the coal fire and two or three people had gone outside to get some air. Snot green had been banished to a seat in the corner having wiped out a table of drinks. Stood talking to us as we sat drinking, he turned to go to the toilets. His jacket open, the camera in his pocket travelled in an arc and sent at least four pints to the floor. 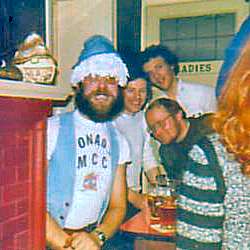 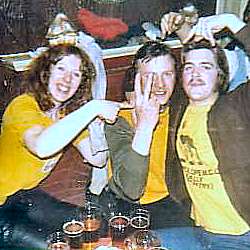 By now the heat was unbearable and the landlord didn't want to know. So. A chain was formed to transport pints of water from the toilets and little by little we extinguished the fire.

Some ten minutes later the "fresh air" party returned with a wet and shivering Alan Dunnicliff. He'd been looking at a boat and fallen into the canal through the ice!

I know we re-clothed him but whether we re-lit the fire I can't really remember. Anyway he's alive and well and living in New Zealand. 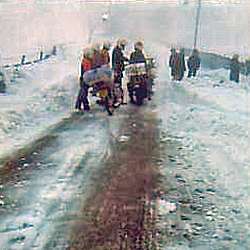 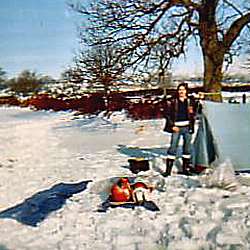 The Phoenix Rally of 1979 was held in the village of Ipstones, Staffordshire 19th - 21st January.

A young lady in my local bar was intrigued to learn exactly what happened at these "Rally" events and so it was that another baptism of fire was about to happen.

Leaving Oldham early on Saturday morning, the roads were wet and large flakes of snow were fluttering to the ground melting on impact. No problem.

Much the same through Stockport and out onto the A523 Macclesfield Rd. Now things were deteriorating a tad and by Macclesfield the road was a thin layer of compact snow. Two miles back I'd gone over a slight rise in the road. On the upward side is was clear on the downward side the bike was snaking side to side on the compact snow. Two up with the camping gear on, I just sat tight and rode it out knowing that any attempt to brake would have been suicidal.

The warning had been given!

Matters got worse by the mile and progress was now laborious. By Leek we were riding on some 4 inches of snow.

Taking a break in Leek, I pondered the thought of turning back but that was soon dismissed. Was it determination or sheer stupidity? Just then a Policeman drove past and enquired as to my destination. On telling him he started laughing and drove off with the words "you've no chance" flying out of his window. That was it then. Onward and upwards!

Don't think the young lady on the back could quite comprehend what was going on. Back on the CX500 I set off and on attempting the first left turn - down we went at about 2mph. No damage, no injuries, off we go again.

The journey from Leek to the B5053 down into Ipstones village was without doubt the worst ever to date. The road was deep, compacted, rutted snow and there were cars abandoned at the side of the road in drifts. On we went and eventually reached the B5053.

We were confronted by a wall of snow across the village road but we could hear a tractor some distance away. A farmer was "digging out" the village. We stood and froze for an eternity and a couple of other mad fools turned up. Eventually we got down to the village.

It had taken eight hours to do fifty miles!!!

1977 Phoenix with Steve Cawthorne capering about
Photo from Heather MacGregor

The campsite was at the top of a hill. A few had drove up and pitched their tents but I was more concerned with getting back down in one piece the following morning. After some deliberation I strapped the tent and airbed to my back, got the pillion to take the sleeping bags and grabbed the tank bag as we walked up to the site. I was knackered.

We spent that night in the pub with Ronnie and Jenny Burgess who were the only other Gonads to get there a little after us but I think they were on Jens outfit. From memory I think there were some 250 people booked in and 50 of us made it.

On the Sunday morning we went out of the village the other way, through Stoke and onto the M6.

Definitely a badge to treasure.

Well told - like the pics -
brings back a few memories.