Organized by the Sandymount MCC Dublin.
(Probably named after the Hill of Tara in Dublin.)

When I was over for the Shamrock Rally, Lorcan Casey and Mick Macnamara from the Sandymount club invited me to their club event, the Tara Rally. 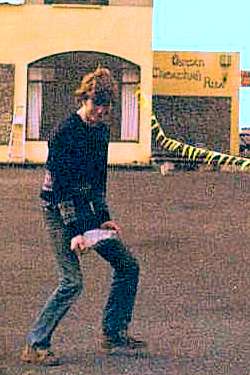 I had recently got myself a Suzuki GS1000, and was keen to show it off to them. So with Phil Johnson as pillion off we went again on the B&I boat from Liverpool. We left the duty free booze alone this trip and got some sleep on the way over the Irish Sea.

When we got to the Rally all the lads from the Sandymount club were impressed by my new bike. They told me that there was only one other GS1000 in Ireland, and Dr Margaret OReagan was there on that.

The Rally was based at a Hotel, but I can't remember where it was!

On the Saturday evening there was a dinner for all the rallyists and after that there was a disco. The sight of Dr Margaret in full evening dress, accosting her next dance partners was truly frightening, so we retired to the bar and settled in to do some serious drinking. 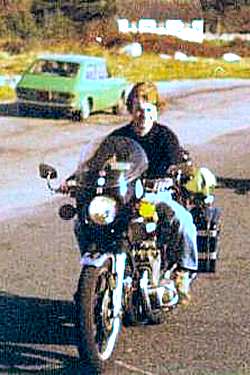 I hate to admit it but we were outclassed, because when we came down for breakfast on the Sunday morning the really serious ones were still in the bar!!!

I went over again the following year, this time on a GS850 shaft drive, and stayed over until the Monday.

On the way back to Dublin on Sunday I followed Mick, Lorcan and Jack Doyle as they toured around taking pictures for a photographic contest they had entered. I had a struggle to keep up, despite my new bike but, as I had no idea where we were or where we were going, I had to! 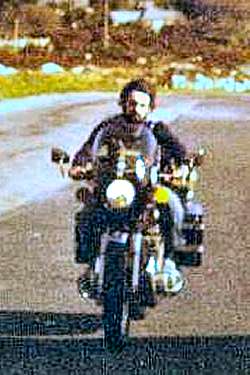 We called at one or two pubs that afternoon. At one of them I was surprised to be told to park my bike with its number plate out of sight up to the wall. When we went in I wasn't allowed to go to the bar and was told it might not be a good idea to talk to anyone not in our group. When we got back to Dublin I asked what all this was about. I was told that all afternoon we had been crossing in and out of Northern Ireland on "unapproved" roads and that in Armagh, due to the "Troubles", I shouldn't really expect to be made welcome in the pubs that the Dublin lads could go in!