The Thistle is organised by the Forth Valley MCC and 2009 was the 41st rally. For the past few years it has been held at a site near Biggar, in the grounds of a large Hotel. 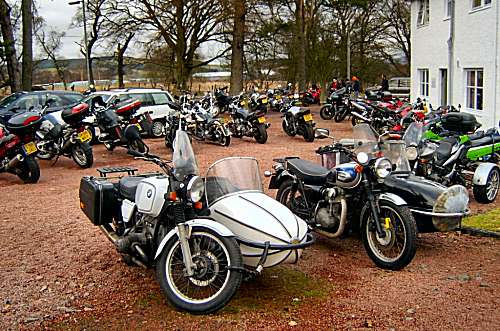 A three course meal for only £8.50 in the restaurant, silver service etc a bit posh for a rally but it made a change ...

The Rally has grown a lot in recent years and unfortunately suffered a few problems this year. The Forth Valley Club were working very hard all weekend to sort things out. Parking was one problem and it was the number of cars on site that caused it. Are they all staff?

On the positive side there was lots of entertainment with several bands in the main concert room. There was a jam session in the hotel bar Saturday afternoon.

If the Bands and Disco were not your thing there was plenty of room away from the noise to just chat and have a few drinks. 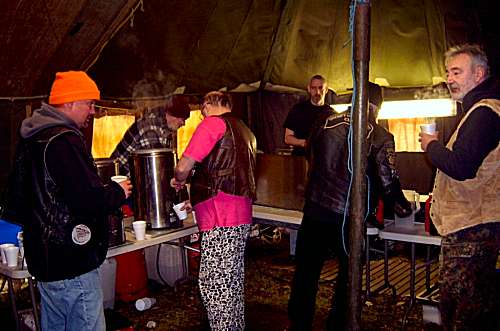 The food arrangements covered all tastes this year too. In their Army Marquee the club provides the usual tea and coffee plus "Jimmy" pies, rolls and sausage, and veggie burgers (egg rolls in the mornings), and they are all free! The Hotel had a special price menu Friday and Saturday, which provided a three course meal for only £8.50 in the restaurant, silver service etc a bit posh for a rally but it made a change from junk food!

The camping is on the lawns and in the garden of the Hotel and is all level and quite sheltered.

There was a range of bikes at the rally from rats to a Ducati 999R, a few outfits and trikes. 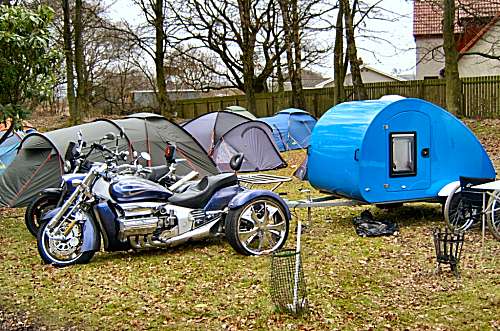 The most complete set up was a Honda Rune trike with a teardrop caravan in tow!

There was a three cylinder turbo diesel powered custom bike there too, which looked to be well used.