Axel Bodeit and I wanted to take part in the January 1993 rally. My BMW K100RS had a season license plate from April to October, so I couldn't ride this motorcycle.

At the time I had still registered a Yamaha XT250, that my wife rode in the summer. That was then modified a little for winter. I installed a small windshield, a one-man seat from a BMW, handlebar muffs, and a wooden plate on the small tank so that I could attach a 35 litre Harro tank bag. Another camshaft was also installed, to increase the power from 17 to 22 hp.

The invitation to the rally actually went from Friday 1st to Sunday 3rd January. But when you celebrate the New Year with your motorcycle friends, it's hard to ride a motorcycle on the morning of January 1st. So, on Saturday, January 2nd, we set off early in the morning towards England. Axel Bodeit (Moto Guzzi T3) and Hans Mondorf (Yamaha XT250).

Axel drove up front and had all the luggage, including the camping utensils, lashed on his Moto Guzzi. I rode the Yamaha just behind him in his slipstream. On a straight line we managed around 100Km/h, if there were no mountains (hills) in sight.

At the time, I weighed around 120 kg without motorcycle clothes. The Yamaha's small engine had a lot to do, carrying that weight.

We reached the ferry without any problems and crossed over to Dover.

In England on the motorway the same procedure; Axel drove up front with me behind. When we got to the pub "The Gaydon Inn", it was already dark.

In the dull light of the Yamaha and Moto Guzzi headlights we set up our tent. Then to the pub as quickly as possible to the open fireplace to warm up. We had a lovely Saturday evening there, spent with many familiar faces and some pints of beer. 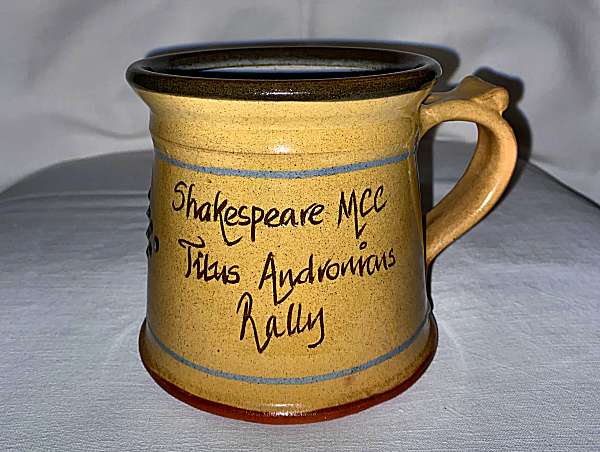 We received a tankard from the Chairman for the longest journey from the continent.

As frost protection for the night, just before the bell, we ordered "The last order now", another whiskey.

On Sunday morning we weren't in as much of a hurry as the years previously, and enjoyed a delicious full English breakfast in the pub.

We had planned to go as far as Hythe where we would have another night's stay at a B&B. Then on Monday morning back to the ferry, mainland and homeward. The return journey was also carried out without any problems.

This programme was sent by Ted Trett and it contains a puzzle square by Heather MacGregor on page 3. The bones that you are gnawing on are listed on page 4.

The puzzle is now interactive. You can undo wrong guesses which is a lot easier than trying to rub them off a beer soaked paper version.