When the Star Rider Training Scheme began in the late 1970s many RAC/ACU instructors were suspicious of the motives of a trade sponsored training programme especially as it undercut on price and provided training in six weeks versus the RAC/ACU standard of twelve weeks.

The system was first rolled out under the Two Wheel Training Scheme alongside the schools programme. It was organised in Leicestershire by Peter Oakley, one time owner of Motor Cycle Accessories (and more recently famous for his YouTube video blog as Geriactric127). The scheme quickly changed its TWiTS label!

County Hall, which organised and supported training in Leicestershire, welcomed Star Rider into schools and opened Saturday morning training alongside the weekday evening RAC/ACU training. Several RAC/ACU instructors decided to join both camps so that they could take advantage of Star Rider instructor training and see how the 'opposition' worked. Unfortunately the RAC/ACU instructors were counted as 'experienced' and put straight to work.

The Star Rider system was very different to the RAC/ACU training programme. Their system was to operate exactly to a Manual for every part of the training while the RAC/ACU system depended much more on the perception of the trainee's ability and needs as determined by an experienced instructor. Star Rider also insisted that all instructors should be trained before they became operational. 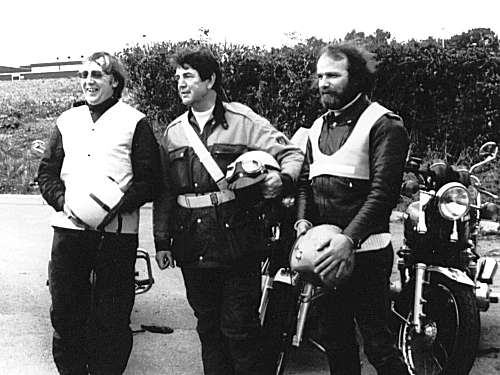 One of the first Star Rider officers to provide training within Leicestershire was Bob Chambers. His practical approach and impish sense of humour quickly made him many loyal friends. He was often assisted by Arthur Robinson from Notts, an earthy Norton rider who provided the slick Star Rider organisation with street cred.

In a very short time and with the excellent support of John Wilmot at County Hall, Star Rider became a very effective training scheme within the county and its methods were a catalyst with benefits for the traditional RAC/ACU schemes. But it was not just the methods that cross-pollinated. The dual allegiance of many instructors and the even-handed support of John Wilmot eventually lead to joint training programmes and the combination of instructors for the Leicester Phoenix Road Safety Rallies that used Star Rider instructors as marshals.

The training began with Bronze Star consisting of one morning's introduction to the very basic controls of the motorcycle. The bike was delivered to the training site by the dealer. By the end of the morning the trainee was expected to be able to ride his (or her) new motorcycle home.

To introduce a new rider to the co-ordination of throttle and clutch the instructor would straddle the front wheel and cover the clutch and front brake lever with his hands. Some trainees were concerned that they might run the instructor over. We told them "Instructors are insured. If you kill one we'll provide you with another." It was possible (and frequent) for a trainee in full flight, desperately twisting the throttle the wrong way, to be stopped under control by a quick instructor taking the headlamp in the solar plexus and the handlebar levers in the crook of each arm.

Peter Clay, the senior county road safety officer was delighted by a report that showed nearly all trainees were completely satisfied with their training. But this was disastrous. Bronze Star was the equivalent of teaching someone to swim in a classroom and then throwing them into a river. This was proved when a trainee left the Cattle Market training on Saturday lunchtime and was promptly killed in the traffic.

Star Rider did not provide insurance for taking Bronze Star trainees onto the road. Therefore, at the end of the training we explained that we could accompany the trainee to a petrol station to help them top up for the first time, then ride with them part of the way home but not as part of the training.

We also promoted the Silver Star training as strongly as possible.

Silver Star was the training that delivered safety. The Bronze Star was just a way to sell motorcycles to non-riders. It provided an opportunity for the instructors to sell the real training.

It was fascinating to come across your website by chance.

Way back in 1979 or 1980, BBC Radio Humberside and the Humberside Police were keen to promote the Star Rider scheme. I collaborated with a lyricist to make a song for a Radio Humberside programme and I found a copy in my files.

I'm a biker myself - or, I should say was! Last year I donated my Bonneville 750 (which I'd bought in 1975) to the National Motorcycle Museum. I decided I was a liability on the roads!

Anyway, what a great scheme Star Rider was - and I'm certain it saved lives.

Great story, was fun to read.

I was trained by star rider in 1984 by Roy Seagrave, Robin Rowell and Alan Simpson if any of them jog your memory.

I liked the "run through the ride like a film and correct in order" way of teaching. I still do that now as I have my own school and get "how do you remember all that?" comments from my pupils.

I still have my star rider instructor manual too.

I was wondering if you may be able to help me. Way back in 1981 I was trained in Witney Oxon by Star Rider. I took the Star Rider Silver badge course, which I passed.

I cannot find my badge or certificate and was wondering if anyone would still hold records from those heady days of motorcycling?

I can even remember the name of my then instructor Mr Mike Hall.

Sara Gniadek-Pitt, of Community Safety at Fire & Rescue in Thames Valley made a search through local contacts without success but who knows what may turn up fortuitously. In the meantime you could take advantage of the latest Be A Better Biker course.

I was a star rider instructor in the very early '80s and still have the Belstaff jacket, bike badge and licence. It is all like new. Do you know if anyone collects this sort of stuff and am I sitting on a fortune or maybe even a few quid? Please let me know.

I worked at Wimbledon training centre, well it was the car park at Wimbledon dog track really. I think the area instructor was John Hull or Hurst. He was a traffic police sgt and stopped me for speeding and talked me in to it.

I was the last guy running Birmingham Star Rider when they sold out to CSM; I went across with the stock.

I think I was the youngest instructor in the country as I started at 18 in 1989.

Great fun, exciting times and am still teaching, but now it's my own.

Would love to know where some of the guys are now. I was Chief Instructor for Portsmouth and Havant schemes and ran Bronze, Silver and Gold and the instructors locally.

I also ran at the same time the RAC/ACU for Havant. A real shame was that just yesterday Graham Kershaw, the regional manager, had his funeral and a real loss.

I may challenge the chap above as I started as an instructor at age 17. Now at age 56 I still ride (11 machines), am still a member of the IAM (passed at age 18) and we run moto cross race teams.

In my region were, myself (Derek Baker), Derek Desusa, Colin Palmer and several other chief instructors.

My mates dad, who happened to be a Star Rider Instructor, gave me free Silver training to get me through my test.

I returned mid 80s as an Instructor. Lead to me running a full time Super Cross track in Weston super Mare for Star Rider as well.

I too still have my certificate, my card and my orange standard training manual with the slightly newer paper showing the CBT supplement at the back.

I was the LTO for Lincolnshire in all. During the life of Star Rider I trained some 280 instructors up to all levels, or as far as they wanted to go. I trained service personnel at RAF Swinderby, Scampton and Waddington and was making inroads at Wittering when the close came.

I was an instructor and police motorcycle rider with the Lincolnshire Police. So, during the 70s and early 80s was heavily involved with proper motorcycle training to all levels.

The concept was great but the time involved in carrying out all the requirements was taking a toll on my family. In the end the Police had a reshuffle and I was taken off Traffic for mundane jobs and I suffered very badly with my health as a result.

All the best to anyone that knows and remembers me.

I was the Chief Instructor at the Hinckley and Market Harborough Star Rider Centres in Leicestershire, between 1981 and 1987, and also a Part One Examiner (AMI/AME 2983).

I remember Bob Chambers and John Wilmot well, also Keith Hart who trained the AMIs and AMEs. Robin Deacon was one of my AMIs and he and I did the Gold AMI Instructors' course under Keith Hart, later working together to promote and run Gold courses. Robin then went on to be C.I. at Star Rider Coventry. I started with Star Rider at Leicester Cattle Market but then moved out of Leicester to Broughton Astley and took over the Hinckley site when Don Allen retired.

Keith Hart is now a professional magician, living in Scotland. Another of my AMIs was my ex-wife Fiona Davis (now Fiona White) who took over the Market Harborough site after we separated. She still lives in Market Harborough. Craig Timson and Alan Hambly were both my AMIs (and both ex trainees). I also recall David Padfield and Jon Styles as AMIs at Leicester Cattle Market.

Robin Deacon was one of my AMIs and he and I did the Gold AMI Instructors' course under Keith Hart, later working together to promote and run Gold courses. Robin then went on to be C.I. at Star Rider Coventry. I started with Star Rider at Leicester Cattle Market but then moved out of Leicester to Broughton Astley and took over the Hinckley site when Don Allen retired.

As I recall Oriana Tennant took over when Bob Chambers retired. I think Oriana is still around.

I still have all my training records in computerised format on an ancient Oric Atmos and would be pleased to hear from any of my Instructor team members or former trainees.

I was an instructor in Reading in the late 70s early 80s and also took the advanced gold star training and passed.

All my bits have now been lost - is it too much to hope that Star Rider still has my details/records?

'Fraid so, Gordon. We'll vouch for you though.

And as if by magic I have found my licence (now slightly out of date) and my gold star pass certificate too - signed illegibly by AMI examiner 335!

Great info and history. Pity we cant return to those halcyon days.