Final control for the National Rally in 2008 and 2009, Bletchley Park opened to riders from 7.30 until 10am. Those who could keep awake could then take a tour of the war-time code breaking facilities.

Big bikes, small bikes, British and foreign, all the colours. They all have one thing in common ...

Young and old, boys and girls can all enjoy the achievement of completing the National Rally, with an award and a nice cuppa at the end.

It might be inappropriate to say the dedicated staff operated like a well-oiled machine. There was little mechanical about them and the "oil" came out of a teapot.

After creaking through the Kegworth Control these Fosse Riders completed the rally eager and refreshed.

A few teams enter the National Rally and I am surprised that the BMF clubs don't field more riders. They can't all be operating Controls.

Let's hope that MCN don't get hold of these photos or there will be another "Shock Horror, Bikers Ride All Night" headline. 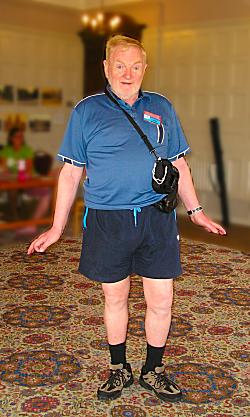 In the mid 1980s Wally Bradshaw tried to convinced the Training Scheme Instructors that he really was the Good Fairy. At Bletchley he decided to reveal his inner desire to be a Girl Guide.

Wally will recover in time to organise the next National Rally.