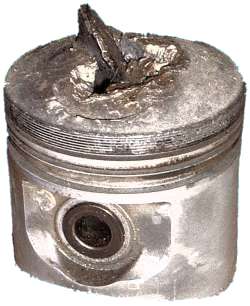 Back in the good ol' days calling out the AA was for wimps. We even had tyre changing competitions on club nights just for fun. Try that with a tubeless radial on a alloy rim!

As for roadside rebuilds, read it here.

Ben Crossley tells about the only time his 1952 AJS 18s ever stopped.

Coming back over Shap from the Trossachs Rally the AJS broke the top off of its wire-wound piston. The piston is big and made from alloy. To stop it seizing when hot the original manufacturer's piston was tightly wound with piano wire to constrict the expansion. Once the top broke off the piston it looked like a busted mattress when the head was removed. 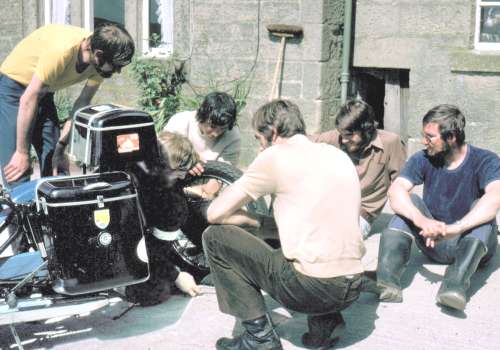 After practicing tyre changing on club nights, the odd puncture on a club run would be quickly fixed. We didn't count punctures as breakdowns, just delays. Unless they occurred outside a pub in which case they were counted as an opportunity.

Tony Bradley, Richard Hood and Ben Crossley were three LPMCC members in a group heading across Poland for the last hundred miles to the Lublin 1975 FIM Rally. The group was held up at a level crossing while a steam train pulled a long line of goods wagons across. The riders used the break to stretch their legs and photograph some of the other vehicles, including a cart pulled by an ox. Suddenly the barrier opened and everyone rushed to remount and set off again. As they roared off one rider pulled his goggles into place while avoiding the ox-cart and his engine died. They waited for him to turn on his fuel but that was not the problem.

Reserve was checked and OK. Plugs were removed and tested. No spark. Fuses were replaced. Nothing. Points cover removed and contact gap checked. No power at the points. Battery OK.

"You will never understand the wiring diagram, it's a mare's nest."

"Trust me, I'm an electrical engineer."

The handbook was produced and oily fingers traced the route of the wire from the battery .. through the fuse .. through the ignition switch .. to another switch?

"Oh my gawd - the damn thing is turned off at the kill switch." The rider had flicked it accidentally when struggling with his goggles. 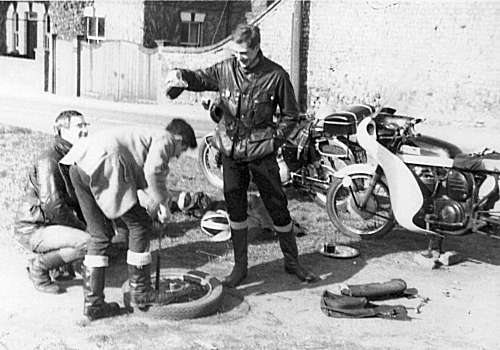 Megaphone recounts the typical life of club members in a piece from 1968. Read it and weep. 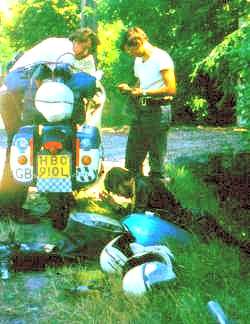 Somewhere in France a Norton Commando blows the head gasket. Mick Ayriss passes the tools and a new gasket to Ben Crossley while Dave Scrivens tries to find some shade.

It was so hot that we had to cover the spanners with a damp cloth or they became too hot to pick up!

Les Hobbs was determined to take the Long Distance Award for the 1972 Stag Rally. This is what he had to go through.

Les deserved his award as told on the Stag Rally pages.

Dedicated to everyone who has had to reassemble a motorcycle at the side of the road. Get your spanners on this one. Click in the middle of a part to pick it up and click again to drop it. The sooner you finish, the quicker we get to the pub.

I did recognise and eventually 'mend' the Silk but I'm glad it was not on a wet and windy night!