Getting stopped by the police on a club run was something we dreaded because we feared bad publicity for the club. In reality it would have probably attracted a lot of new members, but we never found out the hard way.

Some occasions when we were stopped are recounted here.

A good turn out of bikes for the B.M.F. Woburn Rally resulted in the group being broken before we were clear of Leicester. The tail end half of the run caught sight of the lead group in Wigston but watched as the leaders got a green light at temporary traffic signals at road works on Bull Head Street. By the time the second half reached the lights they were red. We watched the first group disappearing south on the old A50. Behind us a police motorcyclist joined the queue. The signal turned to green and the rest set off to catch up the first half of the run.

The first half had pulled up near Kilby Bridge to wait and the second group joined up behind. The police rider pulled in between the two groups, dismounted and signalled the first group to continue. He pulled his book out and went down the line of bikes filling his pages. Some of the things he picked up:

Q "Where is your front number plate?"
A (Dave Scrivens) "I was putting a fairing on the bike but changed my mind and forgot to put the plate back on."

He didn't even mention speeding. 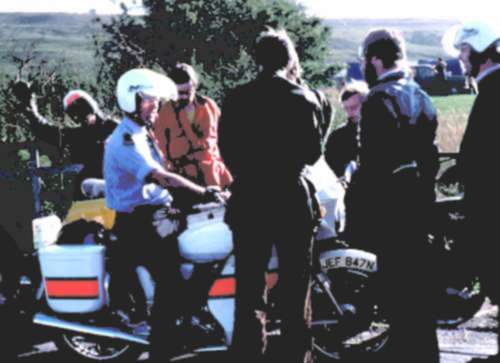 After an annual club dance with Fearn's Brass Foundry at the Il Rhondo on Silver Street Dirty Eddie walked back to where his Scott was parked. A young bobby had been waiting his return and went through the script.

Q "Is this your motorcycle sir?"
A "No, I'm nicking it."
Q "Are you aware that this is a Scott motorcycle and the excise licence is for a Matchless?"
A "Yes, I am."
Q "I am obliged to tell you that anything you say ... etc.... May I see your driving licence and insurance?"
A "I might as well tell you, the bike is not insured either."

At this the young bobby became quite apologetic, probably at the prospect of all the paperwork it would involve.

YB "I watched you crossing the Tower earlier this evening and the bike was smoking a lot."
DE "It's a two stroke. They do smoke."

On a club run to see the SS Great Britain Rob Dent got lost in Bristol and the column of bikes going round in circles picked up a patrol car. Rob Dent had a licence full of points and was about to kiss it goodbye when they were eventually flagged down.

Q "Do you lads belong to a club?"
A "Yes we do officer."
Q "Thought so. Your riding is so good I thought I'd compliment you on it."

Rob Dent had to empty the adreniline out of his boots.

Benny Caravelli was so gung-ho keen on his big blue Bonnie that he had to be made Runs Captain. Leading off from Lee Circle to Mallory Park he must have thought he was entering a race. Only Stan Naden on his BSA outfit tried to keep up.

Ten minutes later the rest of the run passed the pair of them in deep conversation with a member of the local constabulary.

Benny caught up just as the run entered Mallory Park and with a big grin rode to the front, stopped and put his foot down a hole in the grass. He slid off the Bonnie and lay on the ground holding the bike from falling on him with his leg. Everyone continued to ignore him.

After a typical committee meeting at Cosby the lads made a dash for the pub at Dunton Bassett before last orders. A patrol car joined the chase through Broughton Astley and flagged down the riders one at a time. They didn't catch Terry Reynolds but went back for the rest who had congregated at the pub.

Q "Are you together?"
A (Chorus) "No officer, never seen them before in my life"

Note. This was the stock answer for two reasons.

1) Not to bring the club into disrepute (Rule 16)
2) To avoid a charge of racing on the highway.

On the way back from the Elephant Rally Rob Winnett failed to make a turn on the autobahn. It took several minutes for Ben Crossley to get his attention from the sidecar.

"You are going the wrong way!" Ben shouted.
"This is the way we came." Rob protested.
"We aren't coming now, we're going home." Ben pointed out.

Rob decided it might be too far to continue to the next exit. He turned the combination round on the autobahn and, to attract less attention, he turned off the lights. After a minute or two riding the wrong way down the hard shoulder, watching the traffic swerving in alarm, one of the oncoming cars pulled in front with its blue light on. The policeman came over.

After 5 metres he pulled up and walked back to the combo.

Q "Does this motorcycle have lights? I suggest you put them on."

Many of you will recall Mike Risley who worked with Dave Scrivens at the Gas Board. Mike rode a DB5 Gold Star and when he and his family moved to Madrid the Goldie went with them where it was an even rarer sight. Unfortunately some light fingered villain took a liking to the bike and made off with it leaving Mike to car share to work every day.

One morning in the middle of the Madrid traffic, what should pull alongside but Mike's unmistakable DB5. Mike leapt from the car and tackled the rider. They decided to put the rider in the car and ride the bike to the nearest police station.

"Just a minute!" said the car driver "How do I control the car and this hombre?"

They had nothing to tie him with so Mike knocked the guy unconscious! Sorted.

It later transpired that the guy had bought the bike in good faith! (Sure, paid cash in a local bar from a total stranger etc but you know how the law works)

Then there was the time we were busted in Hungary on the Romanian FIM Rally.

David Gerrard received advice from traffic cops as told in his Profile.

Gordon Roberts was left with a bitter taste from the 1965 Dragon Rally.

Phil the Spill recalls an incident on the way to the 1980 BMF Rally.

The only time Ted got busted in the Isle of Man was on his his Suzuki SP370. Here is Ted's bit from that report.

No mention of what happened to the MZ.

Then there was that time at the Elefantentreffen. Ted got away lightly.

No cigar for a near miss.

Ted Trett eventually coaxed the better side of bobbys after his K100RS was written off. After failing to get a lift home in the fire engine, Ted got into the police car that had just arrived...

Ted was home in time for tea and buns, with any luck.

I'm a biker myself, Brits and Japs. I can appreciate the sense of humour.

Good site lads. I also liked the first vid on yer vid page with the 4 outfits going to the Elephant Rally.
Any more like that?

See the Review page for the LPMCCnet video list.
The Elephant video is from storm07.