Down in reception the only bikes we could see were not Harleys and Colin was a little concerned, were these our bikes?

Roger, our tour guide and his wife Christine turned up, right on time, with their bright yellow BMW 1150GS. They immediately gave us the run down on our impending trip but, first we had to complete all the bike hire papers, just in case we rode off into the sunset with them. Roger gave us his apologies, for the missing Saturday night meeting, as he had been out riding the first part of the route, to ensure the road was clear through the snow covered Cascade Mountains. 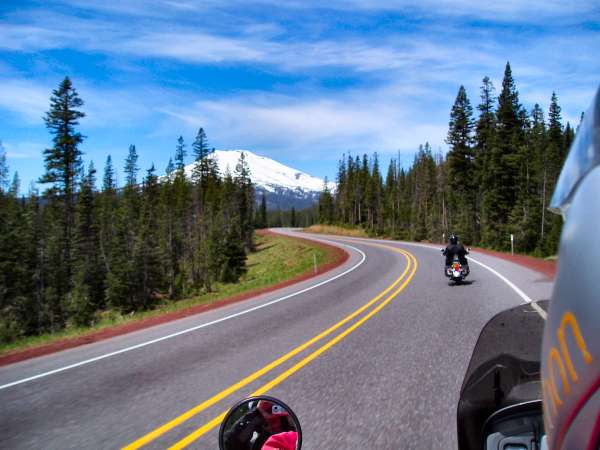 Scott, the owner of Flyride, arrived fifteen minutes later and made the paperwork easy, with just a few signatures here and there, so we were signed in and ready to go, but not on Harley's!

The bikes outside were indeed ours, but only one of us could take the brand new Road King, which Scott had brought up for us. The Harley had no touring equipment, except the standard panniers, so both myself and Colin decided, after consultation with our partners, to take the Japanese bikes first offered, which came complete with panniers and inner bags, top box, pump, puncture repair pack and tank bag, in reality, just what we needed, if not what we wanted. So which bike do I take? The Kawasaki GTR 1000 or the Honda Pan European? Colin and Irene's flights had also been colourful, with much running backwards and forwards at the airport, and Colin's leg was causing concern, by not bending as much as he would have liked. The Pan fitted him best and the only thing left to do was to ride them. 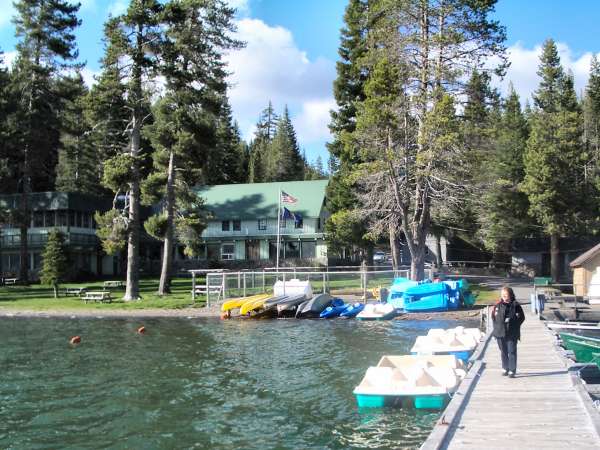 First stop was the gas station, on the edge of town, for petrol, which was fine, but my key would not open the tank. Scott, who was paying for this first tank of fuel, knew immediately what the problem was and whizzed off home to fetch the other key and twenty minutes later arrived, on his bike, with the correct one. Sorted.

Road positions were soon adopted, with Colin following Roger, and myself at the tail end, a formula which suited us until the holiday was over.

Our first sighting of the Cascades and Mount Bachelor had been from Bend, or the aeroplane, but now we followed a wide sweeping highway towards the snow capped peaks. It was looking good with chocolate box pictures everywhere. Getting used to the bike was very simple, as the Kawasaki has few vices and a new set of Dunlop Sport Max tyres gave it a confidant feel. I like to follow routes and have to confess to a bit of a fetish for maps, but today I just followed the leader, soaking up the pleasure of the ride, and letting the stress of the long flights and lost luggage go. When we pulled into our Lunch stop I really did not know were I was, except to say it was part of an old army training camp that was now an out of town holiday shopping and food area. Looking around us we could see the camp layout, with its central square and wooden buildings around the outer edges. They say over 100,000 engineers were trained here during World War Two and I had to think? Did we see their work on our Normandy tour in 2004? If I only learned one thing, during that trip, it was combat engineers were right at the front liberating beaches and building roads, inland, and maybe it was here, in Oregon, that they learned their trade, so vital to our freedom today.

We found a Subway open, to feed our hunger and quench our thirst, before a little window shopping in the many retail outlets, dotted around. Back at the car park Colin showed us his new black leather cowboy hat, apparently he couldn't resist it at the price! How to get it home, now that was a different story, but he did. 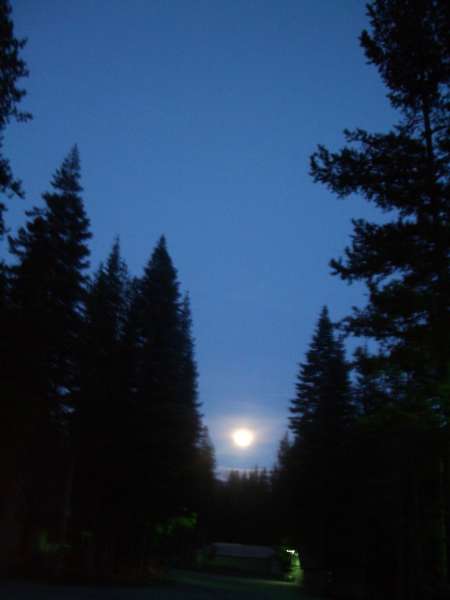 The day had been brilliant sunshine with blue skies, but the day faded, quite quickly, after our meal of steak salad, in the Lodge Restaurant, and it was getting quite cold on our walk around the lake looking for birds. Barn swallows seemed to be everywhere around the hotel but there were now a few osprey over the lake.

The Lodge wooden buildings were showing their age a little but it had a great atmosphere, I liked it.