Breakfast in this hotel was American style with coffee, pastries, donuts and fruit, and it gave us a chance to mull over how noisy the upper rooms had been, during the night. It sounded like a group of morris dancers practicing until the early hours. Roger spotted the culprits. Did he shout Eureka to the two ra ra girls leaving with big grins on their faces? No he was speechless, as they sped off into the early morning mist. Respectable hotel? Well almost! 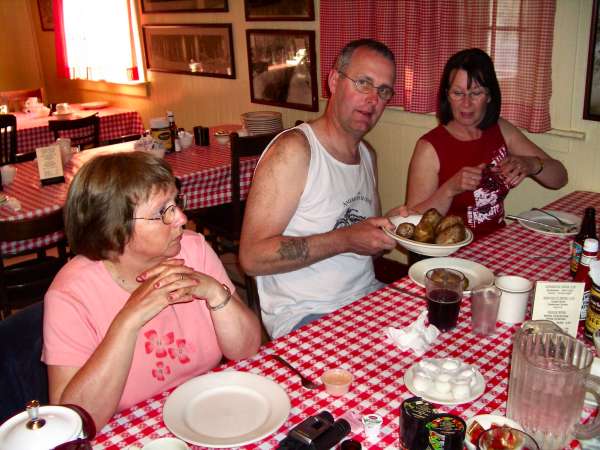 Its was 9am Thursday and the next stop was Fort Bragg, via the Avenue of Giants and the Drive through Tree.

This was the second day of big trees and they are big. In the logging days they cut down trees with a diameter of 28feet and still standing today is the "Immortal Tree" at 14feet in diameter, but the "Chandelier Tree" is big enough to drive a truck through. How tall? Who knows? I couldn't see the top without falling over, but it was worth $3.00 to see it and get those must have holiday photo's. 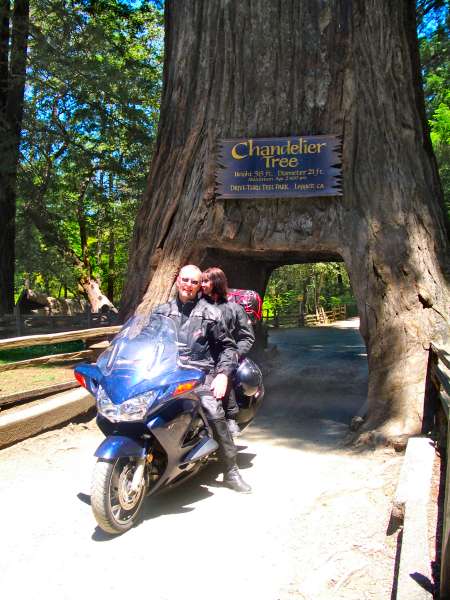 The day was getting hotter, and as Colin had the Honda Pan, with all the whistles and bells, he knew it reached 104°f whilst we only felt it was blooming hot, which gave us our first chance of the holiday to dispense with over trousers. 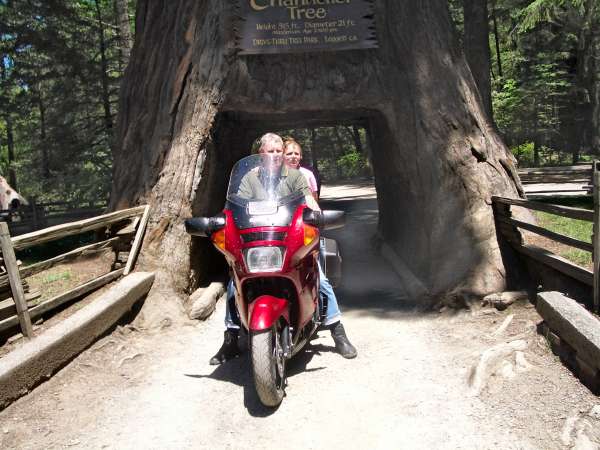 We detoured off the main road to a light house, at Arena Point, but arrived a little too early and they were still closed, no matter, the stop was welcomed and the view was quite good if not a little breezy.

The roads became much better, as the day went on, with Roger setting the right speed, fast enough for fun, but not heart stopping, and as we passed through the woods we got the smells of timber and then ozone from the sea. I really enjoyed the last 22 miles of twisty roads to the misty cool coast road and as we came close to the Fort Bragg Hotel the temperature dropped from 92°f to 57°f in just half an hour.

Still travelling South the coast was over on our right and so was an old wooden bridge, in an unusual style, which crossed a River Inlet; possibly it was an old haul road. The more I looked the more I became engrossed in it and completely missing the hotel entrance, which was opposite. A quick U-turn was needed to The Best Western Vista Manor Lodge. We had logged 672 miles to here and used 3.26 gallons ($9.12) of fuel, over the 138 miles between fill ups, an average of 42 mpg.

Registration at reception took a few minutes but, like every stop, Rogers' efficient pre-booking made things run smoothly and usually he got us a ground floor room, which helps when carrying all the luggage from the bike, but today it was a first floor room, directly above where we parked our machines. Through our rooms' large picture window we had a great view, of the wooden bridge and its lagoon below. From this comfortable setting we watched a belted kingfisher catch and eat its supper, whilst the American gold finch hopped across telephone wires just 3 feet below the window, and let's not forget the merganser or the ever present osprey. Oh, my points are building up, this was better than a weeks bespoke bird watching on the Isles of Scilly, during the migration period, and it hadn't rained!

The BMW boys passed by our window, also going South, around 5.30pm, perhaps heading for their hotel, they looked focused and didn't look over to the old wooden bridge, maybe they had seen it before?

Fort Bragg town was just a short walk from here and it had a thriving small brewery with a restaurant opposite, so that's where we went. food and beer sounded an ideal way to spend an evening. Fish and chips for Helen, prime steak and mushroom bread pudding for me, was an interesting combination, but the Red Seal Beer was excellent and was only one of a much larger choice on offer, however, I wanted a clear head tomorrow as it was San Francisco.

Not enough of it, more please. Sounds very interesting.