The cool 54°f of Friday morning made me wonder if I had done the right thing, to abandon my over trousers, but the temperature soon started to rise and the road reminded me of the Ayrshire coast in the West of Scotland. One of the memorable named places we passed through was Manchester, with a population of 462, a few short of its counterpart in the UK? The car and RV drivers were being really good, pulling into 'Turn Outs' for us, which made for safer and easier overtakes, on this twisty road, some of the hairpins seemed to do a full 360° but poor sections of road surface showed up the Kawasaki 1980s suspension, although, it added to the day by making it a little more 'interesting' so to speak.

Lunch was in a Fort Ross petrol station, on Highway 1, with a deli attached, the fuel pumps must have been the oldest we had come across. Had they just been converted from £.s.d? 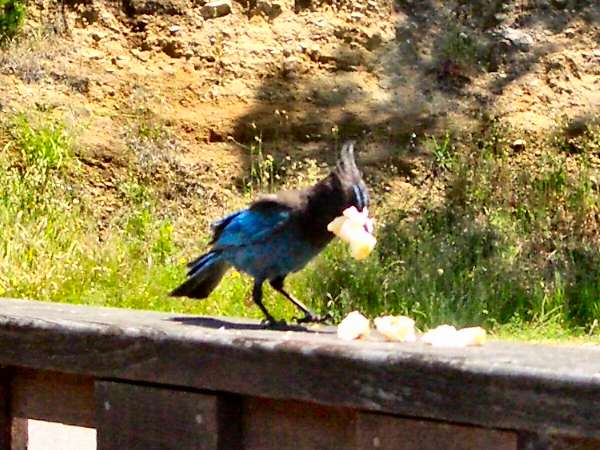 Sandwich and crisps for $4.50 and coffee for $1.25 was good value, and seating on the outside patio solved the problem of where to put our jackets without people falling over them, when Stella's jays joined us for lunch. Several of these bright blue and black birds with punk hair do's kept us busy throwing bread, tempting them away from their normal lunch on the red hot pokers growing nearby.

Just one more stop was needed before the Golden Gate Bridge came into view and it turned out to be a prominent and interesting building called 'The Record', which was once the town newspaper. The front half was a Store selling 90% organic produce and at the rear, our coffee shop sold 95% home-made and organic products. I do have a few problems with all this organic business as I can never tell any difference between organic and non-organic, but the chocolate rice crispy cake tasted good, so perhaps that answers my doubts? Will it be successful? I hope so as they were so enthusiast. 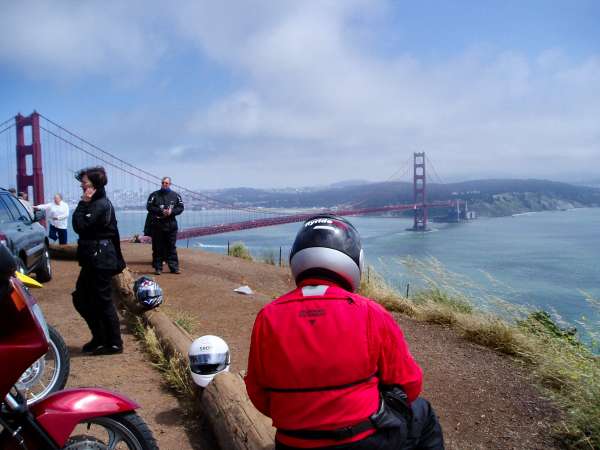 The Golden Gate Bridge, which opened in 1937, came into view and we stopped at the Vista point for more of those must have photo's. Colin suggested we go down to the visitors centre and learn all about the area, which sounded ok to me and the others, so after soaking up the view for a 1/2 hr or so, and then waiting for the Chinese family to take photo's of everyone in their party, from every possible angle, we finally got ours in the 'can' and went to check out the visitors centre.

Roger had satellite navigation on his bike and he tells me it comes into its own in cities. Well we arrived at our Holiday Inn Hotel on Eighth Street without any U turns, so it must have worked. I didn't get off the bike, whilst Roger booked us into the hotel, and I didn't want to do another 100 miles today, I was just glad to be here.

We had a two night stop over here and a visit was planned to Alcatraz on Saturday. My BMW GS 650 riding cousin Suzanne was also due to catch up with us and spend the weekend showing us the sights of her City. 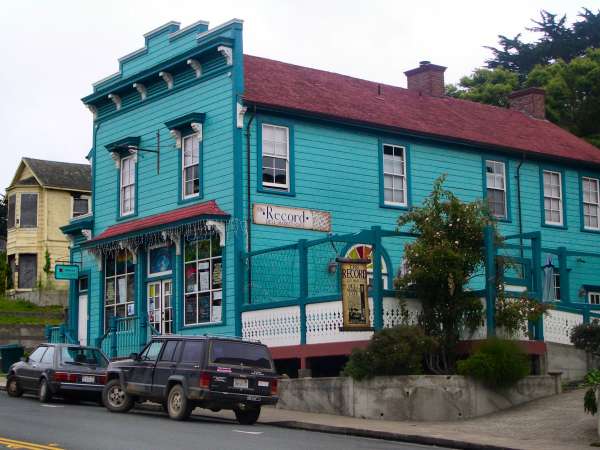 Booking-in was just as easy for us and so was parking in the hotel car park, but getting into our room was a different story as the key would just not work!

Getting into our room required three visits to reception, when finally they suggested the door handle may work upside down, that is, turn the handle up to open, and I have to say this cunning security measure worked on me for nearly half an hour.

The phone rang and cousin Suzanne was checking we had arrived, within another half hour she was knocking at the door with a smile on her face. "I have just spoken to an English lady in reception who knew who I was", how? Was it the c characteristic Ayriss good looks? A burden incidentally the whole family all have to carry!! or was it the crash helmet she carried that gave Chris Yetton the clue?

On Saturday we had our own special guide showing us her 'home town' sights to include Alcatraz, if we could get tickets? But before that we had an evening meal together, giving us plenty of time to catch up at the "Moonlight" Chinese buffet restaurant which was just across the road. Strawberries dipped in the chocolate fountain were just one of the delights that tempted us to eat more than we really needed!