Sunday and the run to Oakhurst via Columbia was on, and an extra rider was coming along for the day. Leaving the restaurant after breakfast Helen chatted to a group of Harley riders, from Austria, doing a similar tour to us.

Suzanne arrived on time with her yellow BMW and Rogers' sat. nav. took us on an unusual route out of town. The road surface we encountered, leaving the City, gave me cause for concern at times. The grooves set up a little shimmy on my bike and I was really pleased the road was dry.

Following taking on fuel (145 miles $7.66 2.87g) we stopped a few miles further on at a Subway for lunch, mainly because nothing else seemed to be open. They say you learn something every day and today we learnt about the $2.99 daily specials that Subway offered, it saved quite a lot of money for the both of us and, hey, I like a bargain.

The roads were quite uninspiring until the San Pedro Reservoir Vista Point, when things got a little more exiting. No, not the roads, although they were getting a little bit better, but the numerous gun shots, ringing in our ears. Was it feuding families or just someone playing cowboys? 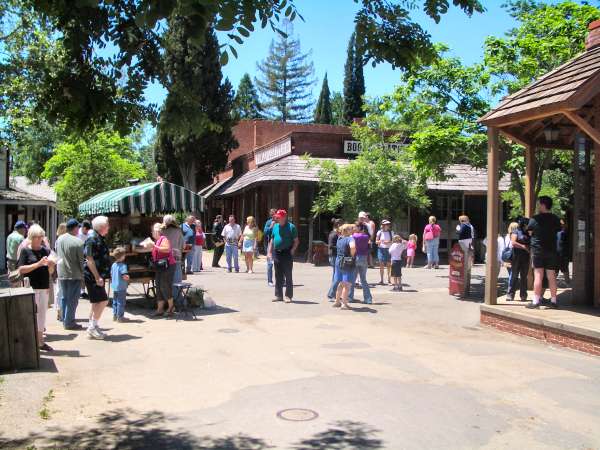 Sonora was next and the chance of a beer, in a real town bar, and guess who the drunk attached himself to, me! He seemed quite nice, at the bar, with his well worn cowboy hat an' all and, to be fair, he was. It was only when he came over to speak with me again I noticed, standing seemed to be a problem, and I thought Budweiser was just a bland fizzy drink?

Columbia was an old mining town from the 1850's, with a population of Four to Five Thousand who managed to extract some $87,000,000 worth of gold from 'them there hills' in just eight years before it ran out. The town didn't die and become a ghost town, like a lot of others however, as it became a National Park in 1958, so we visitor's could see 'how it was'.

Suzanne had introduced us to geocaching, a new name for a treasure hunt, available from the Internet, so armed with our clues we set off to find answers to a list of the geocache questions. Columbia's history was soon being revealed to us as we found answers to each of the questions, in turn, and perhaps one of the more interesting ones was found in the Wells Fargo Office. On show, in the museum, was a set of scales, which had weighed, in their time, over 1.4 million troy ounces of gold and were so accurate they could weigh the signature on a piece of paper! Hard to imagine today how important this little town was and I wonder how many fortunes were made or lost?

Food was on our mind, once again, having spotted an ice cream parlour, as we entered town. I blame the size of my chocolate fudge sundae or the exchange rate and the confusion over values and, of course, everything is so much bigger in the USA, honest!!

Whilst we were having all this fun Irene was battling with a terrible cold, which I am sure was spoiling her much deserved holiday, and was only made slightly better by cold cures every four hours, and I thought Helen was the only one to get ill on holiday, although up to now there was no mossy bites, no tooth ache and I hadn't poisoned her with a leaking exhaust system.

Time to move on meant time for Suzanne to leave us, also, and return home. Such a shame, because the roads on leaving Columbia got so much better for biking with bends in them again, and I spotted Roger got lost! We came round in a big circle somewhere near Angel Camp or was it China Camp? However no-one complained and Helen even thanked Roger as she had spotted several raptors, making the extra half an hour in the saddle worth while for her, at least and for me, it was just more enjoyable miles. 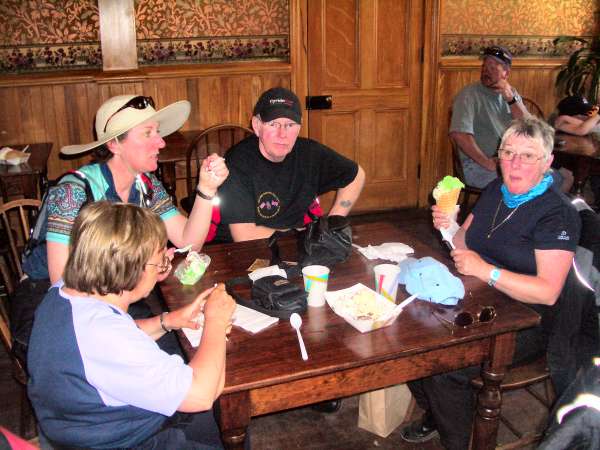 Heading for Oakhurst, our night stop for today, took us through the very small town of Mariposa with its multitude of churches. There must have been a Church for each inhabitant!

The roads from here became so much better as we rose into the hills, with only a white line to stop you going over. It was a shame that Suzanne only rode the highways to Columbia, as the traffic had all but disappeared, but what we did see pulled over for us.

Room 103 was just perfect so we parked right outside the door, next to pool and reception, ideal for bikes.

Wonder of wonders I made contact with the outside world, was it the children making sure we were ok, had I won the lottery? No! Just a voice message telling me of a breakdown in our woodwork shop at work! 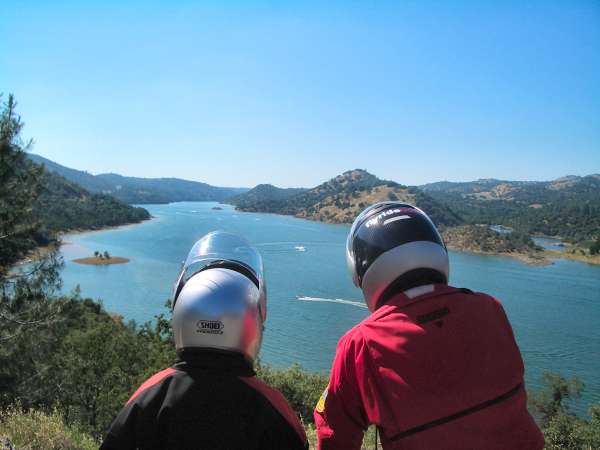 The evening meal was at the Sandino's Velvet Rose Restaurant, it was almost in the hotel car park, so it was quite handy for us, with very nice food but with a name like, Sandino's, my expectations were of exotic culinary delights, maybe liver and onions and indeed fish and chips, are in this part of the world?

This was our ninth hotel room, of the holiday, each with a different layout, of course, and each being clean, warm, and safe. I went to the toilet, in the early hours, as you do, half of sleep, of course, trying not to wake up, when I spotted an intruder coming out of my toilet. I was awake now for sure only to realise it was my reflection in the full length mirror. Funny how your brain works things out? I wondered why such a good look looking bloke like that would want to break into my toilet!

Monday 30th May - Oakhurst to Bridgeport