TALES FROM THE YEARS SPENT POLISHING

I first read about it in 'Motorcycling' and looked at the black and white pictures of lines of muffled up motorcyclists moving through snowy country lanes. Dragon Rally was in its third year and the numbers were expected to be even higher this year. I quite fancied going, it would be a bit different to winter in North London and represented a bit of a challenge. Out of all our group only Bill was up for it so I sent for two tickets.

In those days our bikes were not just for pleasure they were our means of transport and were used on a daily basis in all weathers. The danger aspect of icy weather did not occur to us. I had a second hand Barbour jacket for Winter use, it was totally waterproof and with layers of clothing underneath would, I thought be fine for the trip. Bill used his old USAF sheepskin flying jacket all the year round so didn't see why he should wear anything different. Our friends were not convinced that it was a worthwhile jaunt. They talked about the cold weather that they always had 'up North' although most of us had never been any further north than the Silverstone airfield/racetrack! With all these misgivings, Bill and I went to the 'Army and Navy stores' and both invested in a pair of one-piece under garments!

The morning arrived. We took very little equipment, a sleeping bag and a few spare clothes in case we got wet and some food for the journey. We tied our sleeping bags onto our tanks to lean forwards on like a big racing tank. Bill was the navigator and we made our way to the new M1 northbound. The roads were fairly empty in those days, a lot of heavy haulage still went by rail so lorries were less and of course far fewer people had private cars.

As we progressed further towards the Midlands we met more and more motorbikes going to the Dragon Rally in North Wales. The weather was fine sunshine to start with and our spirits were high.

We stopped at a transport cafe for a good fried meal and a hot drink then progressed into the afternoon. By this time there were dozens, perhaps hundreds of bikes and the camaraderie was great. If any bike broke down there were instantly other riders to sort out the problem. We left the M1 and went west along the A5. We went through strange sounding places like 'Brown Hills' and 'Oakengates' it was all very satisfying. When we got into Wales there were place names that we could not even pronounce!

The Rally was in the grounds of a castle in Conway. As we got closer to our destination the road was packed with hundreds of bikes it was like belonging to the biggest gang in the World! 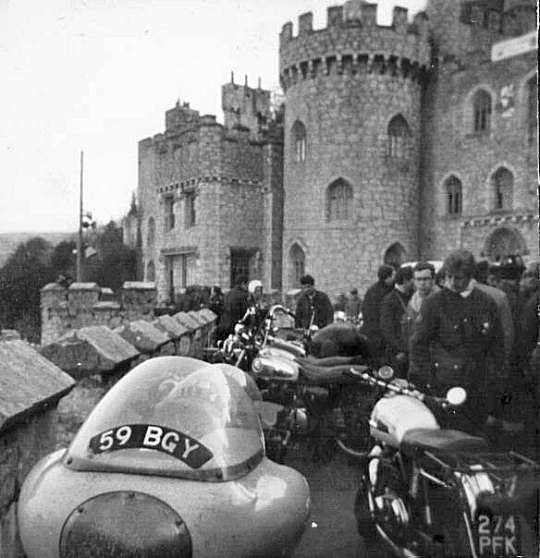 When darkness fell the temperature dropped and we were pleased with our woollen underwear. We lined our bikes up with all the others and went to collect our badges.

There were motorcyclists from all over Britain and some from Europe. There were a lot of German riders with their ubiquitous BMWs. We saw clubs of Vincents and Brough Superiors with red faced bearded riders. In the castle grounds a club of Americans were showing off with their Harley Davidsons . One would ride to a corner of the quadrangle, keel the low heavy bike over until the footrest touched the ground and spin round in its own length to face in the opposite direction then ride back.

Most of the activity seemed to centre round the beer marquee. Bill and I did not really drink alcohol, nor did most of our gang. I think we were too concerned about crashing our prized bikes. We both bought a pint that night but just the one so as not to look out of place.

The night sky was brilliant with stars like I had never seen them. My horizons were broadening, the Busy Bee seemed a million miles away.

Motorcycling was now giving me a glimpse of new horizons instead of just racing up and down the North London scene showing off!

A vast bonfire was lit which roared crackling into the frosty air like a living entity. The spectacle and heat bought all the drinkers out of the marquee to stand round with their beer and whisky to absorb the warmth.

We enjoyed the banter and the shared experience until the fire was a heap of glowing embers with black silhouetted figures encroaching ever nearer. Eventually we headed for a corner of the marquee to huddle into our sleeping bags and fall asleep.

Next morning I woke to the thunder of bike engines as the long distance continental riders departed. I freshened up with dew from the damp grass and went to the fire. Everywhere was shrouded in Welsh mist and where the fire had been was a huge grey ashen circle with smoke curling from the centre. As I surveyed the scene a grey figure rose from the ash where he had fallen asleep the night before probably in a drunken stupor! As he lurched and staggered away I wondered if any had perished in the flames without anyone noticing!