The club has always organised many activities for members. Planning often took place over a few pints at the Club Room. These days the past members still enjoy all kinds of motorcycling events ... and the planning stage!

For a report from John Muschialli on the beginning of the club see Phoenix - From The Egg in the Megaphone Archive.

The pub is opposite the Magazine and was popular until recently for live band music. Can you remember it when Jessops was the little photographic shop next door?

Table top rallies, auctions, slide shows, Don't leave me to write it all! 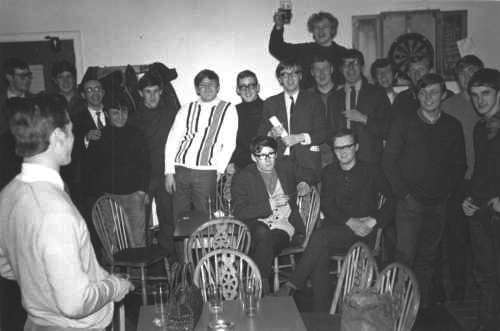 The Rocket club room was on the ground floor at the rear overlooking a small space where we parked our bikes. Some members were then positioned at the windows to make sure the local kids didn't nick anything. 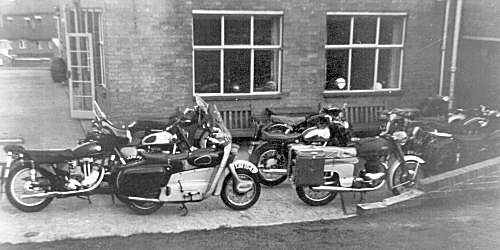 We always paid for the room and raised the money with 'room levy'. This was an opportunity for a committee member to go to every member and pass the details of the next club event. We also made announcements every club night, giving information on club runs, welcoming visitors and new members.

When the cost of the room rent was raised in 1973 the committee made the brave decision to seek somewhere new as reported in Megaphone. For the following few years the club passed between pubs.

I cannot remember why the club moved here for a while. Perhaps they were redecorating the Rocket. We soon moved 'home' to the Rocket again. 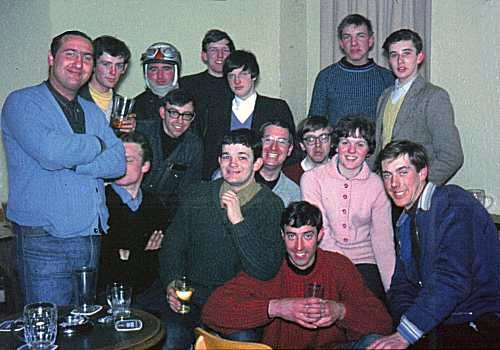 The rubber spider is one episode recalled from The Abbey. Wishbone pulled a rubber spider from his pocket and threw it at Val Loach, who burst into tears. It was the remorse on Wishbone's face that had the rest of us in hysterics and in the end Val was laughing with us. 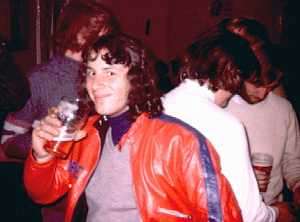 Cat's poo was in heaps behind the furniture in the first floor room we used. Everyone thought the pong was my feet.

We were glad to find somewhere better and move on. The Red Cow has been made into flats ... and it's about the only time I'm pleased to see a pub disappear!

The old pub was pulled down soon after we arrived. I don't think it was our fault.

Another pub that is no longer there! We must have been plague carriers about this time.

Tony Bradley made some discreet enquiries and found out who the landlord of the new pub would be then negotiated for us to return.

We used the upstairs function room. At first we needed to go down to the bar to get our drinks as we were getting the room at reasonable rates and it was not economic to employ bar staff for our room. 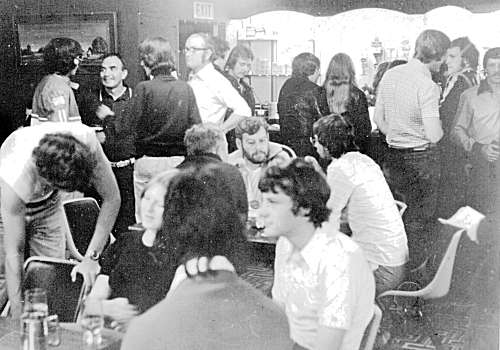 Luckily some of our members had bar staff experience and volunteered to man the pumps. As a result we had the best club room imaginable. The quality of our premises lifted the spirits of the whole club and attracted lots of new members.

This photo was submitted by Tim Wicks. I think it was at the rear of the Cricketers. Let me know if you are on it and whose pocket you are peeking into.

A representitive from Everards Brewery discussed the function room with the landlord and advised that he should be charging the club a lot more. In our defence the landlord said we were a regular event on a Wednesday night and he didn't really want to lose our trade. When he told the brewery rep how much the bar took from us each week he suggested that the room rent should be dropped entirely and the beer sold at lounge prices instead of bar prices! We continued to raise 'room money' but instead of a room levy we used a fund raiser each week. This gave the club a small but nominal income for the day when we would need to pay for room rent again.

Does anyone have stories and pictures?

A new pub and somewhere along a change of evening to Tuesdays. Meeting were in the bar of the Heathcote Arms, or on a summer evening outside high on the hill overlooking the village. 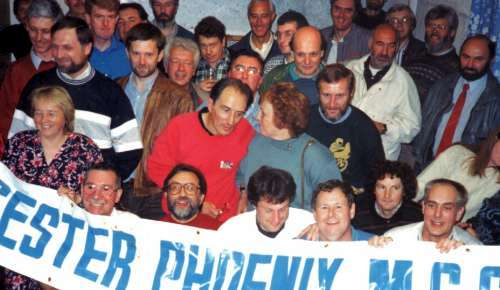 When the word went round that there was a small reunion at the Heathcote Arms we found out that past members do not understand the word 'small'.

The Leicester Phoenix Motorcycle Club now meets every Tuesday at the Elephant and Castle in Thurlaston. Call in for a pint and a chat.