The marshals are beginning to get the hang of this. Sit and eat snacks and dribble down your hi-viz vest about the good ol' days. 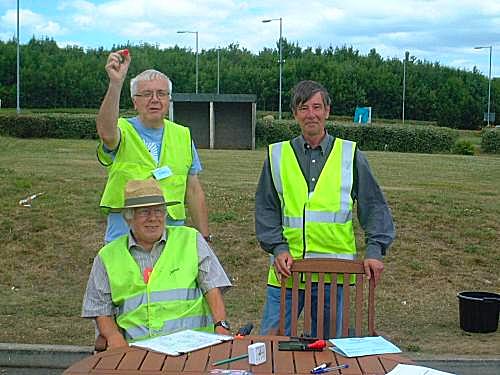 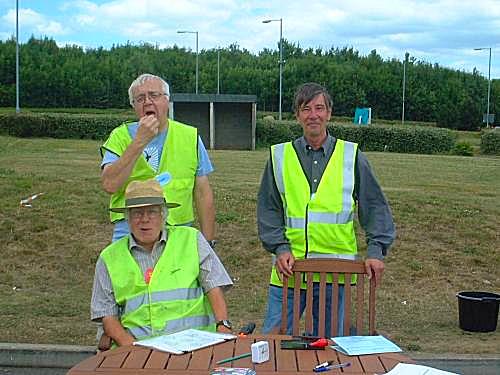 I tried to keep Crow Watch quiet with pear drops. They were also used to bribe the Starters to fill in Rear Observation surveys so I could gauge their average age.

Note for next year: Give out very sticky toffee.

Wishbone took control of Crow Watch comprising his brother Terry and Alan Jarvis who came all the way from Canada to help. No, we don't pay travel expenses!

Terry Wright is new to our group. He wasn't a Phoenix member because he started courting before the club was founded ... and we all know what that can do to motorcycling. Terry did a couple of National Rallies before "retirement". Here is his 1959 award. 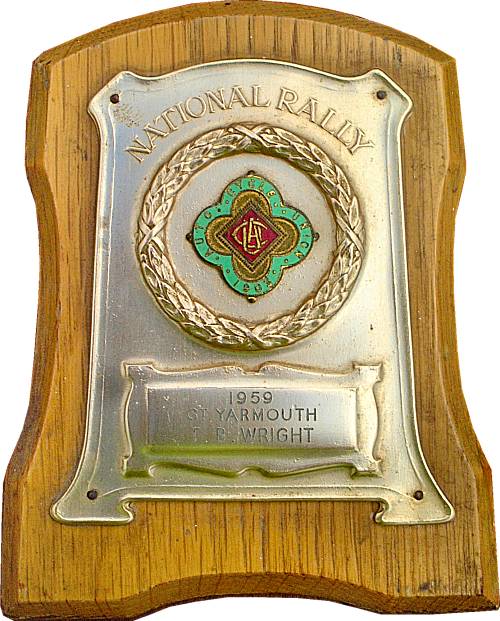 Note for next year: Look up phone number of a pawnbroker.

Kegworth is one of the Controls close to MIRA where the Platinum Award special tests are carried out during Saturday morning. Therefore we had a good crowd of starters waiting for 2pm.

Note for next year: Take flag (and starting pistol for stragglers).

After the starters had all zoomed off we had a 20 minute wait for the riders from the adjacent controls to arrive. But this was not the quietist time of Crow Watch; for more than an hour, from before 4pm to after 5pm, there were no riders at all.

Note for next year: Pack the dominoes.

Bill Price arrived with his caravan during Crow Watch and set up in case of wet weather. Two years ago Steve White tried to erect a tent but gave up because the wind was too strong. Last year our parasol had blown away in a squall. This year we had a gazebo in case of showers but could not put it up in case the breeze tipped it over. The Club used a gazebo for the Big End control tent and held it down with tubs filled with water. So far wind is more of a problem than rain.

Note for next year: Ben is not to eat beans for breakfast.

In return for all that super food we allowed Mary to inhale some of Alan's cigarette smoke. Ain't we generous?

While Owl Watch took the Control into darkness Crow Watch flew off to The Otter for a few pints and pub grub.

Note for next year: Save up more beer money.

We expected riders to funnel into MIRA final control through Kegworth during Sunday morning but, funnely enough, the surge began during Owl Watch with riders coming through from 9 to 11pm Saturday night. Maybe they heard about Mary's ginger biscuits.

Note for next year: Bring sticks to beat off the gannets.

It was easy enough to get riders to the Kegworth Control but getting them back out again was another matter. The cakes and sweeties attracted them like flies and then they couldn't find their way back out through the car park. More than one went out through the No Entry signs and down the wrong side of the dual carriageway. Must have been on the French team!

Note for next year: Provide maps of the car park. 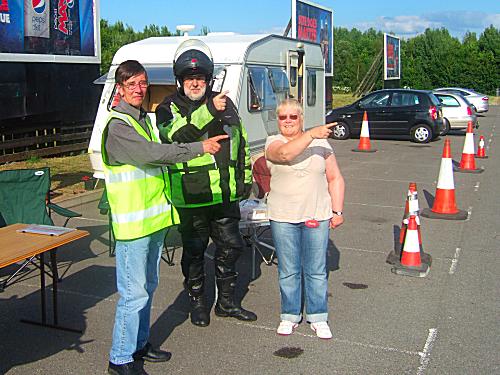 After a relatively quiet handover from Owl Watch to Bat Watch at midnight Dave Scattergood and Ian Goodson fielded another wave of riders from 1am through 3am with a brief respite before the homeward bound riders began to pass through.

The weather throughout the event was dry and bright but the cloudless sky saw temperatures plummet after a hot day. Riders stopped to pull on extra layers of clothing during the night ride. Bat Watch was almost reduced to huddling together to keep warm ... almost ... but not quite! Bill saved the day with bacon butties.

Dave Scattergood did sterling work with bucket and sponge removing the remains of moths and other flying insects from headlamps and visors. What is the last thing to go through a moth's brain as it hits your visor? Its arse! It wasn't just the headlights that attract insects - hi-viz jackets became covered in black bugs as the marshals soon discovered.

Note for next year: Swap hi-viz jackets for Cammies. 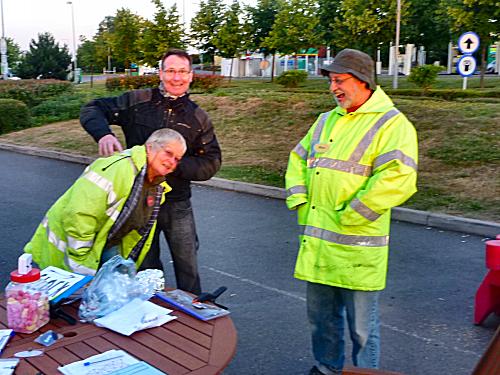 As dawn broke and the baton was passed to Lark Watch the number of riders increased. Marshals sat with teeth chattering in the morning chill until Steve White had the brilliant idea of moving the control out of the shadow of the advertising hoarding to make the most of the sunshine. 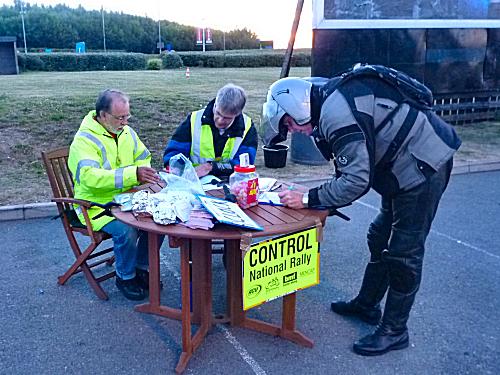 The last two riders signed in at 8.53 and Lark Watch stood down two minutes later.

Note for next year: Get a bigger clock ... get a faster clock! 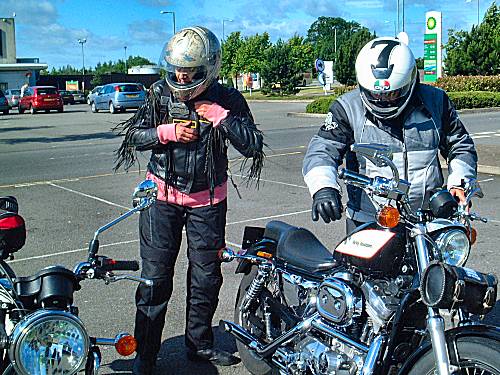 Thanks to all the marshals, including John Ireland on Hawk Watch emergency cover who was thankfully not called upon. They make this event a pleasure from start to finish.

Note for next year: BRING IT ON!!

Well we survived another year. Really enjoyed it this year, must be having big bro with me.

Have just spoken to Andrew, he made MIRA okay. Had a slight hiccup going to Thetford as the police diverted him and he signed in with 2 mins to spare, that cost him half an hour so he was then having to chase, but he managed it okay.

Bill wants to book himself in for next year, he enjoyed it - you watch, he'll be wanting a bike next! Don't think his wife will allow it haha.

A great night at the Kegworth branch of the retired LPMCC past members. Terry and I had a reminiscence session, almost in tears, or maybe it was the first box of cheese straws we finished before 9.00 oclock.

Thank Mary and Bill for the food, the rallists didn't get much.

Put me down for next year!

Will be at the Founders day on the 18th.

See photos of riders passing through Kegworth Control and a selection of photos from the Final Control back at MIRA.

The National Rally really was amazing this year! I was helping on the Final Control at MIRA, and had such a laugh! The photos don't do the day justice.