Past members of the Leicester Phoenix MCC have operated controls at Kegworth and Syston for some years. COVID-19 means marshals are not required in 2020 so they are available to enter the rally as competitors.

Dave was a club member through the 1960s, supporting all activities on his immaculate TriBSA. Dave entered the National Rally for many years before joining the marshals. Dave will be campaigning his Suzuki motorcycle on yet-undiscovered roads in an effort to blow out the COVID-19 cobwebs. 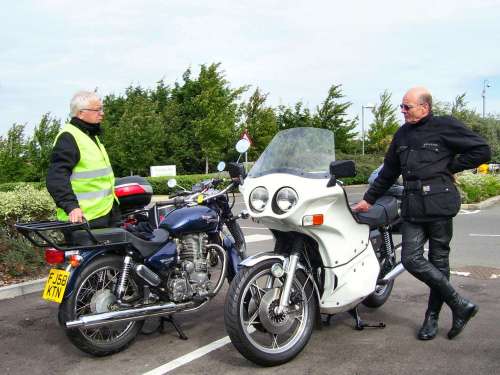 Dave Parry in heroic pose with his Suzuki before a ride-out in 2011.
On the left, Peter Wright, another Kegworth marshal and Dave's Comm Officer for this year's NRR.

Dave joined the club in the early 70s and was immediately thrown in at the deep end, assisting with our World Record, editing Megaphone the club magazine, and in various committee posts as well as teaching maintenance and highway code at the club's RAC/ACU training scheme. Dave went straight from riding in the National Rally to marshalling... and now back again!

Dave Smith on his trusty Commando introducing his son Damian to the delights of the NRR.

Dave has provided two accounts of riding the National Rally; first in 1977 for Megaphone and 35 years later, after the 2012 NRR.

Terry supported the club through the 70s and 80s, most notably as a very active Public Relations Officer when he inevitably led by example, recording many rally exploits for Megaphone. That's when he wasn't instructing on our RAC/ACU (later BMF) training scheme. Terry's work took him out of the area, so he now vents his boundless enthusiasm on Mayflower MCC but is taking a day off to support his alma mater.

Terry is threatening to take Sue along to navigate their Platinum route in the north-west.

Started at Newby Bridge at 09.00 and finished at Ingleton at 18.54. No major issues (one missing control card at Wooley Bridge, sorted later). Total mileage was 454 and a very good day out.

There are some photographs on the official Facebook site. I have also attached my tried and trusty method of crib cards per control, even though I have a built in sat nav which I just used to run a rolling map.

No worries about lack of signal of battery going flat.

Celebrating a successful platinum with a pint at Syston.

At the pub where the Leicester Phoenix MCC inaugural meeting was held nearly 60 years ago.

Usually we are marshals at Kegworth but decided to do this year's rally. Hopefully back to Marshalling at next year's rally.

Dave Parry with more of his minions.

That is the great fallacy: the wisdom of old men.
They do not grow wise. They grow careful.

Embers are past members of the Leicester Phoenix Motorcycle Club. Many are still riding motorcycles but work, family and life has moved them away from the Club. They still retain firm friendships forged out of shared experiences on the road, on rallies, breaking down, falling off, organising and taking part in club activities.

Leicester Phoenix MCC is where we chose to spend our time; we were not conscripted by catchment area or employment. These were people we went out of our way to be with, and still do.

Like the club, we remain inclusive. We drag in friends, relatives and strangers who are friends we are still to make.

We may have lost our youthful flame, but we retain the glow of the Leicester Phoenix Embers.