The original design was worked out by member Geoff Lumley and Ray Barton had it made up. The Phoenix badge was printed onto the back of perspex and was nicknamed 'The Strangled Duck'.

The machine badge was produced by Renamel who put the finishing touches to the design and the result is the finest motorcycle badge in the world. 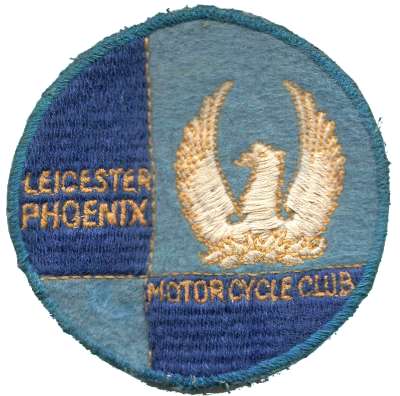 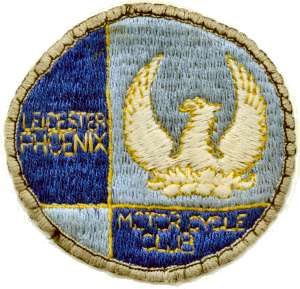 This is the slightly smaller version from the 1970s. The edge stitching was black but this one has faded. 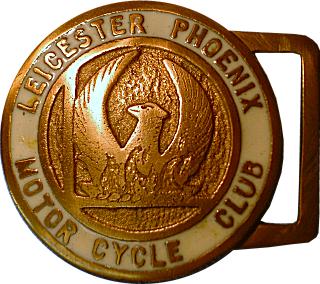 In the late 70s Nigel Staley cast a set of brass belt buckles. They are built to outlast the human race! How many of you still have one? John Sim has. The one shown is mine with faux white enamel picking out the club name. 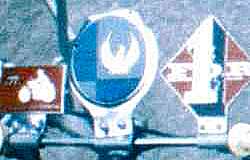 Over the years the badge has adorned a number of items including a live rhinocerous's horn and our 21st birthday cake way back in 1982. 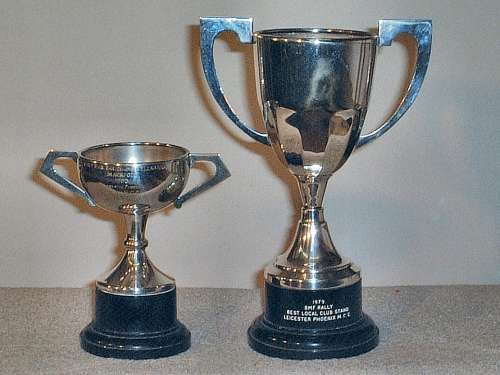 Rarely removed from the bank vault, here are some of the awards the past members won for the club. On the left the Daily Mail Concours d'Elegance from the 1963 Blackpool Motorcycle Show. Engraved 'Leicester Phoenix Touring MCC'. On the right the trophy for the best local club stand at the 1979 BMF show. We are still searching for the Best Local Club Stand trophy from the 1960s shown in Chris Mansell and Clive Hodgkin's Woburn photos.

Download the Phoenix badge as a scalable Windows Metafile (.wmf) for high quality printing in Word, PowerPoint and other Windows applications.

Bloody good site. Did many rallies 70s 80s. Poor health stops me now but sites like this are a real tonic.