North of the Border

Alternatively, "The best time to visit Scotland is June 30th at 10:30" (Little Britain) 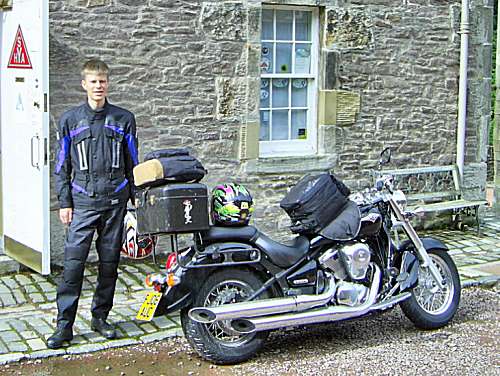 I had to wait from February for the first supply to arrive at the dealers. Kawasaki only sent 32 from Japan, to share around 80 dealers. However, the wait was well worth it, as I shall tell in my story. Incidentally, the second choice of bike on my short list was the 1600 Meanstreak. The significance of this shall be revealed at the end.

It took me a week or so to get the bike in for the 650 miles short service, we were then ready to ride.

After some discussion between Michael and me about where to go for the Bank holiday weekend at the end of June, we decided on Scotland. After all, the weather forecast for northern France was 30°C, that's no good for biking, is it? So Thursday night found me in the attic dusting off my old Craven rack which used to be on my Rocket Three. By removing the chrome trims from the rear mudguard of the bike, the rack fitted very well. So well in fact, that I was able to sit on it. Then came the old top box which, when opened, revealed some bumf from the last time it was used. That being the BSA Rally in Holland, 1977. Who said "time flies"? Next, was a quick visit to John Ashworth to borrow a tank bag and then to the packing.

We planned to use the Scottish Youth Hostels during our trip, they provide good accommodation for a reasonable price. Also, one doesn't have to carry camping equipment either.

We set off on Friday morning in full wet weather kit, a good decision as it happened. The first fuel stop was somewhere on the Doncaster road, a bit traumatic though. We were creeping along on the garage forecourt, looking for an unoccupied pump, when Michael looked to the right and pointed, with outstretched arm, towards some car he had described to me earlier. Well you have to look don't you? The next thing I know, I'm loosing the bike. Michael sits with both feet on the rear pegs, shouting "We're going over". I think "I knew that". The problem was; I couldn't hold the bike up with one leg, not with all that weight. Anyway, we managed to hold on to the bike between us. Panic over! The rest of the day was pleasant apart from the inevitable rain.

We stayed that night at the hostel in New Lanark, where we had stayed earlier in the year. It was once part of a cotton mill and self contained village. The rest of the site is now a museum, well worth a visit if you are in that area. You need more than a half day to do it justice. Because we arrived late, we just dumped our kit and rode into Lanark for a meal. After all, we had only done 6 hours that day.

Day two, Saturday, we set off for Skye.

The plan was, to go by ferry from Mallaig to Armadale and return via the Skye bridge.

Glasgow on a Saturday morning is not the easiest place to ride through, it seems to go on for ever. Once out the other side though, on the A82, the scenery changes and, with a few patches of sunshine, it was like riding into paradise. We stopped at the side of Lock Lomond, as one does, to stretch our legs and bums. We spent some time talking to some folks who were loading canoes with kids, for a camping week on a small island in the loch. What a great idea! 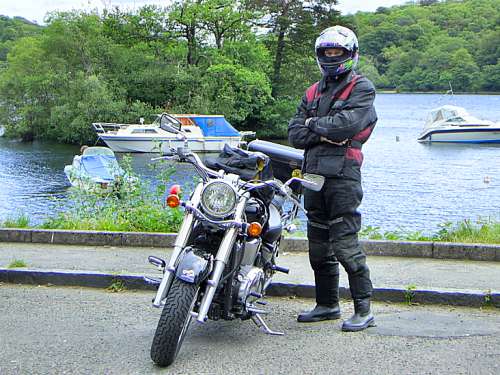 As close as you can get to Loch Lomond.

We followed the A82 up through Crianlarich, Tyndrum, Ballachulish and then on to Fort William. I soon came to the conclusion that we were not the only people to think we were in paradise. Bikes out numbered the cars, not that there were many cars anyway. Despite the rain, low cloud and some Scots mist, it was a joy to weave around the bends over the moors and up and down the mountains. Who would want to ride over the Alps in the sunshine anyway? The road surface was good, considering the terrain, and increased my confidence in hanging my arse off the seat a bit to avoid having to replace the sliders under the foot boards too soon.

We stopped in Fort William for a very late lunch. It must be the worst part of biking, getting most of your kit off to eat in a café, only to put it all back on again an hour later.

We set off again on the A830 through Glenfinnan and Lochailort; this was tougher going with thousands of bends to negotiate. The latter part of the journey from Lochailort to Malaig was really hard work. With a lot of water on the road, some single track sections, with pot holes, loose gravel and a rutted surface that pushed the bike from side to side. We arrived at Mallaig in the early evening and had to wait half an hour for the ferry. We took a walk around the town for a while as the rain had stopped. 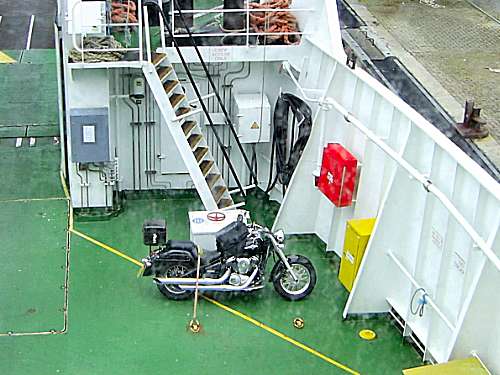 The bike all alone on the ferry.

The ferry was well equipped, as comfortable as any cross channel ferry. We tucked into hot chocolate and Mars bars while looking down onto the vehicle deck at the lonely motorbike out in the cold while we were as warm as toast.

The ride to the Armadale hostel on the island was only 200 yards, we unloaded and walked to the pub for a slap-up meal.

Day three, saw an improvement in the weather.

Our plan was to ride the short distance to Glen Brittle in the Cuillin Hills and do some climbing. However, it took us about three hours at a much slower pace. We checked into the Glen Brittle hostel and ate lunch.

The self catering hostel is a 2 storey Norwegian log building, with a vaulted roof to the dormitory upstairs. 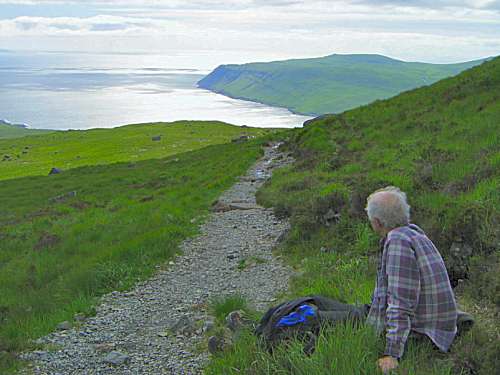 The view from Sgurr Alasdair.

We spent the afternoon, in glorious sunshine, climbing Sgurr Alasdair, some 1009m high. I took a photo standing on the lip of the corrie looking out to sea, the exact spot where I had stood some 38 years earlier, on a camping trip with John Ashworth. Back to the hostel then, for an evening meal prepared by ourselves and washed down with some beer, what bliss.

The night wasn't quite so blissful though. The forecast had said strong winds. For once they were right. The wind was blowing straight up the valley and howling around the hostel. Although the bike was parked between two cars, the alarm kept going off. So I zapped it from the window and went back to bed. 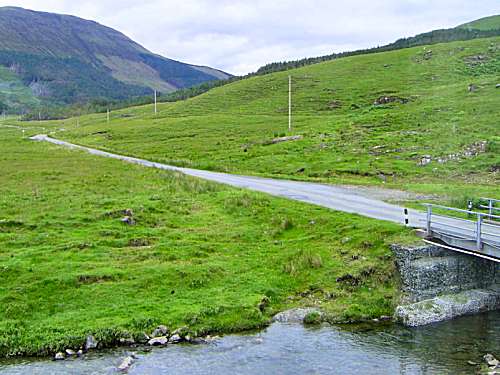 The road to Glen Brittle.

Basically the clouds were down to the ground. Still, after a good breakfast, we set off northwards, towards Kyleakin and the Skye bridge. Not a pleasant ride, as I had to ride with my visor up at 30 miles an hour with a wet face. This was further exacerbated by me going the wrong way in Harrapool, which added 40 miles to the trip. Never mind, we were on holiday.

We stopped after the bridge, as the mist had cleared and took the opportunity to study the map. A group of about a dozen lads on sports bikes rolled into the petrol station next to us. We saw them many times during the day as they took it in turns to fill up at stations along the way. We, on the other hand, were able to go all day on a tank. The route took us along the A87 through Invershiel, past Loch Cluanie then south to Invergarry where we met the A82. South again, to Spey Bridge where I just had to stop and took a nap on a picnic table. Nobody gave me a newspaper though.

The weather now was much better and the rest of the day was uneventful. We stayed at New Lanark that night, after what had been the longest day with a total of nine hours in the saddle.

Day five, was the reverse of day 1.

I asked Michael "Would it have made any difference to the trip if we had bought the 1600 Meanstreak?" His answer was "no".

It's surprising how much torque Kawasaki have given the 900. 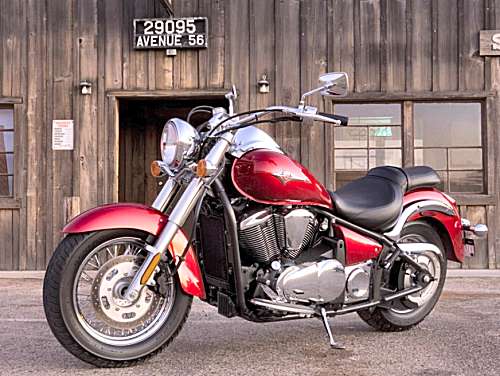 A damn good report, great pics. Other people could do the same. Please share your pleasures with the rest of us. It may inspire a few to get off their backsides and have a ride out and write a few lines.