Life isn't all beer and skittles they say. For the Leicester Phoenix Motor-Cycle Club it also included motorbikes as well. 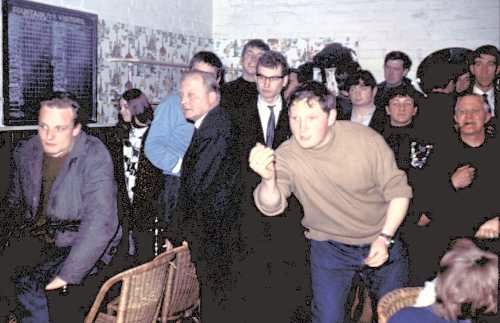 The above picture was a match with the Clifton and District. If some of the people have numbers instead of names and you know who they are, please put number and name in Contact Centre notes and send them in.

In the late seventies I organised a long overdue skittles match against the Corby & Kettering MCC and arranged it at the Chequers in Swinford. The landlady agreed to do food for 20 to 30 and I promised firm numbers the weekend before.

Members were slow putting their names down for the team so I asked them to get their act together or risk looking foolish when the C&KMCC turned out in enthusiastic force. Then I rode over to the George at Desborough where the C&KMCC met. They didn't have many players either so I asked Phil Barton and Stu Drage to rustle up support and phone me the numbers. Then I rode back to the Cricketers for our confirmed numbers.

That weekend I went over to the Chequers to apologise about miscalculating. "It doesn't matter, we can do suppers for just four or five if necessary." said the landlady helpfully. "The problem is in the other direction." I admitted sheepishly. "There are 92 booked and paid."

The landlord was aghast. "No, we cannot do that many!" he said firmly, unable to imagine where we would park all the bikes. But his missus was thinking of all that money. "Yes we can." she insisted. "We will make the suppers up the day before and just do the hot things on the night."

So the clubs met for a great night out. Of course it was too crowded to play skittles but no-one seemed to care. 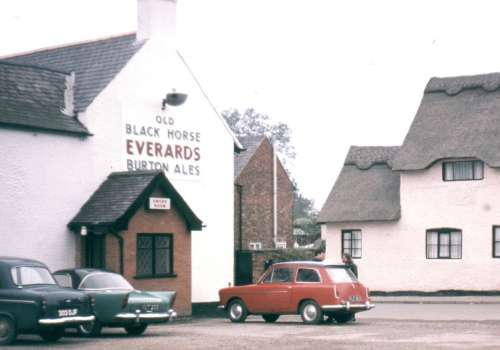 We played skittles at a lot of different pubs (perhaps we were not welcome back). Can you recall any of the following?

The Bassett Arms in Sapcote is now houses... sob

Before then it knocked through the adjoining wall of my Grandparents house to make the pub bigger.

My Grandfather was the village wheelwright, blacksmith, carpenter, coffin maker etc etc and his house was attached to the Bassett Arms.

Sapcote used to be a very sleepy village. I can recall the farmer who lived on the opposite side of the road driving his cows up the village street for milking with the sound of plop plop plop as they dumped their message on the road. I guess now they would be run down by speeding motorists.

Here are some memories from Martin Sentance.

The Bluebell at Hoby, which was a late serving pub, with excellent Everards beer, and was the usual Saturday night place to go, come rain or shine, snow or icy roads, many of us made it to and from the Bluebell, which often held a late night sing-song round the piano on a Saturday night.

The Golden Fleece at South Croxton, which was the usual Friday night haunt come rain or shine, etc. and was always a late serving place, with Ruddles and Guinness, and yet more piano music. A good fun place to spend your wages on a Friday night. I recall the Ruddles was a bit variable at times, and once when I returned a pint to Jim, the landlord, telling him " this pint is cloudy", the abrupt reply was that you are lucky, you have only got a pint of the stuff, I have got four more barrels in the cellar!! One Friday night there was an impromptu race back from the pub to Woodhouse Eaves, as I had had so much to drink, I needed assistance both to start the bike, and to keep it upright. So several club members thought the best action would be to follow me home, to make sure I actually got there. Fortunately I did, and survived to tell the tale.

The Fountain Inn, Sileby, was the usual Sunday night get together, to recount the day's club run, or whatever fun we had been having that weekend. Doris and Bert ran the place, and were a very sweet elderly couple who I suppose really belonged in a different era. 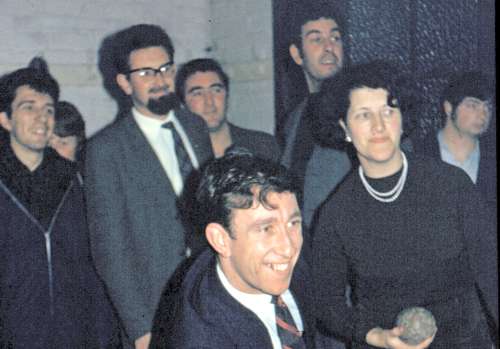 Long alley skittles with a Nottingham club, possibly the Clifton and District.

I hope website visitors from Notts can tell me some names from their team.

The Free Trade, also in Sileby, was sometimes visited on a Sunday night, when the landlord and his wife very often did a convincing impression of Basil and Sybil Fawlty. I remember one hilarious Sunday night when the landlady had had a fall and injured her leg. She was upstairs temporarily incapacitated, whilst the landlord was rushed off his feet in the bar below. There followed the hilarious scene of the landlord trying to serve customers, with the background noise of his wife banging ever louder on the bedroom floor with her walking stick to attract his attention and give instructions!! 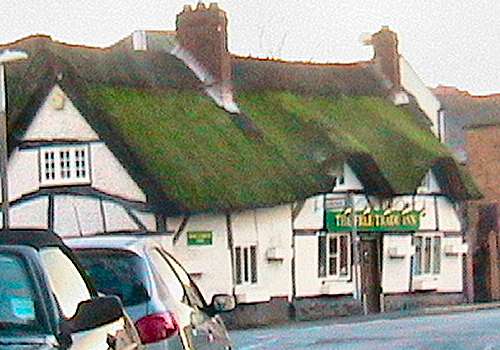 A splendid club run one week-end saw us setting off for Slater Bros, near Bromyard (incidentally a place I still visit) along the brilliant biking roads of Worcestershire, and the first of many visits to that superb pub off the beaten track called "The Live and Let Live". You really needed a trials bike to reach it, but the quality of the beer and the unique location of the pub made it well worth while.

There are photos of the Live and Let Live in Dave Parry's Pics and Pete Vines' collection. 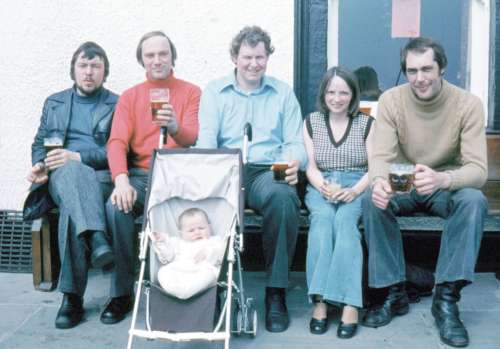 Dave Smith wrote a piece about a club run to the Glynne Arms, Hinley for the Megaphone back in 1976. I wonder if the pub has fallen over yet. 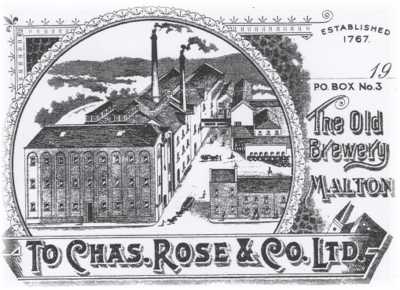 I have just found the brewery of one & three penny beer mentioned in the In The Basket Rally report.

Rose's bitter could be purchased in a little bar reached through a My Cellar off license down the side of a now demolished large hotel situated opposite Scarborough train station.

The bar was only known by Scarborough locals. The door to the bar from the off license was not labelled. It looked like a door to a stockroom.

It was the cheapest beer in town at the time. The most expensive was the new fangled Red Barrel at two & six a pint in a roadhouse on the Seamer Road.

Rose's Brewery was founded in 1767 and is now a commercial and housing development. It brewed its last best bitter (at an OG of 1036 degrees) on May 2nd 1969. Its history can be traced with certainty back to 1780 when it was owned by Mr John Walker.