Any excuse to go for a ride. Treasure hunts were usually a map based exercise on finding the way to a . . er . .pub.

Routes often included some unmetalled roads and the competition revolved about who could extricate themselves from the mud first.

Of the great times I had with the Leicester Phoenix Motorcycle Club and all the rallies, club-runs and other places that we visited, the memory of this day is my favourite and still brings laughter whenever I think about it.

I cannot remember the year, but I will guess around 1965?

The Rally-Treasure hunt was organised by one or more of the LPMCC committee members. The starting point was out near Groby I think? There was a really good turn out that day, about 15 bikes. 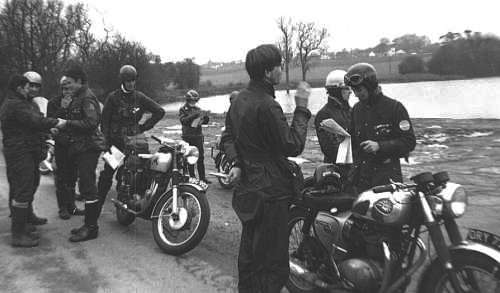 This was my first event of this type and I looked forward with anticipation in finishing first. I had intended on riding solo but at the last minute Dirty Eddie had mechanical problems and I had the privilege of him riding pillion and acting as navigator. 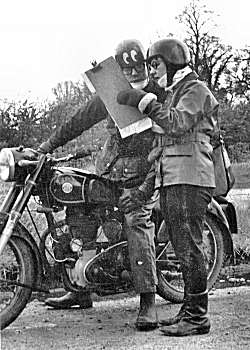 At the starting point we were told that there are 3 check­points and that our time and the mile­age would be recorded at our arrival at each check­point. We were handed a sheet of paper full of clues and puzzles which we were told would identify the route, the location of each check­point and our final destination. This is were the fun begins! 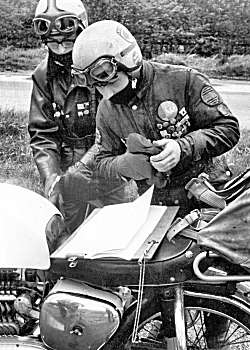 At the alloted time we took off from the start on my Velo Viper - like it was a race, we rode a few miles in the direction of Bradgate Park then pulled over to read the clues. After looking at the map and the clues Dirty Eddie and I agreed that we had figured out the way to the first check­point however, some of the clues looked like they had been written in Welsh! Our problem now was not to get to the first check­point too early, so we slowly made our way behind Bradgate Park to were the first check­point should be! When we arrived at the spot, no one was there! Eddy says "you drove too fast, the people assigned to this check­point probably haven't had time to get here yet", so we waited! Eddy had some sand­wiches in his pocket so we sat down and ate them, that killed about half an hour. Now the thought entered our heads, what if we are wrong about the location of the checkpoint? 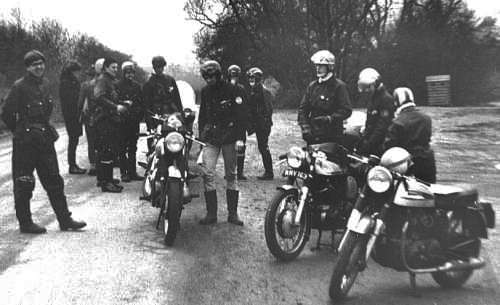 We studied the clues again and set off towards Beacon Hill, that's got to be the place! On the way to Beacon Hill we arrived at a 4-way crossroad and met up with 3 other members of our group all travelling in different directions! We met at the corner had a chat and big laugh but no one was sharing any information! Then Eddy and I decided to forget about the first checkpoint, lets see if we can find the second one. Our interpretation of the clue to the second checkpoint took us a long way from the Bradgate-Swithland area, in fact it took us a long way from Leicestershire! After a while both Eddy and I noticed that we hadn't seen any of the club members for quite a while, this didn't seem right somehow. So, we turned around and headed back towards the last place we had seen one of our members. By this time it was getting dark, both Eddy and I were beginning to despise the crumpled wind-blown clue sheet and all the falsehoods it represented. As a last resort we had to tear off the piece at the bottom which disclosed our final destination. This turned out to be a pub on the "Six Hills Road". 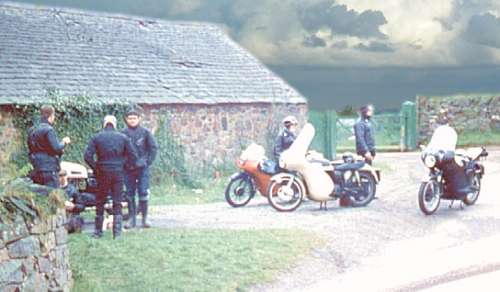 By the time we found our way to the pub, most people were on their 3rd pint! However, Both Eddy and I had a gift and we managed to catch up real fast. It was during this catching up period that I could see the funny side to all that had happened that day. Eddy and I had failed to find a single checkpoint. The route was supposed to be 41 miles and we travelled 187 miles. In addition, we lost 50 points for tearing off a bit a paper.

I never did receive a first place badge or a trophy for this event, but have a happy memory that will last a lifetime.

The photographs are from a later treasure hunt organised by Bruce Gibson. The one Alan recalls was organised by Dave Parry. Lol Mounteney zoomed round on his Tribsa with Ben Crossley navigating from the pillion. They didn't understand the purpose of the timing and went round the course very quickly, passing everyone else. When they reached the Six Hills Road Ben shouted to Lol to go as fast as he liked, which he dutifully did. Dave Parry was amazed how early they arrived and then took off all the marks for being ahead of time. So Alan may not have won, but he didn't come last either. The hares had that honour.