Looking back on the performance of LPMCC.net over the previous year is useful as it gives guidance and inspiration for the coming year. Look at the targets I set this time last year.

I threatened to subject you to another Survey in October. FAIL.

Although I let you off the nag of pop-up questionnaires again last year, I did turn off error suppression in July and directed the reports to your Contact Centre. It generated a few valuable warnings of problems on LPMCC.net.

I proposed to tackle more complex technology (PHP/MySQL and Apache) and migrate the website to a professional server. FAIL.

Early in the year I renewed my contract with Plus.net which is where LPMCC.net lives. Also improvements to CSS and HTML5 make server side scripts less necessary. However this will go forward for review in 2011, partly because of cost but mainly because having photos on a different server is a huge complication.

We expected to pass 300,000 visitors some time in 2010 and shot through that easy target in April, blasting through 350,000 in October. I was also hopeful of exceeding 10,000 visitors in a calendar month and after coming within 39 of that figure in January, watched figures slump as low as 7,500 while you were all gallivanting about on motorbikes in September. The icy cold of winter must have kept you at home because LPMCC.net eventually exceeded target with 10,915 in December. PASS.

Not directly connected with LPMCC.net (except that it could be a conflict) but I was optimistic about getting the Trident back on the road. FAIL.

Another year without the Trident on the road but I did get to ride my daughters' motorbikes.

The steadily increasing number of visitors to LPMCC.net is remarkable for a special interest site. Things that bring people to the website are the photographs, badges, reminders of friends and shared events through continuous new and unique content provided by viewers like you. It is my privilege to present that content in a way that reflects the fun we had.

In an effort to bring the photos to your attention the thumbnail links were extended to all sections over the past year. A merry-go-round of thumbnails on the index pages of some sections flaunts them in your face. Every rotating thumbnail is a link to a page with full size photos.

To help you progress through pages of similar subjects, sometimes across sections, 2010 saw the introduction of page top tabs inspired by the new look BBC website. The big advantage of this simple graphical metaphor is that it allowed the notorious pop-out Main Menu system to be reduced back to three levels of hierarchy. Earlier in the year I had despaired of ever bringing some control to the temperamental Main Menu.

It is not only human beings who need to be able to find all the pages of LPMCC.net. Search engines use automatic programs to crawl through the site looking for content to index. How else would new visitors find the site? To make it easier for "bots" to find all the content I did two things during the year.

First I put a full list of all the pages into the Site Map. The links are in plain HTML so "bots" should have no difficulty understanding them. Originally the list was hidden from human eyes in fear that a catalogue of over a thousand pages would totally daunt any prospective explorer. It was too much effort to waste on mindless "bots" so the index was format as an expanding list such as you see when you look at My Computer. This conventional list of pages is an addition to the peculiar diagram at the top of the site map page.

Second I constructed a page of all 2000 rally badges with descriptions so that Google can add them to its image library. The page is not included in the menu navigation because it would take absolutely ages for all 2000 badge pictures to open on your computer. The badge pages in alphabetic order are quicker to appear but they are written on the fly so they may not be visible to "bots". [As of writing this Review I'm still waiting for Google to make use of this]

Last year I began to increase the number of external links that take you to other websites with related content. Some sites are a little bit obscure and ephemeral. They exist while the webmaster has the time and interest to maintain them. They may disappear without warning, which would leave LPMCC.net with a broken link. Therefore I add a trick function to make the link disappear if the site is no longer available.

Mobile phone access to Web content boomed throughout 2010. Some years ago I tussled with WAP pages but I doubt there was any take-up of the resulting content. Now the field has changed and it is fairly easy to surf on the move. Screen size is limited and user input is a bit fiddly. Therefore LPMCC.net is now available as a mobile phone page at LPMCC.net/mobile/ that tells you just the things you want to know - What's New - What we are Doing - and, of course, a daily Foz fix from the archives!

The National Rally has become an opportunity for many past members to take an active part in an enjoyable (dare we say exciting?) motorcycle activity. Wally Bradshaw has been Chief Marshal and for some years and benefits form the reliable support of Mick and Helen Ayriss as travelling marshals. Last year Andrew Grant and Dave Smith took part again and Dave was accompanied by his son Dan and Phil Freestone. Meanwhile a host of past members, friends and relatives partied at the Kegworth Control between interruptions as competitors passed through. Carole and Peter Juby, Rachel, Katie and Sacha Crossley rallied to Wally's appeal for assistance at MIRA final control. 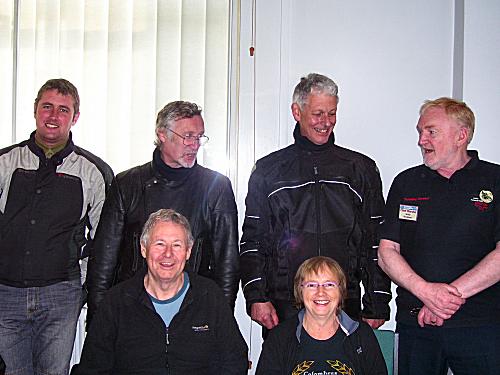 Past members were active at many events throughout the year, Easter Egg and Charity runs, the second Tuesday visits to Ashby Folville, shows at Peterborough, Stanford Hall, Lincoln and Motorcycle Live at the NEC. Most events are documented in the 2010 Gallery so everyone can share some of the delight that we still get from motorcycles.

Fifteen new pages with 245 photos made up the 2010 Gallery. Fifteen new reports were added to the Rallies Section, some hot-off-the-press and bang up-to-date and others from the 60s, 70s and 80s. The largest increase was to the Activities section, partly due to Graham Seaton's exotic photo reports on his travels in India and many new pages reflecting preparations and post mortem of the National Rally. A total of over fifty new pages in 2010. Add a further hundred updates that put new content on existing pages, over fifty news updates forty Blog entries and you get an idea of why my Trident is not yet on the road.

Not everything was good news.

Sadly we lost Rob Goddard last year. A keen BSA rider who was a member through three decades, Robs pungent humour will be sadly missed.

Lila Hessin attended Big End Rallies and was an active member of the Leicester Phoenix MCC right up to the end despite her illness.

Their memories live in our hearts and some are recorded on LPMCC.net. Photos and anecdotes are welcome as it may bring a little comfort to their friends to know how much we think of them.

On a brighter note, the July error reporting resulted in the scrolling jokes disappearing from the top of pages. At best they caused page opening problems and at worst they were a distraction. The humorous lists have been added to the Foz archives.

For a couple of years I have abused innocent kittens as scapecats for my anger on discovering errors. This joke has now run its course so, before the above wet pussy comes back to haunt me, in future I will rely upon your kindness to let me know when a rare fault occurs on the almost purr-fect LPMCC.net pages.

I will not set myself low targets and then fail to meet them for the coming year. This time next year we should be well on the way to half a million visits. With luck the monthly visitor numbers will remain strong and delight me by surpassing 10,000 from time to time.

I have a backlog of badges from Nigel Woodthorpe and The Black Russian to work my way through.

As past members find more free time through retirement there is a growing interest in a few leisurely motorcycle rides to local places of ... er ... interest. LPMCC.net is not a bike club. I strongly hope that these runs will take place as part of the Living Club. Membership costs £10 and it is a special year to return to the fold because it is the Leicester Phoenix MCC 50th Jubilee.

The year also promises to be special for our part in the National Rally because our Kegworth Control may have an extra role to play. It would also be appropriate to field teams on this year's rally.

Thank you for recommending LPMCC.net to the friends who share your interest for the glory days. That is how we discover old members and new friends.

Thank you for sending in new and old content for everyone to enjoy. Filling in a name, sending a scan of a faded photo or a line about a past event is all that it takes to make my day and bring a smile to someone when they discover it.

Thank you for your loyalty to LPMCC.net throughout the seasons. I hope we will keep you smiling through 2011.