It has been a year of ups and downs at LPMCC.net. Much of my time has been spent being modest about the ups and hidding the downs. Now I'm going to blow down my trumpet and 'fess up.

Server failures dogged us throughout the year. This was really bad news because it often removed LPMCC.net from the web entirely. We went off-line in March and May and had continuous issues through July to September. Since then I've kept my fingers crossed and mouth shut. It is a tribute to your loyalty and patience that this has not impacted adversely on our general success. Thanks.

Riding along on the crest of a wave.

Visitor numbers have continued to climb slowly; on occasions they have topped 10,000 a month. Page views are about 5000 per month above last year's figures and with good reason; there has usually been about four new or updated pages every week.

We have visitors from all over the world(wideweb). Many from Europe are drawn to the website by our European Rally List with data provided by Hans Veenendaal and his team. I suspect most of them use the mobile page.

This year I struggled to put together a team to run Kegworth Control. Thanks to regulars Peter Wright, Dave Parry, Rob Winnett, Mary and Andrew Grant and new recruit Grahame Billington, we managed. Hopefully in 2015 there will be fewer weddings - although Christening may cause a problem. 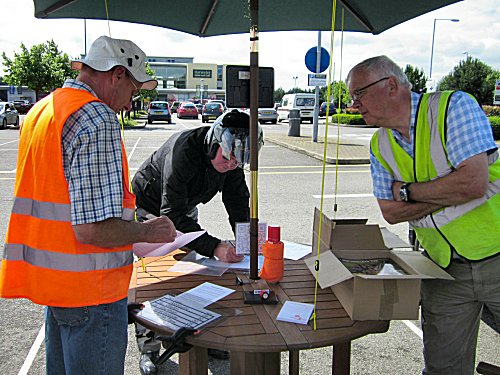 In 2013 I promised National Road Rally riders that we would post the true (Google) miles between controls and even suggest routes. Best laid plans went awry when we tried to get the scripts to work in the fraught weeks running up to the rally and I could not deliver on that promise.

We still produced an interactive matrix for the NRR that was well received, and produced a new moble phone page that conveniently carried details of the controls in the order you planned to ride the rally.

Again we recorded riders passing through Kegworth in our searchable photo page and afterwards emailed full size photos to competitors who requested them.

As usual I managed to accummulate a backlog of badges due to the collecting powers of the Rally Collective.

Over the year we added about a hundred badges to remind you of great times. That may be an up but there are still a hundred to be done.

"Don't look up!" (Derek's cry on approaching a hill)

Embers cycling group has gone from strength to strength in 2014. We regularly have ten or more riders seeking a comfortable pub.

April was a particular highlight with a five day tour centred on Morecambe and, later, a fifteen bike turnout when we nearly had to fight a funeral party for food.

Down to the Nitty-Gritty.

An accumulation of details that needed to be done better drew my attention from time to time. I am prone to fidgit and fiddle about when I know you deserve a higher standard of presentation.

Up, Up and Away

Up to more mischief.

There will be a lot more of the same. We are sure to have a bumpy ride!