Our three Elephanteers have finally arrived at the Nurburg Ring and spent their first night under canvas - now read on.

After having a late breakfast we wandered over to the Ring and took some photographs of the bikes. There were hundreds of them from all over the continent. Some were terrific and really geared up for the cold weather. Other motorcyclists were taking advantage of having a drive round the track.

We checked in at the office and paid our money for the rally badge to be posted on. The time seemed to fly by. There were a few firms selling spares in the paddock. Dave Parry and Ben Crossley bought a visor each to help them on the way back. The hotel at the side of the track was quite a length and the whole of the ground floor was a restaurant. We were getting cold so we went in for a warm and a coffee.

We had missed dinner and were back for tea so we went back to the tent to have a good tuck in. It must have been after eight and we were finishing off our meal when a couple of freelance photographers asked us if they could take some pictures. They told us they were trying to get them into some international magazines and said they would send us some. They must have been good, we haven't seen them yet.

Sunday morning we woke in the dark, or so it seemed. When we saw the time we realised that something was amiss. Upon looking out of the tent we were confronted with another 9-10 inches of snow.

Everywhere around people were busily packing their gear for the homeward journey and quite a lot were having trouble starting their machines. I watched one chap trying to start his B.M.W. with nine inches of snow on the pots. As we were late getting up and then having to dig our gear out of the snow, besides getting the bikes to go, it was quite late before we started on our homeward journey. We hadn't much daylight left and with not having any lights on the solo we decided to ride until dusk and stay at a hotel. We stopped at a hotel at Blankenheim and after all that time in sub zero temperatures it was like an oven. While we were having a cup of coffee in walked four other motorcyclists who were also from Leicester. They decided to carry on and we invited them down to our clubroom to see the photographs we had taken.

After a good wash and shower and some dry clothes we went downstairs and had a really good tuck in. We were all feeling pretty pleased with oursleves for making it to the rally and were glad of a chance to relax. The hotel beds were quite different to ours as there was no top sheet and blankets. It had a great big bag just like a pillow all filled with feathers and you just slipped underneath it. It was that hot that we turned the radiators off and opened the window.

It hadn't snowed during the night and the roads were fairly good but we decided to get Ben and his solo ready and let him set off straight after breakfast. We thought that if the roads were worse ahead we would catch him up and it would also give him more daylight hours to make it to the boat. When we had seen him on his way we had a look around the village and took some photographs.

Ben had by now about two hours start on us so we decided to get going. Our plans were soon spoilt as the throttle stuck open and we took a righthander broadside and stopped only by using a stationary car as a buffer. The owner was quite reasonable about it and we agreed to pay for the damage on the spot. It didn't do us much good however as we were left with a shattered sidecar and two missing spokes and a bent wheel shaft. A German lad who could speak English said there was a cycle repair shop near so we took our troubles to him. Although he hadn't any thick spokes for the wheel he made do with some moped spokes and with the help of his welding gear we soon had a straight axle again. While he was doing the repairs the local baker invited us in for a drink and some of his hot scones. We were really looked after. About an hour later we returned to the repair shop and collected our parts. The German had done a great job, really first class and he said that the charge was four marks (8/-). Very different to the take it or leave it attitude adopted by some of our local repair shops. 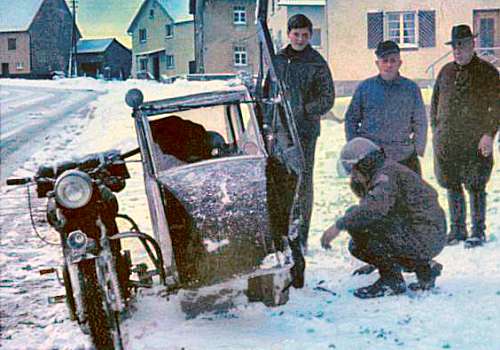 When we had replaced the parts and repaired the smashed perspex with polythene given us by the baker we set on our way again. We arrived at the German border on the autobahn at 6.20pm and it didn't look as if we would reach Bologne for the 10.30 boat. We had had enough of the cold and decided to give it a try. It was quite dark by now and very cold but we had set a good pace down the autobahn and were making good time. I was watching the signposts and checking them against the time and it looked like being a very near thing. Our speed was reduced for about half an hour as we ran into a blizzard but fortunately it only lasted for a few miles.

We had been driving on for hours and we were getting quite close. The speed of the machine had increased as Dave knew that time was getting short. Suddenly the engine faltered. We were now in sight of the lights of Bologne and we could see a lighthouse flashing away in the distance! The engine cut out and all was quiet but we were coasting. I saw Dave put his hand under the tank and the engine burst into life and we were off again. We had run out of petrol and he had to switch to reserve. Ten minutes later we pulled into the quay only to find it deserted. The time was 10.20pm and the boat had sailed at 10 o'clock. In the corner of the car park was a combo, which was also deserted.

Feeling annoyed for being so near and yet so far we went in search of a cafe. We went into one and saw the owner and two passengers of the combo on the car park. They were regular visitors to the rally and knew the ropes. We were delighted to hear that a boat sailed from Dunkirk at 2am. We had a good meal and warm and then set off with the others to catch the boat. On the way one or two more bikes caught us up and when we arrived there were a few more motorcyclists. About 25 of us were on board when the boat sailed.

We were well and truly exhausted after our run from the German border and then another 30 miles from Bologne to Dunkirk. We made ourselves comfortable in the lounge and were soon asleep. We were too tired to feel seasick.

It was about 6 o'clock when we arrived at Dover and it was cold, wet and dark. Rotten weather and rotten time to wheel the combo out onto the road. Still we were back in England and it makes a difference to know that you'll be sleeping in a warm bed this night.

After leaving Dover the rain changed to sleet and then to snow and it was getting thicker. After about 12 miles of following cars that had travelled on the ferry with us we stopped and that was it. Two hours of digging and stopping, stupid car owners trying to drive past the queue of cars when the road was blocked by a lorry. Not even a combo could get by.

We were determined not to give up after all that way and after a lot of swerving and pushing we broke through leaving the cars behind. All the way from Dover to Leicester was shear hell and it was a lot worse than we had encountered over the other side of the Channel.

It took us twelve hours of skidding and wheelspins but looking back it was one of the best motorcycling times I have spent.