And Someone Said More Money Than Sense

All Commando journeys are a marvellous experience, dear reader, with no vibration or mechanical troubles; the only problem being a surplus of power.

Well, some folks always seem to strike it lucky for the day of swapping a recently straightened Commando for a recently new Laverda dawned bright and sunny. The weather was to remain - for January at any rate - glorious all day. My lift arrived late (not an unusual occurence) and a leisurely 9-10am departure from Huntingdon Road was the order of the day. To stop the Laverda from getting lost on the return journey a Loughborough member of the Phoenix accompanied us on his 500cc Suzuki. Fortunate as it happened because the Laverda, or at least its pilot, didn't know the way back through Coventry.

The journey down was uneventful. All Commando journeys are a marvellous experience, dear reader, with no vibration or mechanical troubles; the only problem being a surplus of power.

Whilst we left our ferret to sort out his financial deal with Mr Slater, Suzuki Sam and myself surveyed the Slater emporium . Well perhaps emporium is too strong a term for this set up, farm workshop is perhaps more appropriate. Must be relevant that nearly all Laverda dealers seem to be engineering concerns. Anyway, after drooling over a Ferrari Dino and several 1000s both of the assembled Laverda type and the disassembled Vincent ilk, we set course for home aboard ferrets new trademark. For those of you with limited knowledge SFC means in Laverda a quick way to kill yourself and we emphasise quick.

The Suzuki, as its weight befits it, was used as a lorry to transport the seat that our intrepid electrician had wangled out of poor Mr Slater. 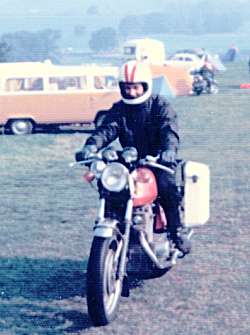 The journey home according to observers present was tackled with rather more gusto than the outward run and ferret assured us that this was because the machine handled better than his old Commando, though this did little to restore a rather worried pillion passengers nerves. However your reporter managed to remain calm enough to count all six occasions on the first day that the owner reached for the nonexistent kickstarter instead of pressing the electric start and this after he had expounded the virtues of starting by electricity to everyone's boredom in the previous weeks.

Reassuring for both its new owner and a still occasionally worried passenger were the excellent brakes. Both front and back (identical brakes are fitted at both ends) are of the twin leading shoe variety though they do not employ the usual cam method of actuating but instead use a system of links and eccentrics which Mr Slater assured the buyer gave complete freedom from the usual twin leader problem of the brakes locking and being snatchy in the wet. Yes I wouldn't attempt to outbrake this machine even on a disc braked lightweight such as a Commando.

The owner assured us that vibration was nil on the front but I wish he'd told my feet because they had the idea that the machine vibrated and said so by regularly vibrating off the ends of the footrests. Since the machine is so expensive I suppose we'll have to take Phil's word on the lack of vibration especially as someone now relegated to a Honda 350 threw Phil's last new bike up the road.

Difficult to assess accurately from the passenger seat but the amount of go seemed less at low revs than the Commando but because of its five gears the Laverda would no doubt keep up with any 750 on acceleration and no doubt leave most on top end. However, judging by the number of missed and crunched gears, either Phil is forgetting how to change gear or the Laverda has a worse gearchange than the Norton. But then, few makes can rival the Norton for gearboxes for road use.

Looks and finish are good and average respectively though the engine would seem to be an excellent piece of engineering judging by the ample internal dimensions of the spares we saw at Slaters. How well they will stand up only time will tell and though Slater remarks upon their reliability in racing it should be added that Commandos also enjoy excellent engine reliability in road racing and we all know what happens to them when used on the road.

The combination of Bosch lights and certain Italian components seem to have at last given a motorcycle good lights as a standard fitting.

Finally I suppose everyone will be asking was it worth £1000. Well that's a question you'd better put to the new owner, though I don't think Mt Slater will see my money - at least, not for two cylinders.

Sequel to the above:

Scene:- The Fountain car park at Sileby
Time:- Closing time Sunday night
Action:- Philip, ever the penniless motorcyclist, decides that since the Laverdas cost lots of pennies then he should probably economise by not putting any petrol in the carburettor. He therefore decided to start the motor sans petrol. Even the Italians don't make bikes that good and so the Laverda stops. And would it start? Would it h--l. After nearly flattening the battery we resorted to that old modus operandi, pushing. Scriv set off pushing with such vigour that no-one else could keep up but all was to no avail 'cause Laverdas don't seem to like being started that way. Eventually the breathless party (Laverdas are very heavy) was caught up by a certain Mr Bradley who with hands in pocket proudly proclaimed that the electric start should now function and blast it all he was right. Like all good tales this one ended happily. After warming up the Laverda we all proceeded home to sleep off the effects of Doris and Bert's hospitality.