My Route To Becoming An AJS Owner

I first became interested in motorcycling as a hobby after I passed my test on a Honda 50. That was when I bought a '57 Triumph Thunderbird 6T from one of my school mates who at that time was trying to finance his start in racing a 500 Norton. I hope my £50 helped him.

That 6T was a nice bike with no bad habits that I noticed. It burnt a bit of oil but amazingly that was cured by fitting new rings; it didn't need a rebore. That only left the oil fountain from the rocker shafts but I managed to put up with the blue-black jeans. I kept that bike for about six months until it got a little bit too much for my pocket money to cover. So I said bye bye with a consoling £70 in my pocket.

I had a rest from bigger bikes and ran that Honda 50 that I had passed my test on for six or seven months but inevitably the bug bit again Ouch! I knew I wanted a British bike but I didn't know what. As I work in a financial establishment I could have bought a shiny new lump at reasonable rates, but somehow that didn't attract me as I like messing around with engines. I wanted a machine that would need working on which meant either a new "Suyamasakda" or a second hand British bike. Due to my preference for British I put an ad in the local rag. The result of the first reply now resides in the garage. It's an oiltight (yes it does have oil in it) 1962 AJS 16S Sceptre. 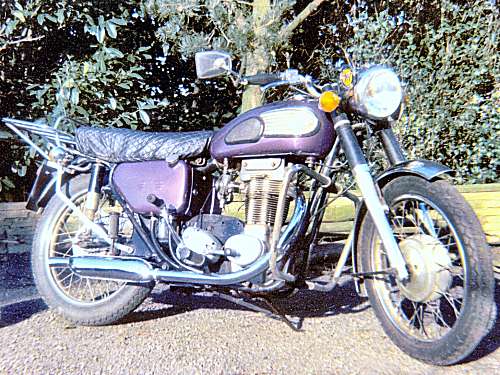 This fine example broke the bank at £60 - well he did give me a good toolkit and a spare piston. This old chap had just bought a new Ural 650, maybe he has regretted it since. I fell in love with the AJS immediately, as I said it's oiltight, starts first time, does 70mpg when ridden hard, which is great because I use it to go to work each day, a 20 mile round trip. So the way I see it this will be my transport for the rest of its or my life.

I have had a minor problem. After I had done about 3000 miles the head gasket went. So after I eventually received the correct gaskets I merrily set about taking the lid off. As there was a ridge at the top of the bore I took the barrel off. Ow! The rings were seized in the piston and anyway there was a hairline crack in the piston from the gudgeon pin to the top. As it needed a rebore I decided to use the spare piston which was +30thou. 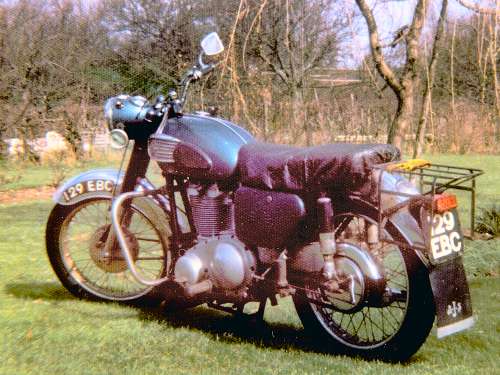 The bike is now rebuilt but I'm still waiting for side panels, tank etc which a friend is respraying for me. It shouldn't be long now though I hope.