Having made a very rash promise of an article for Megaphone if a certain committee member (not clean shaven with 850 Norton) could be encouraged or otherwise made to dance at the club's dinner dance at the Golden Fleece, I lost out as you can see. So here is an article on how to make a lot of noise and enjoy yourself without upsetting the wild life (Bears).

Having built up a 250 Ducati over the previous year I started racing in June 1974 at Snetterton. Dave Smith and I set off to Snetterton and camped overnight. I entered 3 x 250 races and so was up against mainly Yams. On the race day I got three lots of practice in and frightened myself to death. People said I went fast on the road but you should see how quick people come past you on a race track. No holds barred with passing clearance of about 12 inches and this was only practice.

In the first race, to say the least, I had butterflies about the size of jumbo jets. When the flag dropped it was like a battlefield with people pushing bikes and lots of smoke and noise (nasty Yams). I got away OK but was passed by most of the grid and was lapped on about lap 4 or 5 and I came in second from last.

The second race was just the same as the first but not as worrying except that the clutch was dragging and made starting nearly impossible, then the rev counter broke so I pulled out of the third race, packed up and went home. 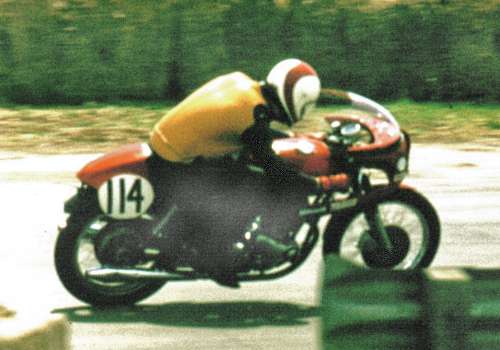 The next two meetings were also at Snetterton and with more knowledge of the circuit and being more used to the bike I was reducing lap times by about 2 or 3 seconds a race. Until the gear lever dug in on a fast right hander and picked the rear wheel up and out about a foot. This deterred the rider considerably and I did not try so hard after that. The bike was performing OK though and finished the first season without any trouble in the engine department.

The second season was started with the fitting of hairpin valve springs instead of the harder coils as these had badly worn the cam followers. With the bike being revved to 9000 any missed gears meant a bent exhaust valve at about £5 a time. This was not too bad until I fitted a proper high lift racing camshaft, then the Duke seemed to consume an exhaust valve at every meeting. Most of the meetings in the second season were spent with a good engine in the first race to no compression due to bent valves in the second and third races. This state of affairs lasted all season. The rider and mechanic (Dave Smith) were not in very high spirits at the end especially after pushing the bike up the mountain and back to the paddock twice in one day at Cadwell. 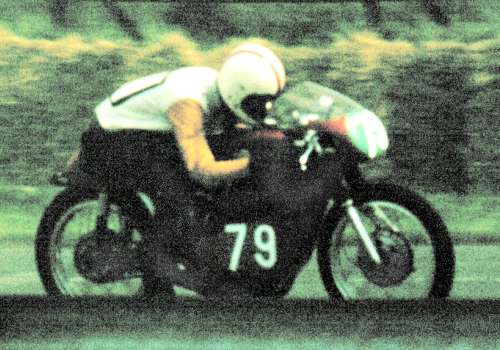 At the end of the season I said that we had got to cure the valve trouble or pack it up as a bad job. Fate seemed to play a good turn for once. Mick Walker could not fit a new bottom end to the motor so I went to Bernie's at Watford to get it done. Having told him about the bent valves, he had suffered the same trouble and had some Terry's springs which cured the problem. I only needed to adapt the old collet holders to fit the new coil springs. I also fitted an under-swept exhaust to complete the mods.

The first race of this season was a Bantam racing meeting at Snetterton. In practice all seemed to be OK with the new valve springs fitted. It was a 12 lap event and all went well until the sixth lap when, having just put her into 4th gear and pulling about 8500, there was a loud bang and no go. Having pulled the clutch in all was silent. The breakdown van came and I got a lift back to the paddock to see Dave and Martin hopping from one foot to the other wondering what had happened. Apart from no compression and a horrible noise nothing could be found wrong but when I got home and took the head off I discovered the inlet valve had dropped in, hit the piston and other valve and double bent the valve stem. It seemed that the collets had pulled through the top spring collar. Two new spring collars were made and no more trouble has been had from the valves all season.

The next meeting was with the Grantham Pegasus at Cadwell. I was entered in 2 x 250 single cylinder races. In the first race me and the bike really clicked and we even lapped some of the field. I finished in 5th place with 3rd 250 home. The rest of the season was really enjoyable with most races seeing me in the top six and collecting two trophies for my efforts. The last race for 1976 was at Cadwell where I entered four races. The 250 races were a great scrap with Cub with him beating me in one race and a reversal in the second race.

The four stoke race was combined with the production event and both the kick start and bump start was used at the same time which resulted in some hectic moments on the grid. Both races saw me upsetting a 500 Seeley and a BSA Goldie (a red one) by leaning on them all the time and even overtaking the Seeley at the gooseneck. He was set up next to us in the paddock and was not very pleased to see it was a 250 that had been upsetting him. Well that's the end of another season and it only remains to thank all who helped me.