Who won 1st prize in the raffle?
Elephant Rallies and a trip to Amsterdam

Derek joined the Leicester Phoenix MCC soon after being demobbed from the RAF. He was a member throughout the 60s. During that time he did a stint as treasurer to organise fund raising raffles and club night auctions. His encouraging phrase was "These parts aren't for use on your motorbikes - they are just for buying and selling!" 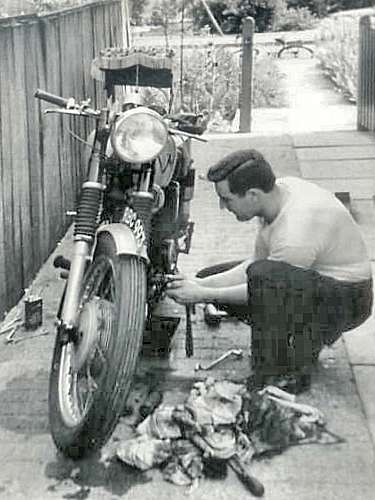 Derek's shed in Mountsorrel was a gathering place for many members who wanted a part fettling or respraying and he could have made a living as a second hand Matchless salesman from all the bikes he provided.

After leaving the club Derek started his own woodwork business in Mountsorrel but has now retired to Tenerife. From there he keeps in touch via the internet. He is a pioneer of Skype Nyte where his droll humour keeps us under control.

Derek likes jazz and was a keen pistol marksman. Although he is not motorcycling at the moment he has cycled down Mt Teide. He had a triple heart by pass recently so next he is going to cycle up the mountain!

If Derek ever had a nickname he must have assassinated all witnesses.