If you listen to Don Jackson on 103 The Eye he tells the same joke as Eric.

Eric Tindall was club chairman in the early 1970s when he lead the club to take the World Record for 24 hour non stop motorcycling, a pivotal event in club history that is recalled by many members who took part.

Eric and Sue have one daughter and live in Melton Mowbray.

I'll try anything once but if I don't enjoy it then I don't do it again!

Eric has now retired from the hum drum life of going to work. (It was easy peasy really). His main interest is being a petrol head and driving the wife to and from the shops to buy food! No change there then.

Eric has a love of classic cars that he indulges from time to time but has recently acquired a Honda Goldwing that he is keen to put to good use. 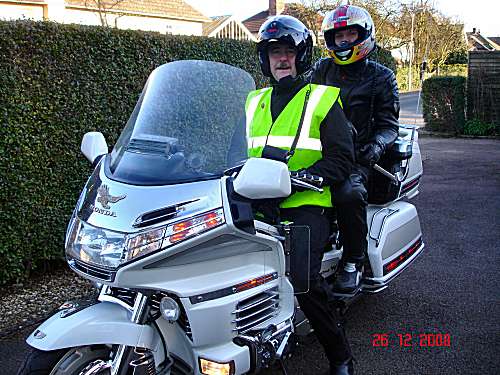 The Wing isn't Erics only motorcycle:

You may wonder why I am sending all these pictures, well if you promise not to say a word I will tell you.

I have been restoring the bike for over 30 years and can't remember how the hell it all fits together and what the finished article should look like, so if you will challenge the combined brains of all the LPMCC ex-members we should be able to work out at least where the headlamp and hopefully the tyres fit!!!

Click to pick and click to drop. Mind you don't get one square on top of another.