Membership Sec in 1960s
The affair with the spider.

Tony found us when doing a search on Tony instead of Anthony. Here is the update in his own words.

You probably remember I worked for John Cheatle as a shop manager way back then but I forged a career as a sales rep working for a lot of companies including Kraft, Bowater Scott (Andrex Toilet Rolls), Stewart Plastics (Garden products) finally as UK Sales Manager with Smithers Oasis (it's the green foam you arrange flowers in). Did that for 12 years until the age of 60 and the pressure of handling a 7 million pound budget and travelling all over the UK got the better of me.

I took the opportunity and became a Salvation Army Officer (A church minister) in the inner city of Sheffield until we retired to Clowne.

Val and I have four children - Vincent married with 2 kids who lives in York and rides a Honda VFR 750 - Vikki lives about 10 miles away and finally twins Tara and Kate. Tara lives in Plymouth and Kate lives in New Zealand.

We currently volunteer with a Charity called Samaritans Purse going out doing talks on our trips to Belarus and Swaziland. This keeps us busy. 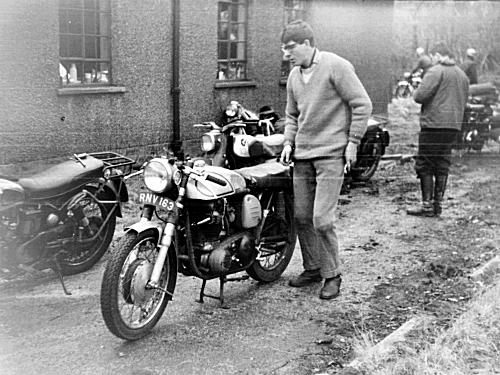 Unfortunately the Norton was the last bike I owned but you never lose the buzz of hearing and seeing bikes. My son Vincent and I attended Mallory Park for the racing for many years until he moved up north.

Plain Tony could be confusing at The Rocket, what with Tony B so we usually called him Loachy. Or Tony. When did he become Anthony?