The bike was well known for going places fast and coming back on the train.

Although it was the standard CB92 and not the Super Sports model this early sixties Honda 125 had remarkable performance especially with high compression pistons. On a run to Hunstanton after a Saturday night rebuild the bike did 90mph on the straight road from Kings Lynn with the rest of the club run strung out behind. At Hunstanton Dave Parry asked "What have you got in that?" and I replied "Castrol R!". Dave exploded "I know that! We've been breathing it for the last ten miles!"

It was running on R because I figured its unreliability was due to poor oil circulation. I didn't figure out that it could be me even when I did an oil change and forgot to replace the steel washer in the centrifugal oil filter. The alloy filter rotated against the alloy casing and promptly siezed solid.

By 1966 I had joined a bunch of bad characters known as the Leicester Phoenix MCC and hurried down to The Rocket, Stephensons Drive every Wednesday night. One night I told my dad that I would take the bend past the back entrance to Bradgate Park at 70mph and his reply was "You'll kill yourself". He was very nearly right. After bouncing off two cars I and the Benly were both badly damaged and off the road for a few months.

After the accident my plans for a touring holiday had to go on hold and instead I joined my parents on a holiday at Lowestoft. I took my dad for a ride to the docks at Great Yarmouth so he could reminisce about his years sailing out of Cape Town. On the way back he seemed keen for me to go faster because he was franticly beating his hip. We stopped for him to extinguish his burning pocket caused by the wind whipping his pipe into flames.

After watching the World Cup Final in Lowestoft I made a cross-country run to join the Club at the Brighton Motorcycle Show. Up to this stage the engine was still fairly standard and it was not running very well at all. I could get past the lorries going downhill but they all came past again as I struggled uphill. It was time to tune up the engine.

The Honda was fitted with a dolphin fairing in time for the club outing to the Blackpool Motorcycle Show. Soon afterwards the whole bike and fairing were painted black.

By the following year I was confident enough to tackle a tour of Scotland with my blue igloo tent strapped to the back of the Benly. On the third day I reached Pitlochry in Scotland but disaster struck when the front pinion sprocket of the rear chain came off the stub shaft and was lost somewhere along the road. I could not find a Honda dealer locally so I eventually telephoned Ken Ives in Leicester for them to send a securing plate so I could fit the spare sprocket I was carrying. Days went past with no plate in the post. When I phoned again they said "There are two types, we were waiting for you to get in contact to ask which one you wanted." I was furious "For heavens sake, send them both and I'll return the one I don't need. I'll even pay for them both, but put the damn things in the post!". At least I eventually made it home on the bike that time 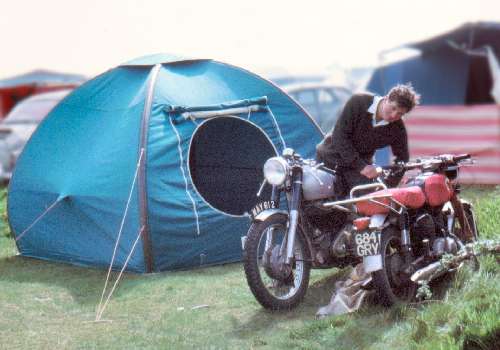 There is a bit about the forks breaking on the Lake District page and an account of the bikes recovery in the piece about Malc Sheppard who drove me and Lawrence Mounteney back to the lakes with spares. The new forks were red so I changed the quilting on the petrol tank sidepanels and seat cover to red to match. The pressed steel leading link forks were not suitable for clip-ons so the Benly was fitted with combination bars. The problem was I could never get them completely tight so they changed position while the bike was being riden.

The bike was well known for going places fast and coming back on the train. It was trained back from Sandbach and Garstang on the way to the Lake District, towed back, trailered and eventually sawn up and brought home in the boot of Derek Foster's Austin at the end of 1967.

From this bike I moved on to a 500cc AJS 18s that proved to be a lot more reliable. Perhaps I was learning the first rule of bike mechanics. If it ain't broke, don't fix it.

I remember the Benly and the tent. Couldn't believe the size of it strapped to back of bike!