The Gospels According to Haycraft and Neill

The AJS was a 500cc heavyweight 1953 model 18s registered in 1952. It came via Derek Foster who had found two bikes for about £10 or £15. I had the better of the two and started to clean it up. The rims, spokes and brake hubs had a couple of coats of aluminium paint and the mudguards were replaced by stainless steel versions. Later on I changed to wider handlebars so I could heave a sidecar into line.

The AJS was an incredibly reliable machine especially bearing in mind it was me who did the maintenance. In all the time I owned it it only once failed to get home under its own power. The top came off the piston when I was hammering over Shap on the return from the Trossachs Rally. Other times the magneto may fill up with water or a valve develop a hole but the AJS could still limp along. Whenever it needed some work on the engine I would just drop in another. I accumulated two or three for spares.

Old guys would gaze at it and go misty eyed. "How do you go on for spares?" they would ask and I'd explain that I had a garage full but never needed them. I reckon that is why the British motorcycle industry went belly up - once you bought one of these it would last until you were issued a harp and halo. They could never sell you a second bike! 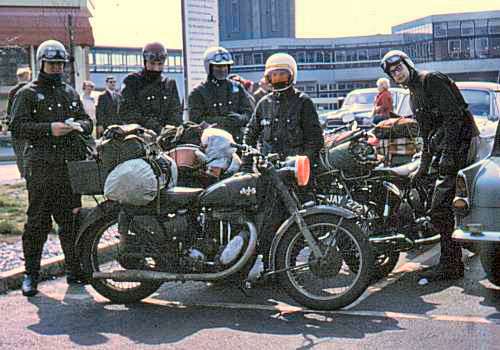 All maintenance was carried out with reference to two small books that I referred to by their authors as "The Gospels According to Haycraft and Neill". I bet I still have them somewhere.

It certainly wasn't a fast bike but if some youth on a sporty 250 wanted to drag race from the traffic signals I would craftily click into third, slip the clutch and plonk off down the road ahead of the kid frantically winding through his gears. (Then he would wizz past.)

At one time I adopted the system of replacing the dual seat by my tent for going to rallies. It meant I couldn't ride anywhere when the tent was up and I started to get a sore derriere.

After riding it solo through snow and ice to the 1968 Elephant Rally I thought it was wise to get a sidecar.

I worked on the sidecar in a lock-up garage behind houses on Dorothy Road. They had no power so I worked by the light of tilley lamps suspended from the ceiling.

The bottom needed repairing and Derek gave me boxes of fibreglass and resin. The hardener must have gone off because it never set. I had to scrape it all off and start again with fresh resin.

My dad's face said it all. "You've got a sidecar on it now, stupid!"

There wasn't a seat or hood with the sidecar so my dad made a seat and I made the hood that is shown in the photo. It was a sheet of clear acetate wrapped over a wood and aluminium frame. There was no way that the passenger could open it once locked in by loops of innertube.

I also used old innertube sections to assist the torsion rubber bush sidecar suspension. Silly really because I worked for Metalastik at the time and could have put in new bushes for nowt.

For the sidecar fittings I went to a bike breakers in Warwick - someone can probably remember it. When I asked for sidecar fittings the guy took me into the yard at the back and showed me several boxes. "Help yourself" he said and went back into the shop. Being a breakers of course he had the 'scrap yard dogs', two bleddy great alsatians. The bitch was quite friendly and just ran about the yard wagging her tail. The dog was chained to a post and spent all his time barking and lunging at me, jerking the chain and pulling on the post. I went through the boxes of fittings very quickly because the chain and post didn't look up to the job!

All the setting up was done to the book, toe-in, lean-out, smaller front sprocket, stronger units to replace the jampots and sidecar springs and a friction damper on the Teledraulics.

When the bike was ready to be tried out my dad sat in the sidecar to 'weight it down'. The first parked car I came to I put the sidecar into the back of it. My dad's face said it all. "You've got a sidecar on it now, stupid!"

Fitting the mudguard was a bodge job. Mild steel rods were attached to the sidecar frame with exhaust clamps. They were not up to the roads in Ireland on the Shamrock Rally and had to be welded back up. The rods were replaced by thicker versions every time they broke until I eventually inserted rubber bushes into the system. Once the shock loading was removed there were no more problems with fractures and the sidecar bulb also lasted longer.

The yellow fog light was more for show than purpose. If I ever turned it on I couldn't tell. Also the twin air horns were a bit hit and miss - like my driving. That was solved by connecting them to a stirrup pump type tyre inflator that was attached to the sidecar swan-neck with tennis racket clips. A quick pump on that would clear the roads for miles.

Because the AJS was so old (well only 20 years at that time) the electrics gave some problems. I eventually narrowed it down to poor earthing through the frame and solved it by wiring all the earth connections (including rubber mounted sidecar mudguard and rear light) directly back to the dynamo. Then I stuck an enormous VW 6 volt battery in the back of the sidecar. Problem solved.

I removed the solid 16 inch wheel and fitted an 18 inch spoked wheel from another chair. This had a brake that I coupled to the back brake lever of the AJS. It worked a treat with just enough braking to pull the combination up in a straight line.

Tripoint, handlebar mits and legshields made it perfect in the winter. A motorcycle combination is better when the roads are slippery because it is less likely to tip over. Also you have direct control between twistgrip and rear wheel without any differential trying to spin a wheel.

I telephoned Pride and Clark to ask if they had a Burman gearbox with reverse gear and they had. I still regret never getting round to sending off the postal order.

The seahorses on the front of the sidecar is taken from a pictish design on a stone cross in Aberlemno kirkyard. It appealed to me because of its asymmetry, just like a motorcycle/sidecar combination.

A combo powered by a 1952 500cc heavyweight single didn't build up an awful lot of speed. I wouldn't like to take it on the motorway these days.

The content is great, but the layout is appalling. What is the little writing all over the text about? Below the photograph is fine.