Another bike I am not sure that I ever really wanted, but it grew on me.

When I worked at Carter Gears Ltd in the early 70s lots of people used a motorcycle to come to work. We had a large motorcycle park/bike shed and the bikes there ranged from mopeds to 750s and occasionally a 1000cc SS80 Brough Superior!

One of the small bikes was a Honda ST70, owned by Billy Turnpenny, who was at one time my shop steward. He had bought it new at Bradford Motorcycles in 1972 and I think its first service there was the last time they saw it. I don't think it was ever actually serviced, only repaired. Nor was it ever cleaned! Year in, year out it took him to work and back. When things went wrong he would bodge it up and do just enough so he could ride to work the next day.

At MOT time I used to help sort out the worst of the problems and make it 'safe'. Billy was always appreciative and said that when he had finished with the bike I could have it.

Eventually the bike died. Billy was convinced it had finally had it and bought himself a 125cc MZ. I was told to come and collect 'my bike'.

So, what had finally killed it? Nothing serious, the plug lead was a bit long and had looped down and rested on the hot exhaust pipe which eventually burnt through the insulation and shorted out the spark. I replaced the lead and the bike was as good as new, well, not quite but good enough to go to work on and park next to Billy's MZ!

The next week or so I sorted out most of the major problems. The kickstarter and gear lever were welded on because the splines in the shafts had worn out. The return spring on the kickstart was a bungy cord, as was the centre stand spring. I managed to get an old Honda 70 bottom end that had most of the parts I needed and splashed out on new rings for the rebuild. After that it ran really well. A good clean and some Hammerite on the rusty bits it even looked reasonable.

However, due to the gearing the maximum speed, even downhill, was 30 mph. How moped riders etc stay alive with restricted engines I don't know, but I was scared to death riding it in the rush hour traffic. You couldn't command your place on the road and ended up pushed into the gutter. This meant that I hardly used it but it was ok for nipping to the shops or I could put it in the back of my van when I took that for its MOT and have transport home.

After about 5 years my MOT man suggested I got the speedo working as he had noticed that the mileometer had never moved since I first took it there. He sold me a cable - capitalist!

It was always a reliable starter and even after being parked for 6 months or more it only took one or two kicks to putter into life and tick over smoothly. The petrol tank held less than a gallon in total including reserve but as it did over 100mpg this was not a big problem. I never bothered filling up at a petrol station, I kept a can in my garage and just nicked petrol out of one of my other bikes to fill it up. This went wrong when I got the tins mixed up and topped up with paraffin. The bike didn't run any differently, maybe a bit hot, but the smoke!!!! It was like destroyer laying a smoke screen. I had to ride home and drain it. 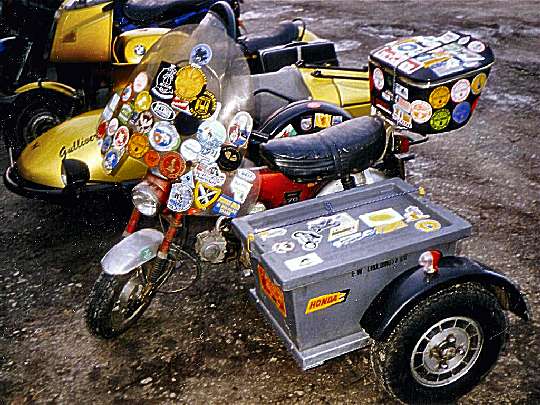 I used my ST for the Hibernation Rally a few times and a couple of camping weekends, suitably modified for touring! I even fitted a sidecar to it. Why? Because I could.

Eventually, probably because of its early life of neglect and salty winter roads, the box section frame was suffering from serious corrosion. I decided I didn't want to spend the time and effort to strip it, weld it up and restore it so I offered it for sale at a local autojumble. I must have priced it too cheaply as I had a crowd of people all wanting to buy it! Monkey Bikes seem to be popular again now but most seem to have a bit more performance available, either due to tuning or oversize engines.