The Poser Rally is Druids MCC's summer rally, in winter they run the Icy Ale.

The event is marquee based and is held at a site not far from Grantham.

It's on the weekend nearest the summer solstice. I usually go up to Glen Coe for that, but this year I decided to stay a bit more local as I had only just got back from the Isle of Man.

There seemed to be a good turn out of German bikers (racing turtles MCC?) amongst the three hundred or so people at the rally.

The weather was superb, and I had a great run down from Bradford via Melton Mowbray where I called in to Len and Marita Tempest to ride the last few miles following Len's Rocket Three outfit.

Saturday was spent looking around the site at the bikes, and relaxing. Barry Carter arrived on his Honda Rhune, an incredible bike!

There seemed to be quite a few interesting bikes on site, I tried not to take any pictures of new Harleys, but some of them were show quality.

The Enfield had been zooming around the field all morning, but spent the afternoon in bits, some things don't change!

The Gold Wing / Busmar outfit also did a few miles around the field carrying more and more people, but it survived in one piece! 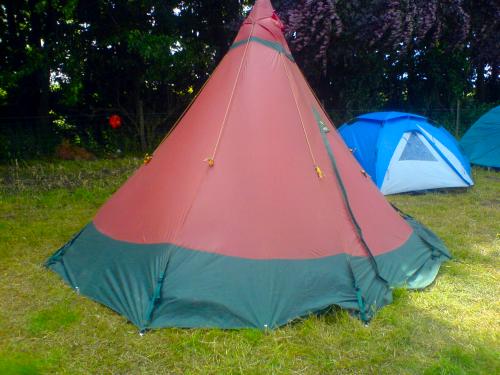 There seems to be a fashion for Teepee type tents starting, but I think I will stick with my trusty Vango force Ten.

We had a Barbeque that evening and then into the marquee to listen to the bands. Oh, and perhaps try one or two beers!

There was a huge bonfire at one side of the field, which was lit at about ten o'clock it was quite spectacular.

The catering tent was open until about 2am so you had no need to go to bed hungry!

All in All another good weekend and many thanks to the Druids for all the time and effort spent organising it.

Read the short report about the 1981 Poser Rally by Wiz.