It's the beginning of September & time to head for the Antler Rally.

We set off on the Thursday as usual & made out first nights stop at the newly opened Glasgow Breahead Travelodge.

We have used Travelodge for single night stops many times over the years. In the past we have always been very pleased with them. Not so this time, the new type rooms have a lot less shelf space than the older ones. The room also had only one chair. One of us had to sit on the bed. (I have since heard from Travelodge. The room is apparently furnished to their latest corporate standard. Their website shows illustrative pictures to their old standard.)

This new hotel has a breakfast bar. For a fixed price you can, in theory, help yourself the cereal, fruit juice, hot food plus tea & coffee. It did not work in practice.

Friday morning had dawned misty but by the time we reached Tyndrum we were in full sun & it stayed that way until we reached the rally site.

The last eighteen miles to the rally site is my least favourite road in the UK. But I was pleased to see that some small improvements have been made since last year.

By the time we arrived on site the Loch Lomond club had set the hall & kitchen.

Preston King sent Ted a text asking about the weather at the Solent. The reply was apparently unprintable but amusing.

Ted Trett & others had become fed up of getting wet so did not do this years Antler. They went to the Solent Rally instead. Preston King sent Ted a text asking about the weather at the Solent. The reply was apparently unprintable but amusing.

We did not eat in the hall on Friday but instead went round to the Kildonan Hotel to have fish & chips. We stayed at the hotel most of the evening. Unfortunately they were having trouble dispensing beer & lagers so we only managed to get two drinks all night.

On Saturday morning we took a trip on the bike to Ardnamurchan lighthouse. Maggie & I had been sent some complimentary tickets so the museum & tower access did not cost us a penny. 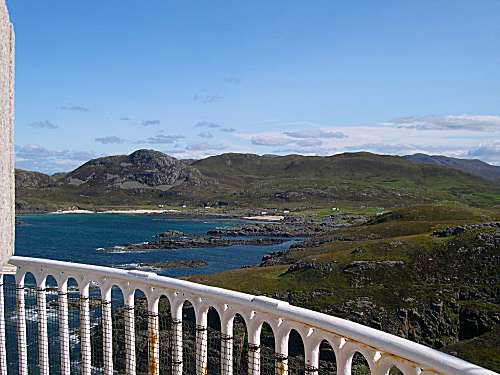 The view from the top of the tower is stunning.

The rather nice tearoom provided much needed sustenance after the trip up the tower.

In the afternoon we took a pleasant walk down passed the local shop to take a look at the Bogha Caol Ard campsite. The site is undergoing an upgrade so we decided not to camp there after the rally. We called into the shop on the way back purchased supplies & remembering the last nights beer fiasco at the hotel bought a couple of bottles of beer for me & a small bottle of wine for Maggie.

On the walk back to the rally we bumped into Derek Lockwood. He suggested that we try the campsite at Roy Bridge.

Maggie & I spent a very pleasant evening in the hall having a noggin & natter.

Sunday morning we packed up dry & said our goodbyes.

We took Derek's advice & stopped at the campsite in Roy Bridge. Derek was correct in saying it's a nice quiet site & the Roy Bridge Hotel serve a good well priced meal. They also had Red Cuillin on draught.

This report was downloaded with permission from Dave's "Old" Website.