From A to Z

Flint's rally waistcoat - roll your mousewheel on a badge to zoom in.

This section contains an alphabetic collection of .

Here is the alphabetic index. Click on a rally to see the badges.

Click badges for links to photos and reports or for a form to send your own recollections. Anything at all from those dim and distant times will be greatly appreciated. You can also tick a box to select badges for your own collection.

As well as rally badges we have a few extra badges for clubs, shows, race circuits and training schemes. You can select from those for your collection as well. 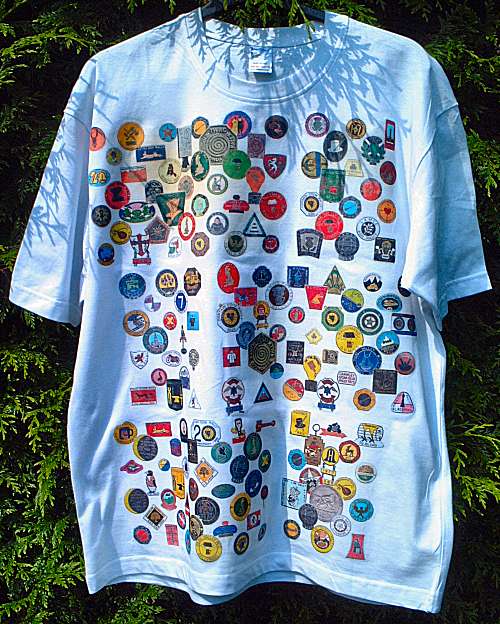 Why don't you wear your badges?

Here is your chance to wear your badges at the next motorcycle event. Follow these links to produce a unique T‑shirt. 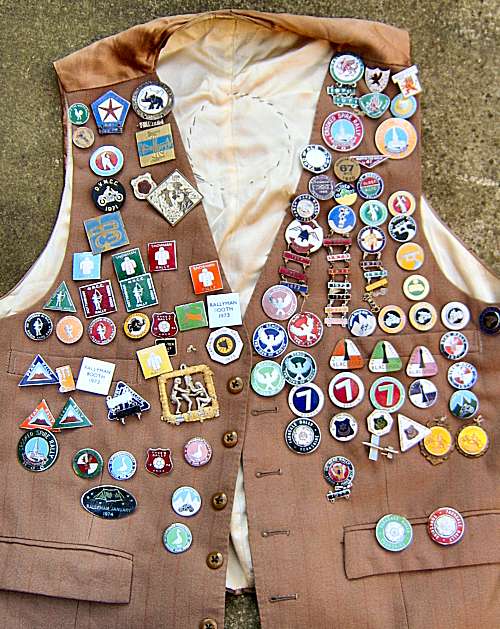 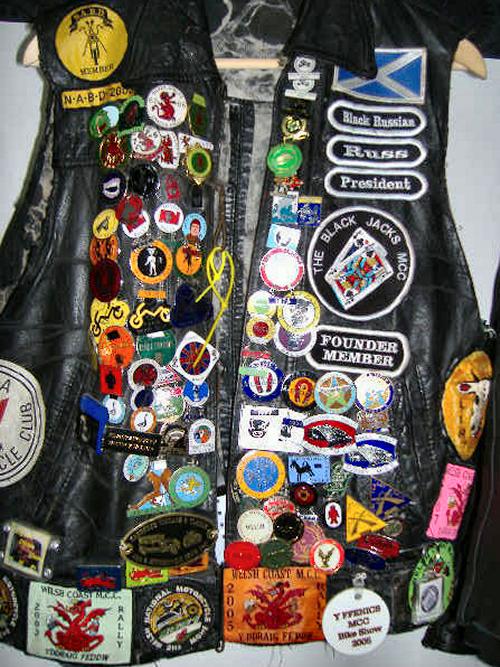 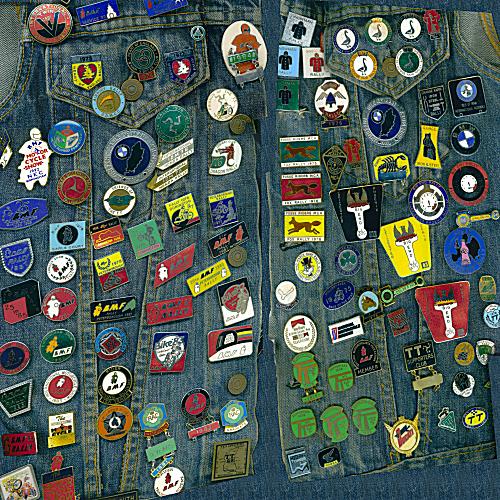 A very strong hanger holds up Heather MacGregor's waistcoat. It must weigh a ton!

Mark Mingay's venerable cutoff full of interesting stories if only Mark can recall them.

Hans Veenendaal's badges are in a bank vault. His cutoff is patched with ... er rally patches.

After nearly 30 years without a bike Neil Branham is now doing rallies again on his Guzzi V7 Classic. So far Neil has done the 2012 BMF and V Twin rallies.

Paul Mullis' waistcoat. Paul was a keen rallyman and did quite a lot of foreign rallies. He was particularly keen on the Stella, with its Safari which took place on the three days following the Stella Alpina proper. - roll your mousewheel on a badge to zoom in.
Heather MacGregor

Photo of Phil the Spill's rally jacket back in 1982 before he started to get serious about rallying. Phil rescued his jacket from the attic for his move to Scotland in 2015. Hover your mouse over the photo to see more badges.

Jean-Francois attended the following motorcycle rallies and events (in order):

I must know Dave Jackson, we went to some of the same rallies long ago. Problem is I don't remember any of them!

Heather MacGregor picked this up on ebay . No idea who it belonged to but all of the badges are from 77-79ish and it was described as a 'shed find'. Most are northern rally circuit with three from the Italian Motorcycle Owners Club.

It would be good to find out who it belonged to. Send us any clues and we'll pass them to Heather.

Some folk have one shirt for every day of the week - and they wear it every day of the week. Ted Trett, on the other hand, really seems to have one cut-off for each rally series. Here are a couple that cover the Captain Cook rallies and combined Dalesman and Rallymans from the Dean Valley club.

Heather MacGregor inherited all the badges collected by Wilf (real name Paul Bartholomew) over many years of rallying in Britain and the Continent. Heather is cleaning them up and scannning them for us. In the meantime, roll your mousewheel to zoom into Wilf's collection, remember the good times you shared and send in a paragraph about Wilf.

Send a scan of your badges or a digital photo of your waistecoat. Read the FAQ advice for sending pictures. There is also a useful entry in the 15 October 2010 Blog about photographing badges.