Organised by Otto "the impostor"

Organised is not a term you would apply to anything that Otto is involved in; this Rally just appears to "happen" most years. It is usually the last rally of the year. The invites for the 2008 do arrived just over a week before the event. I was beginning to think it was a no go. 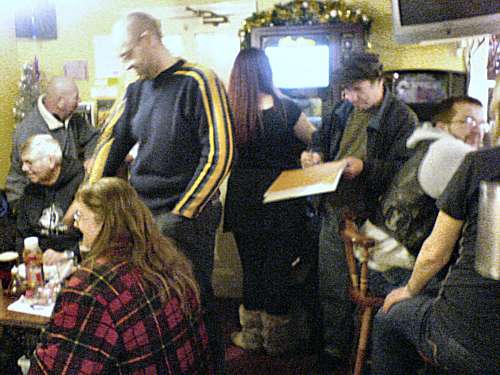 There were more awards than people at the rally.

I went down there on Saturday afternoon, and there was nobody there! Yes the rally was on, a few tents were at the back of the pub, but it is a small event and everybody had decided to go into Burton on Trent for the afternoon. Otto arrived back eventually and I managed to book in. There was a new badge again this year, (we had a few years of recycling the remaining old badges.)

Who else would want to immortalise being sick in your coffee cup by naming your Rally after it?

Otto used to produce a rally mag called Otto's Outings. He looks surprisingly similar to the image on the badge so if you meet him you will remember him! It's safe to say he is a bit of a character. However, he has managed to keep this event going for quite a few years now. He goes to rallies all over the place and is the only person I know who has done one in Iceland (the country not the shop!) 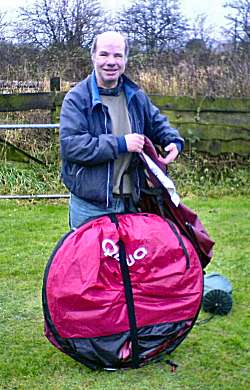 This Rally has moved around quite a bit. The first few were at The Bull I' Thorn on the Buxton - Ashbourne road, then one at the Ostrich. We also had a couple of years at Somercotes, one near Skegness, one down by Lichfield and now it's to the South of Derby.

It was a bit tricky to get to the rally this year, as all the roads surrounding the venue were flooded to some extent. I would not have attempted the road I was on, but I had caught up with an artic and a car, which I thought was allowing oncoming traffic to pass due to the narrow road. We both followed the artic, without seeing the flooded section of road ahead! I was lucky despite the water being up to the cylinders on my BM, it never missed a beat and I got through. The car almost made it but ended up stranded about twenty feet before safety. It was full of young lads so I left them to sort themselves out. A short while after I got to the rally Mary Roberts from Leicester arrived after a bit of exploring to find a dry route, then John Davies from Manchester, but he was pushing his bike as it had managed to swallow a good bit of the flood water and didn't want to run anymore. He took the plugs out and blew the water out of the cylinders and it seemed OK after that. It looks like the modern BMW's don't swim as good as the older ones! 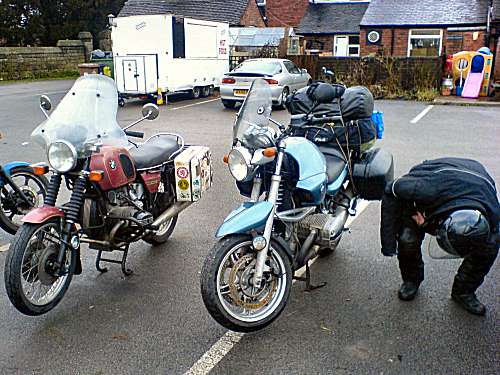 The pub usually put on a couple of bands on the Saturday night and it can get quite crowded as it is popular with the locals.

The awards and raffle at this do can be interesting. One year I think there were more awards than people at the rally and were for the most obscure things. One was for "the person who can get out here and collect it the fastest!" The raffle has been known to end up in a free for all when Otto loses track of what he is doing and the crowd gets bored! (Again, he has been known to have more raffle prizes than people at the rally!) It is always good fun when someone not with the rally wins a prize, quite what they do with camping or bike gear I don't know!

Sunday morning was mild and dry; I decided to have breakfast in the pub, unlike Brian Barnes from the Timewarp Rally Club who cooked a full English on one of the picnic tables in the car park. Why does other people's bacon always smell so good? 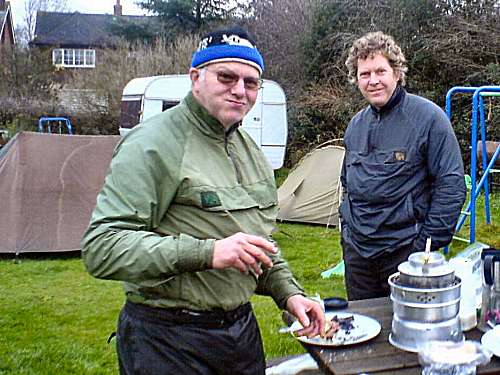 I went off visiting friends in Burton, so it was a motorway journey home again. There's not enough daylight in winter!

This is not really an event on the lines of an F.I.M. rally, but so what? It's a good excuse to ride your bike and gives you the opportunity to camp next to a pub and meet some interesting people!