Bird in the Wood Rally

Organised by the Martlets MCC at a site to the north of Lewes.

I went to this rally in 1999 & 2000 because it was close to Brighton on the weekend of Brighton Speed Trials and the Ace café / rockers reunion. 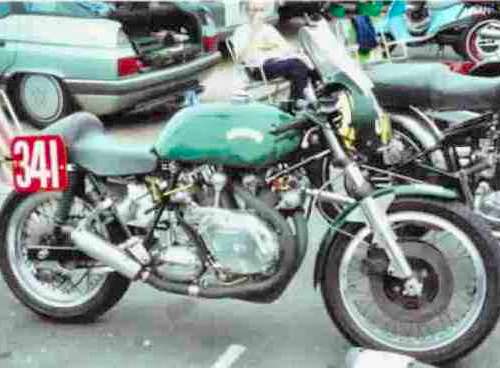 Previously I had attended the Hailsham MCC Bluebell Rally at a site about ten miles or so away, but in '99 this was cancelled.

It turned out to be a good choice. Despite not knowing anybody at the rally on the Friday night, I was made very welcome and had an excellent night.

At one stage I was co-opted into the local pubs dart team in a rallyists V locals challenge. This made the rally team's victory almost a formality! I suppose they could use the profit from all the beer I drank to pay for new wallpaper around the dartboard!

The Saturday was taken up with a ride down to Brighton to watch the sprint racing on Madeira Drive. The range of vehicles taking part was incredible, from vintage Bentleys to the latest Maclaren Mercedes and bikewise plenty of classic and vintage stuff and a fair few modern drag race bikes.

Back at the rally the evening went as usual with new friends and a few old ones from the Mayflower MCC. Out and around the bonfire, one of the members of a backpatch club had a memorable rally when his firewalking exploits went badly wrong. I think the local A&E sorted him out!!

On the Sunday it was back down to Brighton for the Ace Café Rockers reunion, again on Madeira Drive. Today though you can't move for classic British bikes, as thousands of people gather for what has become one of Brighton's biggest events. It's a real trip back in time as a lot of people dress for the occasion and the atmosphere is very '60s.

Another excellent event, the only problem being I have work on Monday so it's a long slog back up the motorway to Bradford.