This rally was held near to Preston towards the end of September.

One year the club had use of a local social club and packed it out. A few members of the social club complained that they could not get served so the motorcyclists got thrown out. Minibuses were organised to take motorcyclists into town where they spread through the local hostelries. When the pubs shut every street corner had a score of bikers standing around waiting for a minibus and amusing themselves by throwing bottles back and forth. 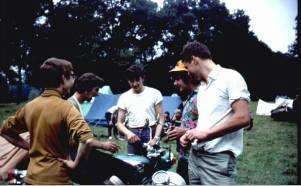 Blackpool was a bike ride away and the pleasure beach was always popular. A lot of energy was worn off in the House of Fun that had some metal surfaced slides and rollers. These were especially hard to cross if you had metal segs on the soles of your motorcycle boots.

We stopped for fuel on the dual carriageway from town and all turned when we heard a thump from the opposite carriageway. We were in time to see a woman pedestrian land after being thrown into the air by a car.

On a later rally Gordon Wallace and I got rained off while making our way up the M6 on the Friday night. That was the rally that Terry Reynolds picked up a hitchhiker and hardly came out of his tent all weekend.

The club also visited the Blackpool Motorcycle Show when that was still being held.

Ted Trett kept the 1978 Rally programme in case he needed it for the bus back.
Click the page to turn it over.

This was one picked off Pete Whitsmith's rally list. I jumped on the old BSA A10 outfit and crawled up the M6. It used to take me just over an hour to get from my parents' house to get to the services at Keele 44 miles, where after the crawl up the hill at 40mph I had to stop to let the bike cool off. Then it was back to slipstreaming the slower moving lorries at about 55mph. It used to make a difference of about 5mph. I once remember seeing Roy Dewis (rally organiser of the Antelope Rally) come hammering past me at about 85mph on his 750 Honda Four on his way to the Bulldog rally. He got there 4 hours sooner than I did!

Well I eventually got off the M6 at junction 32 on to the road to Blackpool and followed the Castrol signs to the rally at Woodplumpton, (bit of old farm), signed in, tent erected. Now what to do for a couple of hours? Why I'll go and have a look at Blackpool. I parked up on the sea front and had a walk down the Golden Mile and a walk back, got on the bike and drove back to the camp site. Some people like Blackpool, go every year, same guest house. It did nothing for me.

I was on my own so I must have had some sort of a quiet time, but when I got back to the camp site there was something extra laid on; an XX rated film to be shown in what I can only describe as an old chicken coop. I had a hot dog from some source near by. I don't think it was Yorkie - it was rancid. I can still taste it now yuuk, and the film was being run. It was an American film called Mechanised Death and dealt with road accidents. Actual footage from police and fire services, bodies and parts, nothing held back, a real eye opener. The main message was that it was not speed that kills but what goes with it, fatigue, drink, inattention.

Not one of the best rallies I've been to but nowhere near the worst.