Held in February in the early Eighties by Clifton and District MCC.

This was a smaller event than the other Clifton rally, the Goose Fair. Just basic facilities, no marquee or on site bar. The field used was next to the road and was a bit hilly, but no problem for the SP 370 Suzuki I used in winter then. 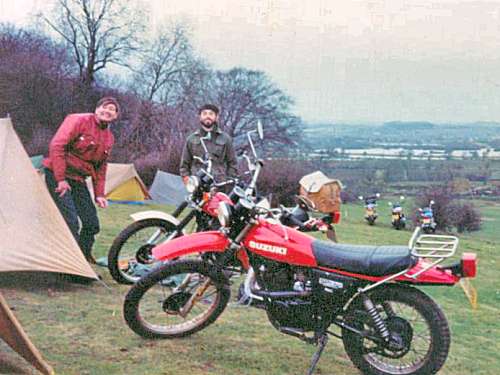 As usual the main rally pub was The Man of Trent, with the more adventurous going through Clifton estate down to the Peacock.

There was a bonfire on the Saturday night and I seem to remember that Ivor from the 41 club turned up and helped out with the late night singing.

One of the years there had been really heavy rain the week before and during the rally but, other than a bit more of a struggle to get up to the top of the site, we were not affected by the floods.

The picture shows Barry Clark and Richard Walker (Monty) from Dean Valley MCC preparing to pack up in the rain and brave the floods!

This field is now a housing estate!