I went to this rally about 5 years running, along with others from our club the Tees Tornadoes. 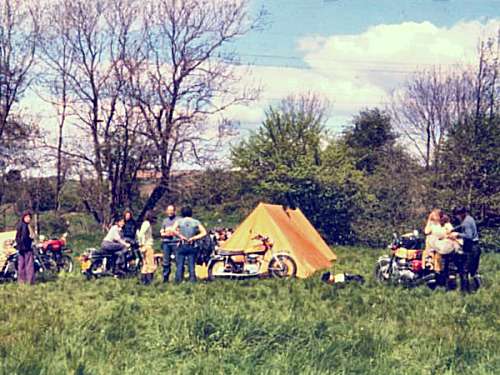 The site as far as I can remember was near Hebden Bridge. The pub we went to was up a long hill. We had a fantastic night in there with the locals, who didn't seem too put out by hoards of singing bikers.

Johnny 'The Vicar' was there and he was on top form chatting up the local girls and telling them stories. They were really taken with him. Later in the night he asked them how they were getting home. They replied "Walking, it's not far."

We all knew The Vicar was walking like us, so we wondered what he was up to.

When we left the pub the local girls started making their way towards the parked cars, wondering which one was going to run them home. They turned to the Vicar.

The Vicar suddenly produced a big bull whip and, cracking it in the general direction of these girls, he shouted "RUN, RUN GO ON RUN" and he chased them down the road.

I can't remember which was louder, the lads' laughing, or the girls' screaming.

On the way back to the campsite some of our club took a shortcut across a field. One of them, John, walked straight into a quagmire. He sunk up to his knees in mud, lost his balance and fell backwards in it. He got back to his feet only to fall forwards in it. Two or three lads came to his assistance and dragged him out. He was covered head to foot!

The next day his clothes were laid out on top of the tent, drying in the sunlight and looking like brown cardboard cutouts.

It was a great rally.

The SX650 only had a small petrol tank and the reserve was in the region of 5 miles. It had caught me out twice so I liked to keep it topped up. When I spotted a petrol station we pulled in. Only a couple of the group wanted fuel and some old chap was filling up a car. The car drove off and the old boy went back to the till in the kiosk. Another car pulled in and the old chap came out and served him. When he eventually came over to serve me I gave him some grief about serving people in turn and I think it must have flustered him a little. I gave him a £5 note for the petrol. He wandered over to the kiosk, came back and called me a "cheeky young bugger" and gave me change for a £10 note. I nearly spun the wheel getting off the forecourt!!!

We were soon on the M6 heading north for Preston where we turned off and headed east towards Blackburn but we had to keep stopping every few miles; we were loosing the last man down the lanes. We all stopped to find out what the problem was. As the last man Alan Barclay (The Banker) was having trouble keeping up. He was on his H-D Electra Glide. It just didn't want to glide around English country lanes at the sort of speed we were going. The Banker said that he knew where the campsite was in Wakefield and he'd see us there later as indeed he did.

At the back of Mitchells camping shop (thanks for jogging the memory Dave Honneyman) we all met up later and had a whale of a time in the pub up the hill to the right exiting the camp-site.