I popped into a local bike shop to pick up a battery that I had ordered, and noticed a flyer on the wall for this rally. I knew Fred Basterfield was one of the "old school" of rallyists and was a member of the Moonshiners Club. So totally on the spur of the moment I enquired where it was to take place. "The Unicorn" at Hampton Loade the old Severn Rally site from the late 60s and early 70s not a million miles away so I'm set for a great Saturday evening.

Saturday morning time to double check the camping gear. Good job I did. I found that an apex piece had fallen out of my peg bag and I would not have been able to have erected the force ten without it! I set off at mid-day and arrived at the rally site around 12.40. Bloody road works and a 3 way set of traffic lights at the western side of the river in Bridgnorth were creating havoc. As I signed in and got the tent erected the weather was bright and windy. My, they have made some alterations to the site and the pub. There are two bars there now replacing the old 7 foot long one of yesteryear. The building has been extended twice from the look of things and a great conservatory has been added and gone is the open air men's toilet - that's an improvement on it's own. The field has been lengthened and there are a lot of static caravans there. Still that's enough about that.

As I went to fetch some water I overheard someone say that the train to Bridgnorth was leaving in half an hour and, as Fred had said that's where people go on Saturday for a look around and a drink in Wetherspoons, I'm game for that! 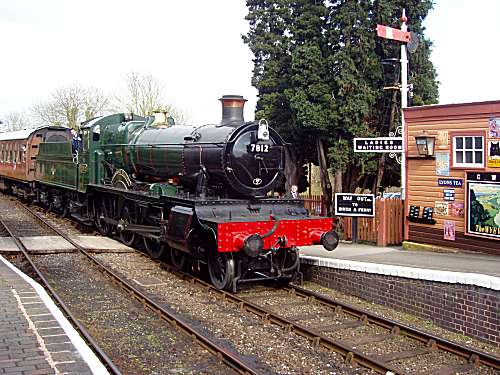 The 1930s steam train arrived on better time than British Rail and off we went, £7-50 might seem at first a little expensive for a return ticket until you consider how much a taxi would have cost for the same service. We had a wander around the historic market town, a couple of three pints and a bite to eat and caught the train back to the rally site. The train was full of families and anoraks and bikers, what a combination.

Back at the site it was straight into the pub, nothing changes. It was slow to start but as soon as a few people came in it picked up well. Five or six real extroverts came and sat at the table by me and in no time at all we were in stitches. They were from the Tipton area, salt of the earth type, no holds barred and no prisoners taken. Around half past eight some chap turned up and right next to where I was sat, started to set up an amplifier, guitar and sound system. Time to leave. I relocated into the next room as did many others as soon as he started to play, as Fred said, he could not sing, the music we coming out of his lap top and the sheer volume covered up all the mistakes.

We chattered away about old times and plenty of other things until around 11.00 when I'd had enough and called it a day. I walked down to the camp fire, or rather a brazier by the control tent. Someone had parked a red Rover there with the CD player blasting away. I had pitched at the far end of the field and forgotten to bring my ear plugs, but when I reached the tent the only sound I could hear was the water from the treatment plant cascading into the river Severn. I was out like a light.

I awoke about 4.00, call of nature, and I had great difficulty getting to my feet. No it was not the quantity of beer I had consumed but the now healing broken wrist compounded by my game knee. I could not push my self up, unable to take the weight on my wrist, I had to use my elbow on the pannier. Real countryside campsite - as I lay there for the next couple of hours we had the full works, ducks quacking, wood pigeon cooing, sheep bleating and even woodpeckers peckering followed by farmers shotgunning.

Half past seven I got up and washed in warm water in the site toilet. It makes a hell of change than just under a cold running tap (I must be getting soft!) The free coffee was very welcome, thank you Moonshiners.

The tent was packed away, bike loaded and I had a wander around the site looking for Gordon Payton whom I have known for the best part of 40 years, since he came to my aid when I broke down on the M5. He's still driving the same BSA combo albeit now fitted with a mini engine.