I had attended a couple or three Captain Cook rallies in past years so when it was mentioned that it was to be the 40th bash in 2008 and a few of the old faces were going to be there I just had to pre-book. It it was going to be a four day bash being the bank holiday weekend, but at my age I don't think I could have managed to survive that. 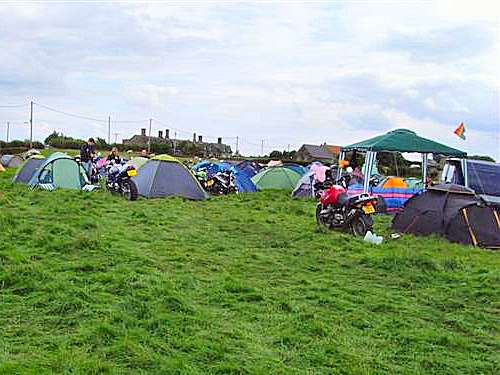 It reminded me of many long gone Sunday mornings at rallies of yesteryear, cool, clear, bright, fresh.

I got up early on Saturday morning and did the household chores before loading the bike and setting off at 10.30 (I should have loaded the day before). I dropped down onto the A5 then on to the A38 to Derby to cross the country then turn north to join the M1. But as I was about 15 miles from the M1, touring along at 80 on the A38, I saw a car about 1/3 of a mile in front lose it in the fast lane, into the central reservation and spin off on to the hard shoulder backwards! Dirt, dust, debris and tyre smoke across all three lanes! A good spin of about 470 degrees, he was very lucky not to have flipped over or hit anything else. I shut off and back braked lightly whilst flapping my left arm up and down to warn people behind me. I went past at about 25mph. The front bumper was across lane 2, lane 3 was half blocked and cars were in lane 1 as was the driver. The female passenger was having a screaming fit on the hard shoulder. No point me stopping, the Captain was calling! 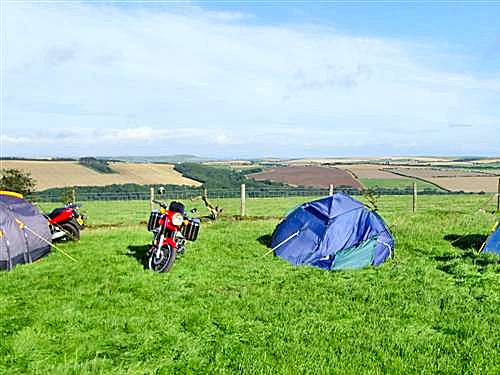 The rest of the ride was uneventful apart from a couple of slugs of slow moving traffic at road works and an intersection. Steve Giddens sent me a text message to warn me of police activities on the A171, but I didn't look at my phone until I was at the rally. They were pulling up the sports bike lads and there was a mobile cinema and safety talk to get them to slow down. 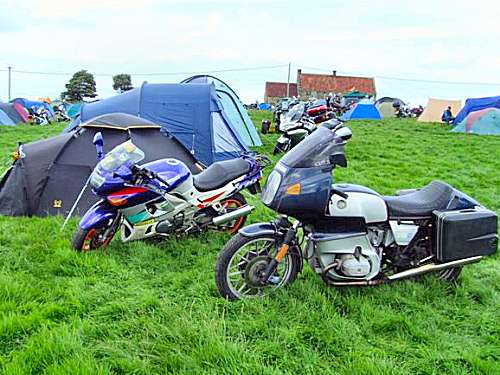 A pleasant drive in good weather to the rally site and sat outside the control was Bob Lee and companion, Sid and Christine Beaumont, Steve Giddens and Ted Trett, who managed to flog me a souvenir 40th anniversary tee shirt (ever thought of a career in marketing Ted?) a lot of the people there (or rather, not there) had taken the coach ride into Whitby which was due back around 5ish but in the mean time there was a gentleman waiting for me in the bar - no less a person than the godfather of rallying Johnny Croxson "The Vicar" whom I had not seen for the best part of 30 years! He was there with his wife Margaret and another couple Pete and his wife. We talked over old times and the vicar recounted a tale of one of the early Dragon Rallies that he had attended. The lads had caught someone stealing the girling units from off a Triumph and didn't know what to do about it, so they asked the Vicar for his view on the matter. The reply came off the cuff "hang him" not thinking for one moment that they would. Awhile later The Vicar looks around to see this hapless chap being dragged towards a tree with a length of tow rope round his neck and ran over to stop them. They had trouble to untie the knot in the wet rope and the Vicar thought if they had have gone ahead that it would have been a case of "Well the Vicar told us to hang him!" 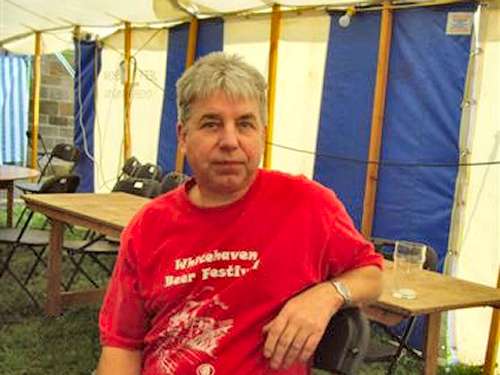 We were sat in the tent when the first coach arrived back at 5.00pm and Dave Honeyman came over to talk to us. We later moved in to a covered area with a solid floor; the grass was getting a little muddy. The disco started and the choice of music was good, not too heavy and not too loud. The hog roast was delivered and served up on time - very tasty, a credit to all involved. The band started up and it was not the ear splitting row that I was expecting - you could actually talk and be heard above it. The cider was flowing until mid-night when I returned to the tent leaving a good crowd still enjoying themselves.

The rain lashing down at around 4.00am woke me up. It stopped around 6 and I got up at 7.30 for the toilet and a cup of coffee. It was a clear sky over the sea but dark clouds to the west, from which direction the wind was blowing quite strongly. There was a brave soul still drinking a bottle of beer. From all acounts he had not been to bed yet! I walked around the campsite for an hour or so looking at the assorted bikes and trikes. The sky had cleared but the wind was still strong and a little chilly. It reminded me of many long gone Sunday mornings at rallies of yesteryear, cool, clear, bright, fresh.

I heard Steve Stiring and got two more coffees from the control and started the breakfast. Having eaten, packed and said our goodbyes, we set off homewards bound as the brave souls stopping for another day were boarding the coach for another day in Whitby. Yes another fine rally with good company. 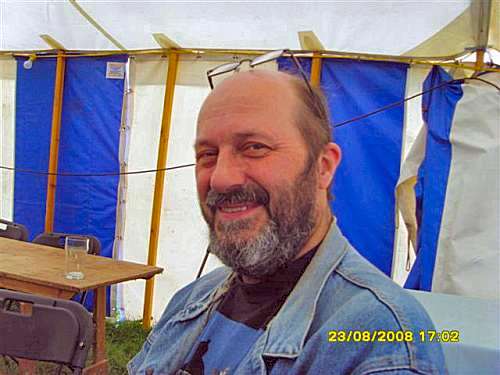 Oh! I forgot to thank the organisers for the enamelled side stand plate that they provided us with. It beats a baked beans tin any day and a cleverly designed pin on the plate means that you don't have to fumble in your pockets to find it. Just pin it to your jacket. (See the size of this badge)