The Crann Tara, or Fiery Cross to us Sassenachs, is organised by Forth Valley MCC, and is a more laid back less formal Rally than their winter do, the Thistle Rally. 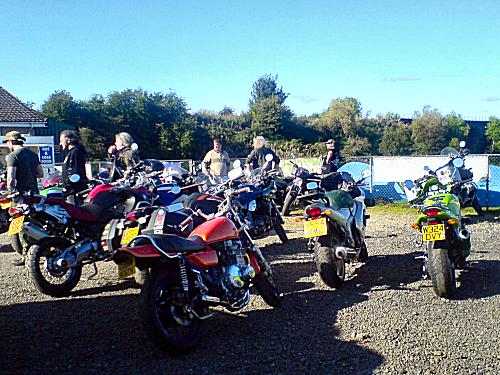 This year due to problems with the pricing of the old site, a new venue was found near to Perth, but it left things a bit tight time wise. I got my invite by email about 4 weeks before the Rally. It didn't seem to affect the turn out though, the usual faces were there and a good time was had by all. Also due to the rush there was no badge this year, but we all got an embroidered patch.

... the type of riding which keeps me going to rallies!

I like to use the A68 up to Edinburgh when I can. For the journey from Bradford on this trip up past Perth it's not as quick as the M6 M74 option, but it is more of the type of riding which keeps me going to rallies! The speed cameras on the Scottish section of the road would be a bit of a pain if they hadn't all been equipped with fluorescent yellow stickers. However the stickers are only on the back of them but the forward facing ones on the other side of the road seem to be equipped with a bright strobe light which goes off just as you get on to the white stripes on the road surface, it's quite handy that or otherwise you would miss seeing them ... only joking officer!

I arrived in good time after a dry Friday afternoon ride and set my tent up at the edge of the football field. Nice and flat and well cut. Carrying all the gear down from the car park was a bit of a pain though.

I don't know what they would think about a winter rally!

After having a bite to eat I wandered off with train driver John (Mavis) to check out the local pub. It was about half a mile away, but there were two club houses next to the site where the Rally was actually based. We were hoping for some real ale, but it doesn't seem to have got to this part of Scotland yet! We were the only ones from the Rally at the Pub and, as neither of us looks or dresses in bike gear when not actually on the bike, we were taken to be "civilians". It was quite interesting listening to the locals talking about the arrival of a load of Bikers at the football club again for the weekend. They were surprisingly positive about it and seemed impressed by the fact that so much alcohol could be consumed with so little trouble compared to other events they have there. They also seemed to think camping out for the weekend in the cold was impressive too. I don't know what they would think about a winter rally!

Saturday was another fine sunny day. After the usual late breakfast I had a wander round the car park to see what was there. I have never seen a bike fitted with a horses saddle before. It looked comfortable, but I think the Harley one was better!

There was also a nice EML / super Blackbird outfit with hub centre steering. I hate to think how much it must have cost the Danish owner as they have a very high rate luxury tax there and it would have been expensive to start with. 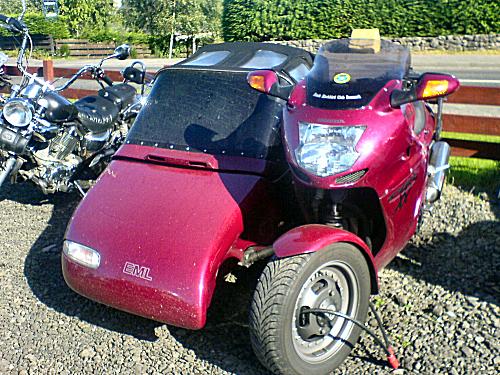 The weather was so nice I had to go out for a ride on my bike. A few of the others caught the bus into Perth to check out the pub situation there.

In this still place, remote from men,
Sleeps Ossian in the narrow Glen.

I had a look across to Amulree (one of the former sites of this rally and the Thistle) and then down through Sma' Glen to Crieff.

When I got back several more people had arrived, including Roy Watkinson who had just got back from a holiday in Austria and on Friday had been rebuilding a gearbox for one of the Twits club members down near Heathrow airport! 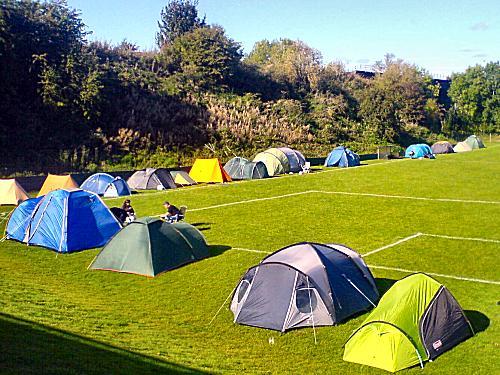 Saturday night was spent in the bowling club across the road from the site, there was a band on in the concert room, but I can't comment on them because I never actually went in there! The bar staff were very friendly and we were made very welcome. Several of our party, Jim Twaddle in particular, seemed to be getting quite large amounts of whisky per serving for some reason; perhaps he looked thirsty!

The trip home was again down the A68 with a stop at the biker friendly café at Rochester on the way. It had been another excellent weekend, helped by the fine dry weather.