I think this was in Hawes in the summer. It was warm enough to swim in the beck behind the campsite and the LPMCC members wandered along to swim and sunbathe. A local farmer angrily told us to shove off. "There's a lot of bikers camped downstream and I don't want that lot coming up here." he explained. "We're with them." we remarked. "They've some very nice bikes." he added, quickly changing his attitude.

Ted Trett says the first Dalesman Rally was organised by the Dean Valley MCC in 1973. Here are some of his memories of the early days: 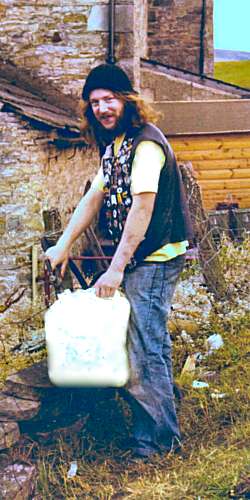 I joined the club in 1974 and helped to run the second event which was held at Stanbury Nr Haworth W. Yorks. It was a tradition for DVMCC's rallies to be held on steeply sloping fields, and this was no exception!

The nearest pub was The Herders a couple of miles away. However we had organised a shuttle service of double decker buses to take people into Colne.

The road from Haworth to Colne via Oxenhope Stanbury and Laneshaw Bridge is a great road to potter along, to stop and admire the view of the moors and the reservoirs, but in the dark with a bike loaded with camping gear and six volt electrics it proved too much for several riders. Steve Newsholme (now riding with the White Rose MCC) managed to knock down a concrete lamppost with his Triumph Bonneville. Although he removed quite a lot of skin in the process, he discharged himself from hospital and was to be seen on the Saturday night using alcohol based painkillers!

I was in Colne on the Saturday night to make sure the rally crowd all behaved properly (i.e. Drank every pub dry, taught the locals some traditional rally songs etc) We got there early, but were shocked to find we were not the first in line at the pub door. There appeared to be a group of rather scantily dressed young and not so young ladies waiting for opening time. (5.30pm uncivilised!) Dave (Hank) Hancock and a couple of others from the Potteries Phoenix club moved in rapidly. The girls said "We always come here to meet for a drink before we start work." We sympathised with the girls having to work on a Saturday, but then realised the nature of their work when they said "You look nice lads. We could start early. Do you want to do business?"

The evening passed as usual with some very fine singing which got us thrown out of a couple of pubs due to the rather Anglo Saxon nature of the lyrics of some of our songs! Drew Grant was in fine form and got the majority of the verses of his monologues in the right order! As usual he had his pet toy poodle on his shoulder most of the night!

The time came for the last bus back to camp and as we were going down the single track road we could see a bike headlamp rapidly approaching from the opposite direction. It suddenly disappeared, and when we got to where we had last seen it we found the bike and rider, still on the bike, up to his handlebars down a ditch! Willing hands and not a few helpful comments sped him on his way to Colne with a very red face.

The next stop was for two hitch hikers, walking back from the Herders. When they got on the bus downstairs, every body else came upstairs! It turned out that they had tried to take a shortcut back to the campsite across a farm but had not noticed that the "field" they were trying to cross was the green crusty surface of a silage pit! It's a good job they could swim!

The following day all we had to do was clear the field of rubbish. Steve Cawthorne had managed to borrow a Shell Sport Caravan for us to use for control so we put all the bags in there to get disposed of. Unfortunately the caravan was not collected for several weeks, and for some reason our requests to borrow a caravan for future rallies was always met with a very polite **** off!

We had to move site the following year, as the farmer said they had received a complaint from the landlord of the Herders. Apparently someone had stolen the carpet from the front lounge of his pub and we got the blame! Quite how you could roll up a huge carpet in a full pub, then carry it back two miles to a camp site, then take it home on a motorbike I don't know, but it may have been true. We once found a low bridge sign on site at a later rally at Aysgarth, complete with about a hundredweight of concrete at its base. So it proves that after enough beer anything is possible!

1975 saw us move site to Aysgarth, in a field just above the Church. For a change the field was reasonably flat, but was arranged in terraces with a steep slope between each level. These slopes proved to be a bit of a problem for some riders, any confessions here Ben?

The main pub for the Rally was the Palmer Flatt Hotel, which was just down the road from our field. We had told them we were expecting about 150 or so to turn up, but were we in for a surprise! The weather was superb and word must have got out about the rally because we ended up inundated by 620 rallyists! The pub was a lot smaller in those days, and on Friday the bar was well crowded. I was on duty as a marshall, and so had to stay until everybody had left at closing time. (Some jobs are better than others!)

The last man out was Albert Emmott (Harley Albert from Southport) I had noticed his bike parked outside and told him I was surprised that he was leaving it there. He said "I'm not, come on I'll give you a lift back!" As anyone who knew Albert will tell you, when he made up his mind to do something it was a brave man who tried to stop him! He had me by the shoulder and more or less lifted me on to the back. If the noise of the Harley wasn't enough Albert switched on his police siren to clear the way for our trip back to the rally field.

On the Saturday I had to ride back to Shipley to Allan Jefferies shop as I was trading in my Honda 500/4 for one of the new 500 twins. Well yes as we all know now, not a good move, but at the time it was supposed to be an improved version of the old CB450 "Black Bomber". It was a bit of a nightmare. The worst thing was I could have got a brand new 500/4 for about £50 quid more! My problems were solved the following summer when I wrote it off on the A9 coming back from a Claymore Rally!

Anyway back to the Dalesman Rally. The weather was warm enough for people to go swimming in the river at Aysgarth Falls . On the Saturday evening it was fortunate that it was good because the Pub was totally overwhelmed, the car park, and both sides of the road for as far as you could see was crowded with people.

This was the last year we had as an "open" rally. All future events were to be pre-booking only to keep the numbers down!

In the evening we stood opposite the pub when a car pulled up with a family who were staying at the hotel. They were intimidated by the huge crowd of rallyists. Eventually the mother and her two teenage girls, wearing hiking shorts, legged it to the pub. The father sat tight. Eventually he too made a dash. He was also wearing shorts and got as many wolf whistles as the ladies!

I remember that rally at Colne, but until reading Ted's report I could not have named it. We had to get off the delapidated bus on the way back to the camp site and push it up the road as the clutch had gone. Also the Palmer Flatts summer of 1976, swimming in the river. Great times.

I turned up at Aysgarth 5 years ago for the rally, only to find I was a week early. Eeeek! Still, had a great time. Think I did my 1st Dalesman in '78 and will be going to this year's '07.

Still do rallies, but sciatica has temporarily got me off my faithful R100CS onto a Honda Silverwing 600 superscoot.

Ted didn't mention that "Teado" (Tees Tornadoes) went for a streak that night, right around the rally-site, in the middle of the moors, moonlit and bloody freezing! ... does anyone remember the craze for streaking ... you know, stark bollock naked, running around with a big grin on your nether regions? ..... fun? .... not as we know it ...!

Smiv n I remember well the two guys who fell in the pig-shit, and then shared the smell with everyone on the bus ... thanks guys! We've never smelt anything as bad since ..... ever .....

Do I remember a link between the Dalesman Rally and the Queens Silver Jubilee celebrations in Aysgarth or is my mind playing tricks?

I remember there was a random sort of get together for the jubilee organised by Steve Cawthorne at a pub in Ripponden. There were not many there, Alan Barclay, Bernie from Stoke, Tony Cormack, Rodney Taylor, Steve, Paul Mullis and me. I apologise if I've forgotten anyone.

The Dalesman rally was held on 5th, 6th and 7th August 1977 at Aysgarth. Also that weekend was the Pilgrim, the Guildford and the Fiery Cross rallies.

The following weekend I attended the Aegir rally, the Fox rally and the Jubilee rally which was held near Dent.

Remember 1975 rally, Palmers Flatts pub, two of us had rode up to John O Groats over a week from Barnstaple, North Devon and had planned it to turn up at the rally for the weekend.

We both had 750GT Suzuki (Kettles), girlfriends on pillion. Had a great weekend, we all had a great time.

Still got the badge.

But have you still got the girlfriend?

The Bedford Eagles MCC went on mass in 1979. My Commando was sick so Nick loaned me and Anita his spare MZ250. Took a while but we got there. Cylinder head came loose - easy fix.

Had a couple of first timers with us. Initiation was being dunked in Aysgarth falls.

That's all I remember, anything else is a drunken blur.

Dalesman 1979 4th August. The day that Lorraine and I got married. We spent our honeymoon at the Rally. No nooky that night!! Frightened that some of the Bronze MCC might crash our tent.