I went to this one in 1975. It was held on Boode Farm near Braunton in North Devon and organised by Wyvern Motorcycle Touring Club which I was a member of for about 3½ years.

When they asked me if I was John Newbold I said no.

I had come off my bike a couple of weeks before and was walking using a stick. Barry Sheene's Texaco Heron Team mate

John Newbold had also come off his bike and was walking with a stick. A couple of girls mistook me for him (I did look a bit like him in those days) and when they asked me if I was John Newbold I said no.

What an idiot I was back then. 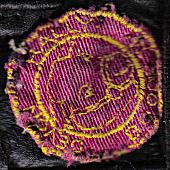 In '74 there were problems with the badge supplier and the cloth one was a last minute thing (which did not go down well as they were handed out to the rallyists). 1975 saw the red one with the motorbike which looks like a boiled sweet when it's in your hand.

The highlight of the Devon Rally was always the show put on by Dick Powell one of the organisers using his collection of bikes especially towing a sled about the size of a tea tray around the arena letting people sit on it.

Ted Trett sent an original Devon Rally programme in remarkably good condition.
Click it to turn it over.