By the time the 1971 Dragon Rally came I had passed my driving test so I took the BMW there along with Andy Hawthorne, Gaz Bennet, Mac "The Black" (could never remember his surname) a couple of other lads known by their nicknames as Poe and Prim, Bob Hughes aka Rupe or Rupert the Bear, Keiron Malett and his younger brother known as "Cowboy". 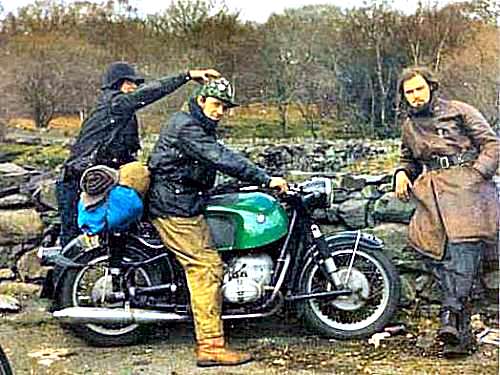 This year the weather was a little better, not rainy nor frosty and the location had changed, probably due to objections of the natives and police in Abergele. It was straight on at Llangollen to Betws-y-coed and then to Llanberis and some disused derelict army camp. As we arrived late all the prime spots to pitch tents had gone, so we ended up seperated from the main body of the ralliests on a grass bank with a good 25° slope. We all had problems trying to get the tent pegs into the ground. It wasn't quite so bad in my case, I had the dreaded igloo and could manage with 4 pegs. When God finished making the world this is where he dumped all the rubble.

On the evening we walked down the hill into the town of Llanberis and sampled some of the local ales. It must have been alright as I can't remember much about the evening apart from joining a massive queue at the chip shop on the way back to the tent. I woke up the next morning in my sleeping bag half way out of the tent. I must have turned over several times in the night and slid down the bank. And there was this strong smell of fish. Some joker behind me in the chip shop had reached over the side of the counter and nicked a piece of raw fish and put it into the hood of my tank suit.

I did the 1971 Dragon shortly after coming back from the Elephant Rally. I was on an A10 BSA sidecar outfit in fetching purple and black. My passenger was Mick Dalton. We came from London from the Saltbox MCC at Biggin Hill in Kent. I remember the cold wet mud but not much else (maybe it was the alcohol)

I do not remember Les having an Ariel VB: was it the same one that Gaz Bennett owned?

I remember Les' BMW, my father in law extracted a broken bolt stuck in one of the cylinder heads?

My memories of the 1971 rally centred on the ride there. Martin Bickley had an A7 which broke its primary chain somewhere by Capel Curig. I towed him with my TriBSA to the top of Llanberis pass and then suggested he coasted down. It was pitch dark by then and he had no lights apart from a torch but I said I would ride outboard of him. Off he went, I walked back to my bike and set off down the pass. I had to get up to about 70 to catch him, he was flying down the hill with his passenger trying to pick out the turns with the torch.

I also remember the 2000 odd bikes in Caernarvon chasing Police cars on the Saturday night. One guy in a pub had fallen off and although largely uninjured, he had lost consciousness briefly. When he came round, he was surrounded by a group of helmeted Police Officers. He initially thought he had died and was in his version of hell.

In the photo, I am standing by the front wheel of the BMW. I had forgotten that brown leather coat over a Belstaff suit but it was bloody cold!